Case Presentation: A 58-year-old-woman with no significant past medical history presented to her primary care physician with bilateral lower extremity edema. She was treated with compression stockings but returned after four months without improvement. She was diagnosed with chronic venous insufficiency and referred to a vascular surgeon for a superficial venous ablation, which was ineffective. A subsequent right leg ultrasound showed a deep venous thrombosis (DVT), for which the patient was hospitalized, started on a heparin drip, and discharged after two days on apixaban. After a week of apixaban, the swelling had worsened, so the patient was referred for a thrombectomy by interventional radiology. The venogram done during this study showed chronic thrombosis of the inferior vena cava (IVC) and iliocaval segment as well as a large, wall-adherent, filling defect in the juxtarenal IVC extending to the intrahepatic IVC. Given these findings, the patient received a CT of her abdomen and pelvis which revealed a lobulated soft tissue mass at the level of the 2nd/3rd portion of the duodenum concerning for IVC sarcoma. Imaging also showed thrombus distending the intrahepatic portion of the IVC consistent with tumor thrombus and chronic thrombosis of the infrarenal IVC involving several associated right sided veins. An inpatient biopsy was performed the following day which was diagnostic for leiomyosarcoma.The patient was discharged and referred to a surgeon who performed an exploratory laparotomy with right retroperitoneal sarcoma excision including complete thrombectomy of her IVC tumor thrombus and repair of the IVC. The patient tolerated the procedure well, and pathology confirmed a high-grade leiomyosarcoma of the IVC which extended to the margins. The patient’s right leg edema greatly improved post-operatively, and she was referred to oncology for initiation of doxorubicin/dacarbazine chemotherapy.

Discussion: Leiomyosarcomas are a subset of malignancies that originate from smooth muscle cells and can arise almost anywhere in the body. Although they may stem from blood vessels, fewer than 300 cases arising from the IVC were reported in the literature before the twenty-first century.1 Initial symptoms may include abdominal and back pain with a palpable abdominal mass, nephrotic syndrome (if the renal vein is affected), Budd-Chiari syndrome (if the hepatic vein is affected), and edema. These tumors can also cause venous thromboembolism through the stasis of blood flow, which likely occurred in this patient. Leiomyosarcoma of the IVC is typically discovered by abdominal imaging (such as a CT, MRI, or ultrasound), confirmed with a biopsy (often CT-guided given these tumors can present in locations that are technically difficult to reach), and treated with surgical excision potentially followed by radiation and/or chemotherapy.2 These tumors portend a poor prognosis, even in comparison to other leiomyosarcomas.3, 4 Despite an extensive review of the literature, we were unable to find another case of a patient presenting with only lower extremity edema found to have a DVT along with IVC leiomyosarcoma.5, 6

Conclusions: We believe that although it is rare, IVC leiomyosarcoma is a detrimental cause of lower extremity edema and DVT that should be considered in patients who do not respond to treatment and have persistent symptoms, as well as those who present with other symptoms such as abdominal pain, back pain, and generalized edema. 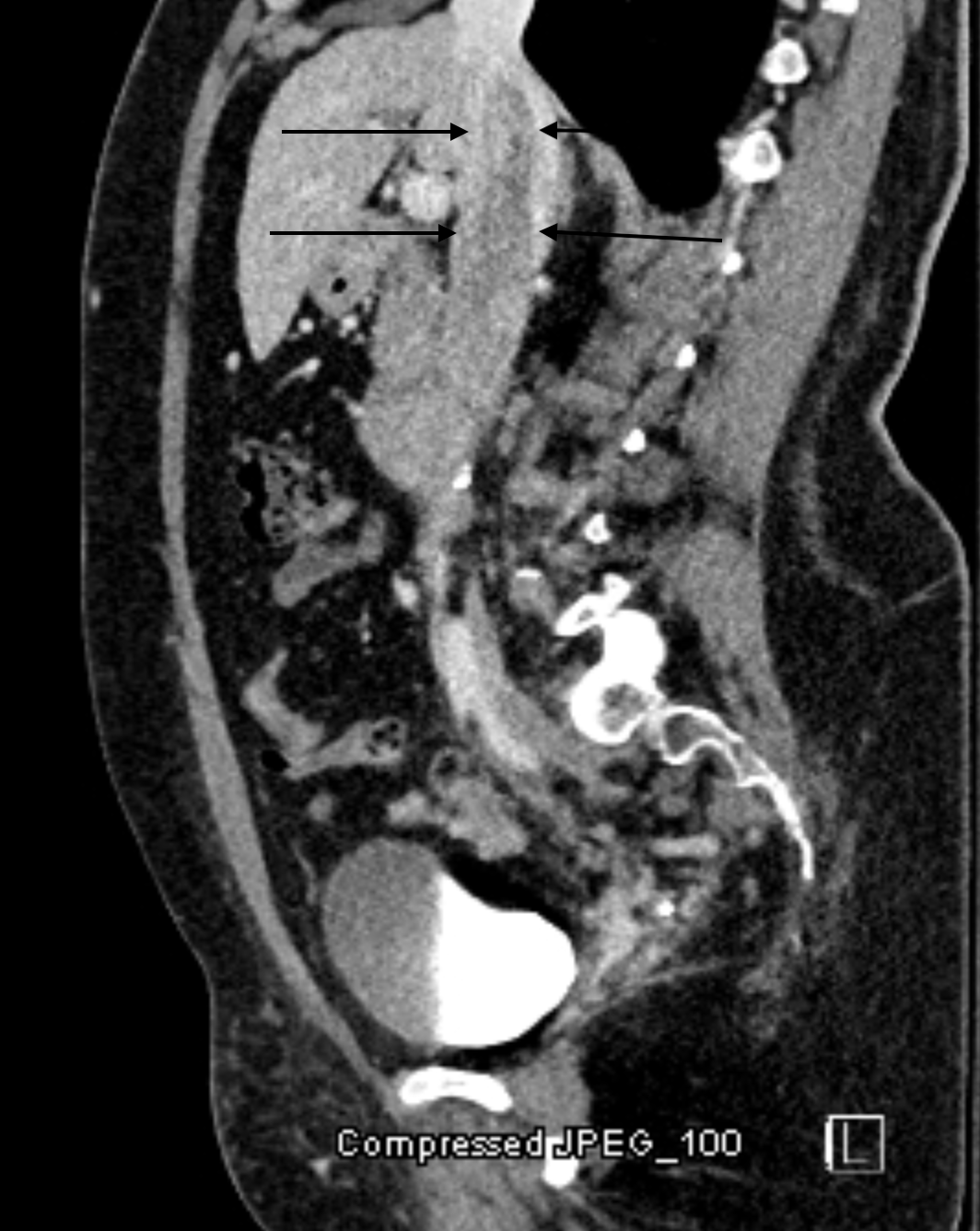