Background: Peripherally inserted central catheters (PICCs) have been associated with venous thromboembolism (VTE) and are a major cause of upper extremity deep vein thrombosis (DVT).  However, mechanisms to identify patients at greatest risk of PICC-associated VTE are limited.

Methods:  Using data from the Michigan Hospital Medicine Safety consortium, patients with PICCs that experienced symptomatic, image-confirmed upper-extremity DVT were identified. A logistic, mixed effect, two-stage model with hospital-specific random intercepts was used to identify factors associated with PICC-DVT. Points were assigned to each predictor, stratifying patients into four classes for risk of PICC-DVT. Validation was performed by internal bootstrapping with results expressed as odds ratios (OR) and 95% confidence intervals (CI).

Conclusions: The Michigan Risk Score offers a novel way to predict and categorize risk of PICC-VTE and advances the field in several ways. First, it can help identify patients at high-risk of thrombosis when considering PICC placement. Second, the tool may help inform surveillance or testing among those at high-risk in the setting of vague symptoms. Finally, the risk score could also help inform duration of anticoagulation in patients with PICC-associated thrombosis, with consideration of extended courses in those at highest risk of this event. External validation of this rule with studies that explore implementation in real-world practice are needed. 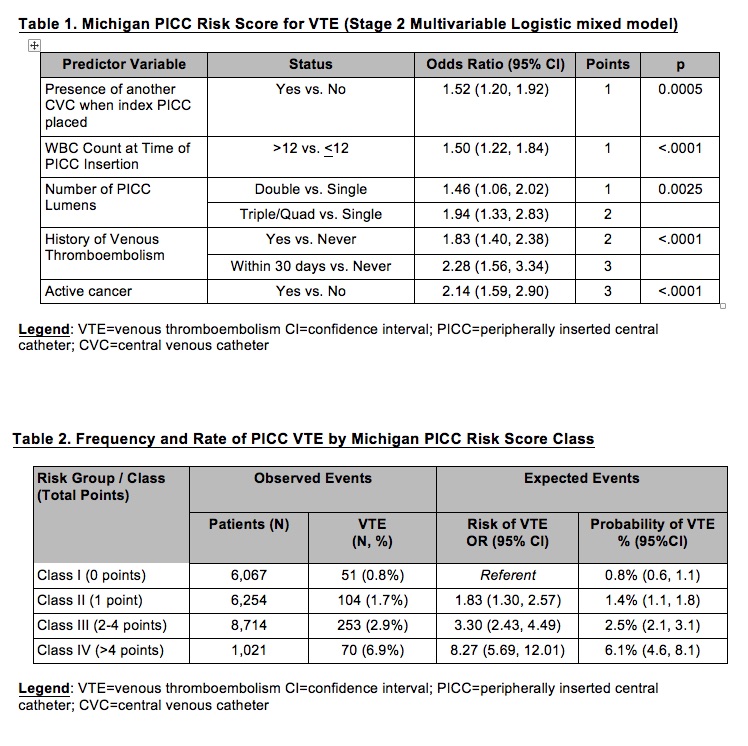