MILKY BLOOD: THE CLUE TO SOLVING THE CASE

Case Presentation: 29-year-old man with no significant medical history presented with 1 day of severe epigastric pain and multiple episodes of emesis and nausea. He denied any alcohol use.​Vitals: ​Remarkable for a heart rate of 110. ​Notable Labs & Imaging:​Bicarbonate 16 mmol/L with an anion gap of 23 ​Glucose 117 mg/dL​Lactate 2.9 mmol/L​Lipase 531 U/L​Normal liver function tests​Complete Blood Count (CBC): “Invalid” due to interference ​CT abdomen with peripancreatic fluid and stranding around the pancreas without any biliary ductal dilation or evidence of cholelithiasis.​Hospital Course:​A diagnosis of acute pancreatitis was made based on the presenting symptoms, imaging, and elevated lipase. ​Due to the “invalid” CBC results, the blood draw was examined (Figure 2), revealing a very prominent lipemic layering, making hypertriglyceridemia as the etiology for the pancreatitis.​The patient was treated with intravenous fluids and opioids for acute pancreatitis and started empirically on a continuous insulin infusion at 0.05 units/kg/h, with intravenous 5% dextrose titrated to a blood glucose level of 120-180 for acute reduction of triglyceride levels.​ Triglyceride levels returned as >4,425 mg/dL, confirming the diagnosis of hypertriglyceridemia-induced pancreatitis. With a low-fat diet, insulin infusion, and ultimately initiation of a fenofibrate, the patient’s triglyceride levels reduced to 173 mg/dL by day of discharge ​(Figure 1).

Discussion: Severe hypertriglyceridemia is the third most common cause for acute pancreatitis and has been estimated to account for nearly 9 percent of patients with acute pancreatitis1. The risk of developing acute pancreatitis increases with serum triglyceride levels: approximately 5 percent with serum triglycerides >1000 mg/dL and 10 to 20 percent with triglycerides >2000 mg/dL2. The triglycerides (TG) by itself are not toxic to the pancreas, however, the breakdown of TG into free fatty acids by pancreatic lipase causes lipotoxicity during acute pancreatitis3.​The treatment includes standard treatment of acute pancreatitis, in addition to acutely lowering serum TG with an initial goal of < 500mg/dL. While fenofibrates and dietary fat restriction are often used to decrease the serum TG levels, hospitalists may be unfamiliar with the role of insulin infusion as a modality to acutely lower serum TG levels. Insulin decreases TG by enhancing lipoprotein lipase activity, an enzyme that accelerates chylomicron hypermetabolism to glycerol and free fatty acids. Insulin also inhibits hormone-sensitive lipase in adipocytes, which is the key enzyme for breaking down adipocyte triglyceride and releasing fatty acids.4 ​The recommended initial insulin rate is 0.1 to 0.3 units/kg/hour, with 5% dextrose infusion supplemented to avoid hypoglycemia. Hospitalists may encounter an option of plasmapheresis to acutely lower TG levels, however, the evidence is primarily from observational studies. One prospective study using plasmapheresis for acute pancreatitis from hypertriglyceridemia found no statistical difference in mortality, systemic, or local complications.5

Conclusions: Hospitalists who encounter a patient with hypertriglyceridemia-induced pancreatitis should include insulin infusion as part of initial management to acutely lower triglyceride levels. Plasmapheresis remains an option, but data is limited to support this. We recommend initiating an insulin infusion while discussing the option of plasmapheresis with your endocrinology team. 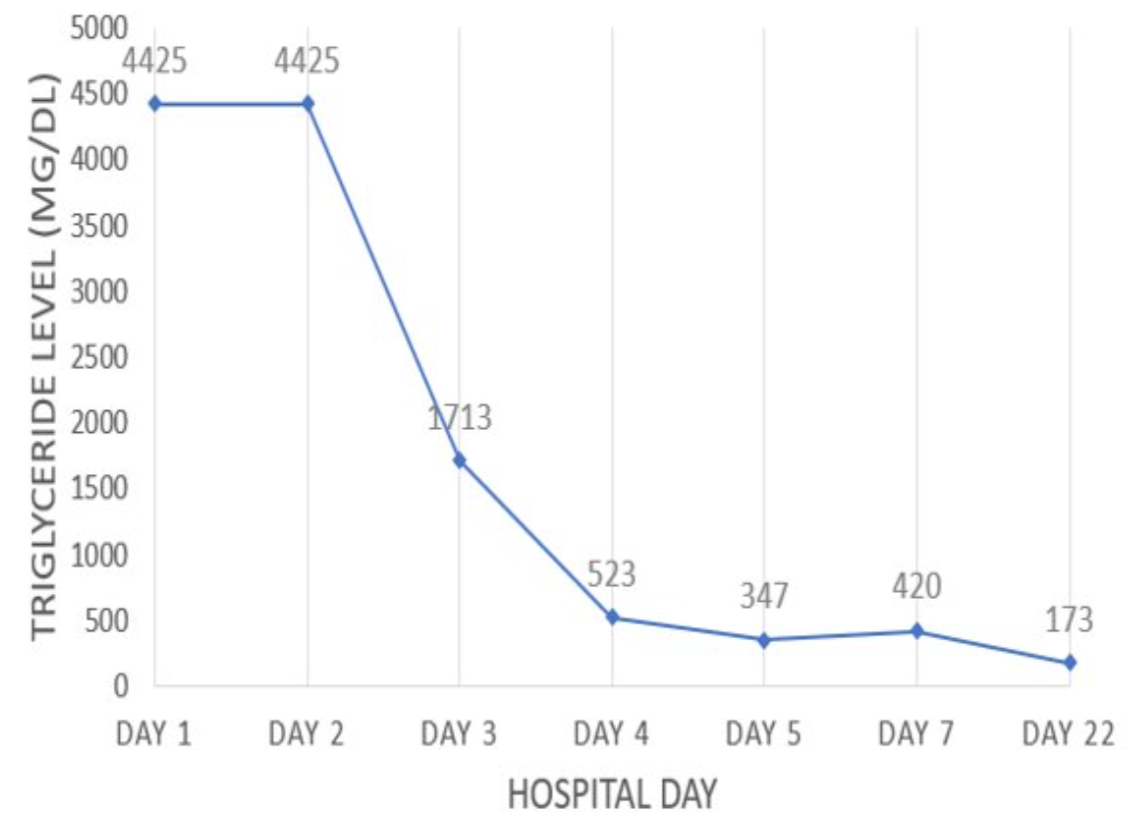 MILKY BLOOD: THE CLUE TO SOLVING THE CASE.