Case Presentation: A 25-year-old man with a past medical history of sickle cell disease was transferred to our hospital for seizure-like activity and acute renal failure. Computed tomography (CT) head was unremarkable, urine drug screen was negative, and triage labs were significant for white blood cell count (WBC) of 20.7 cells/liter and an elevated creatine phosphokinase of 669 U/L. Urinalysis showed occult blood but no WBCs, and chest x-ray was clear. He was initially started on broad spectrum antibiotics. Magnetic resonance imaging of the brain showed no acute abnormality, and several days of video electroencephalogram (EEG) showed no epileptiform activity, rather generalized rhythmic delta activity suggestive of encephalopathy. The patient’s mental status was slowed, and he was intermittently lethargic. Blood and urine cultures remained no growth, so antibiotics were discontinued. During admission, creatinine peaked at 7.2 mg/dL. Acute kidney injury was complicated by mixed anion and non-gap acidosis and hyperphosphatemia. Renal ultrasound with doppler was negative for thrombosis and hydronephrosis. Acute tubular necrosis (ATN) was diagnosed based on a fractional excretion of sodium of 1.7 and a urine sediment with muddy casts. Sodium bicarbonate and phosphate binders were administered during the peak of his renal injury. Nephrology deferred renal biopsy, owing to improvement in renal function following supportive treatment with intravenous crystalloids. The patient had epigastric pain with associated nausea and vomiting while inpatient. Lipase and liver function testing were normal. CT abdomen/pelvis showed a non-incarcerated, reducible Richter’s hernia but no additional abnormalities. At discharge, the patient had a down-trending creatinine (2.7 mg/dL), good urine output, and his mental status returned to baseline. He tolerated a regular diet with mild intermittent nausea and no reported pain. Upon further questioning, he endorsed daily synthetic marijuana (Mojo) use for several weeks prior to admission. Our multi-disciplinary team agreed on protracted synthetic marijuana abuse as the unifying etiology for his ATN, abdominal pain, reactive leukocytosis, and acute toxic encephalopathy.

Discussion: Acute kidney injury is a common entity evaluated and managed by hospitalists. Assessment of ATN requires a thorough social history, as nephrotoxins are a potential cause and are not always detected on routine urine screening tests. Previous case reports demonstrated similar presentations of synthetic cannabinoid-induced systemic toxicity. Common symptoms include nausea, vomiting, abdominal pain, and encephalopathy. Acute kidney injury is typically secondary to ATN with serum creatinine as high as 7.2 mg/dL and resolution with intravenous fluids and supportive treatment(1-5). One case report presented a patient with seizures and ATN following use of synthetic cannabinoids, similar to the present case, though our patient’s EEG captured no epileptiform activity(6). In the present case, an invasive renal biopsy was avoided as his kidney function gradually improved.

Conclusions: In a patient with ATN, acute encephalopathy, reactive leukocytosis, and intractable nausea and vomiting, consider and inquire about synthetic marijuana use. Many patients do not consider it a drug of abuse, underscoring the importance of its inclusion in a thorough social history.

IMAGE 1: Trend in Creatinine Vs. Time Since Admission 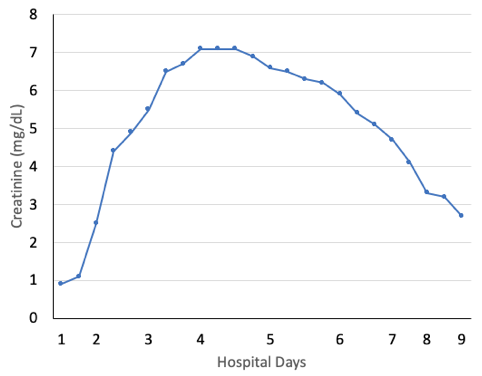