PAIN IN THE NECK: A CASE OF IGG4-RELATED DISEASE

Case Presentation: A 44 year-old African-American man presented to his primary care physician with a five day history of neck swelling and pain associated with chills, night sweats and weight loss. Three days prior to presentation, he was evaluated at a nearby emergency department and prescribed amoxicillin-clavulanic acid without improvement. Physical and laboratory examinations were normal except for four round, tender, right-sided cervical mobile masses. Computed tomography(CT) of the neck with intravenous contrast revealed bilateral, right greater than left cervical adenopathy consistent with possible lymphoma. Flexible fiberoptic laryngoscopy was normal and a fine needle aspiration was inconclusive. He completed a second course of antibiotics with trimethroprim-sulfamethoxazole, again without improvement. Given concern for malignancy, a positron emission tomography(PET) scan was performed and revealed fluorodeoxyglucose uptake in bilateral cervical, axillary and external iliac nodes. As a result, he underwent excisional lymph node biopsy and pathology was consistent with reactive lymphadenopathy without evidence of malignancy. He subsequently underwent an infectious workup which was negative. During his extensive workup, patient developed symptomatic anemia, acute kidney injury and a decrease in his serum albumin. Given his negative malignancy and infectious workup, autoimmune disease was considered. Further staining of the biopsy samples was performed, specifically for IgG4 and HHV-8. HHV-8 staining was negative, however there were greater than 50% IgG4 cells in the sample. Laboratory examination was also notable for an elevated serum IgG4 level. A diagnosis of IgG4-related disease was made and he was initiated on steroids, a mainstay in the treatment of this condition. On a subsequent visit, his symptoms had improved, but unfortunately, patient was lost to follow up.

Discussion: This case illustrates the importance of including IgG4-related disease in the differential diagnosis of tender cervical lymphadenopathy. This is most commonly caused by local head and neck pathology such as infections, or systemic pathology such as tuberculosis or malignancy. With prompt diagnosis, end organ dysfunction and morbidity would have been avoided. This case also illustrates a physician’s duty to constantly re-evaluate a case, particularly when a patient is not responding to what is presumed to be appropriate therapy. This patient was initially treated with antibiotics for presumed local infection, however, after minimal response to therapy, workup was continued, the correct diagnosis was made, and appropriate therapy was initiated.

Conclusions: IgG4-related disease is a rare immune-mediated condition with a multitude of presentations, including pancreatitis, kidney dysfunction, pneumonitis and generalized lymphadenopathy. It is very important to consider this entity in the differential diagnosis of tender cervical lymphadenopathy to hopefully avoid unnecessary morbidity and inappropriate therapies. 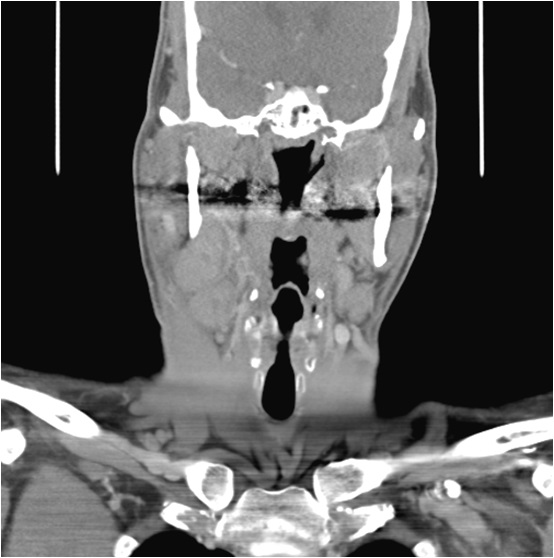 PAIN IN THE NECK: A CASE OF IGG4-RELATED DISEASE.