Case Presentation: A 14-year-old boy with autism presented with a five-day history of high fever (40.5 degrees C), vomiting, shortness of breath, and a rash involving the palms-and-soles. He was evaluated at urgent care and was believed to have hand-foot-mouth disease. He was brought to the emergency department for ongoing symptoms, where he was noted to be tachycardic to 119 beats per minute. Vital signs were otherwise within normal limits. His physical exam was notable for painful macules, papules, petechiae, and pustules on the palmar surface of bilateral hands and volar aspects of bilateral feet. He also had polyarthralgias of his hands and feet.Labs were notable for thrombocytopenia to 97,000/mm3 (reference: 130-450,000/mm3), aspartate aminotransferase (AST) level of 136 U/L (reference: 12-47 U/L) and alanine aminotransferase (ALT) level of 87 U/L (reference: 5-41). Doxycycline was started for empiric treatment of Rocky Mountain Spotted Fever (RMSF). A diagnosis of multisystem inflammatory syndrome of children (MIS-C) was entertained.On hospital day two, the patient had recurrence of fever, his rash worsened, and he continued to complain of pain, particularly at the sites of the pustules. His lab work demonstrated leukocytosis (13.4 K/MM3, ref: 3.5-13 K/MM3). The infectious disease team was consulted with recommendations to start ceftriaxone as empiric therapy for N. meningitidis. It was also revealed that the patient had a pet rat that he routinely fed out of his hands. At that time, repeat blood cultures were obtained.On hospital day three, blood cultures grew gram-negative rods, later identified as Streptobacillus moniliformis, the main causative agent of Rat Bite Fever in the Western Hemisphere. Rickettsia antibodies were found to be negative. The patient was transitioned to IV penicillin and taken off ceftriaxone and doxycycline.The patient was discharged on a seven-day course of penicillin V and outpatient follow-up with infectious disease, with complete resolution of symptoms, normalization of transaminases, and resolution of thrombocytopenia. The family elected not to keep the rat.

Discussion: Rat Bite Fever (RBF) has a death rate as high as 10% if untreated. The disease is thought to be quite rare, with only several cases reported each year. RBF is caused by exposure to the saliva, urine, or feces of an infected rodent. Infection is mainly caused by Streptobacillus moniliformis in North America, and Spirillum minus in Asia. It is likely underdiagnosed because the symptoms that characterize RBF, including fever, palmar and volar rash, pustule formation, and polyarthralgias are nonspecific. They can characterize other, more well-known diseases, such as streptococcal and staphylococcal bacteremia, Rocky Mountain spotted fever, meningococcemia, syphilis, Kawasaki disease, and the more recently, MIS-C secondary to Covid-19. While streptobacillary RBF is easily treated with penicillin, it can lead to serious complications – hepatitis, meningitis, endo-/myo-/pericarditis – and even death if untreated.

Conclusions: Our patient presented with the classic symptoms of rat-bite fever and ultimately had culture confirmation of Streptobacillus moniliformis. Rat-bite fever is rare and underdiagnosed but is important to recognize due to its high mortality rate and potential for severe complications. Our case highlights the importance of obtaining a detailed history about exposures in treating and preventing potentially catastrophic outcomes. 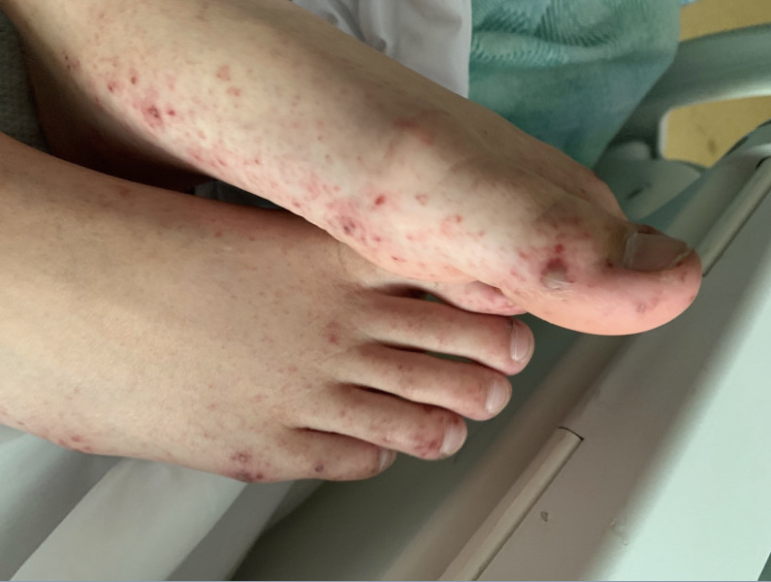