Background: The ABIM Foundation’s Choosing Wisely Campaign and The Infectious Diseases Society of America recommend against screening and treating for suspected urinary tract infections (UTI) unless patients are symptomatic or meet specific clinical parameters (1). Inappropriate testing for UTIs with urinalysis and urine cultures is prevalent in healthcare and may lead to waste in resources, longer hospitalizations, higher healthcare costs, and unnecessary treatment. As part of a project to improve high-value care and testing stewardship, we characterized the pattern of UTI testing and clinical outcomes on patients in inpatient Medicine wards.

Methods: We conducted a retrospective chart review of all urine cultures collected for patients admitted to two general medicine wards at an academic, urban tertiary care center from January 1, 2021-March 31, 2021. An institutional algorithm for appropriate urine culture testing, which included the presence of symptoms, had previously been developed to guide testing. Charts were reviewed to determine if testing followed the algorithm. Additional parameters reviewed included primary indication for urine culture testing, presence of sepsis, the result of urine culture, and if the patient received treatment.

Results: There were a total of 100 urine cultures collected during our specified period. The urine culture testing algorithm was only followed in 39% (39/100) of cases. In the cases where the algorithm was not followed (Figure 1), urine culture testing was most commonly ordered for patients with suspected sepsis in 30% (18/61), fever without sepsis 20% (12/61). Based on a review of clinical documentation, 6/61 (10%) of cases were still ultimately attributed to a UTI. Among all patients who had urine cultures sent, regardless of the result, 15% of patients were clinically diagnosed with UTI based on the documentation. 16% of cultures did return with definitively positive urine cultures, defined as > 100,000 CFU of bacteria. Among these patients with positive cultures, however, only 6 (37.5%) received antibiotics.

IMAGE 1: Descriptive Data in Cases Where Testing Algorithm for Suspected UTI Was Not Followed 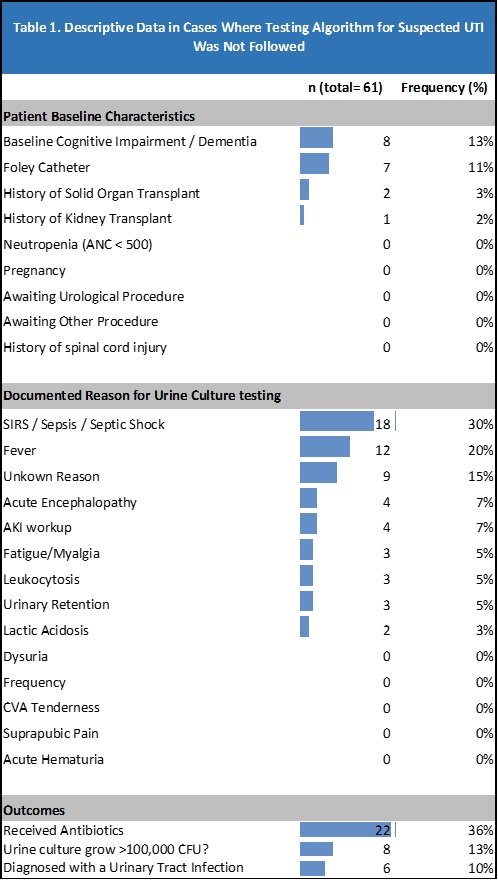