PELVIC LYMPHOCELE: AN OBSCURE CAUSE OF UNILATERAL LEG SWELLING

Case Presentation: A 57-year-old man with robotic prostatectomy 2 months ago for prostate cancer presented with 2 days of right lower extremity swelling. His history was notable for a large right lower extremity deep vein thrombosis (DVT) for which he had an IVC filter placed, and pulmonary embolus for which he was on rivaroxaban. He denied fever, chills, joint pain, muscle aches, recent trauma or falls. On examination, he had uniform non- pitting edema of the right lower extremity from ankle to thigh, without associated tenderness, deformity or skin changes. Right lower extremity pulses and sensation were intact. He was afebrile without leukocytosis. Ultrasound of the right lower extremity revealed no evidence of acute DVT, and resolution of the previous thrombus. CT scan of abdomen and pelvis identified a right groin lymphocele that was compressing the right iliac vein. Interventional radiology placed a percutaneous drain and the patient was discharged home. On follow up, his swelling had significantly improved and as there was no further drainage, the percutaneous catheter was removed.

Discussion: Unilateral leg swelling is commonly encountered and poses a diagnostic challenge. Acute unilateral lower extremity swelling is usually due to DVT or trauma, whereas lymphedema and venous insufficiency are common causes of chronic swelling. Lymphocele formation that leads to major complications after radical prostatectomy is rare, and is usually seen in the early postoperative period. However, it should be considered in patients with fever, abdominal pain or leg swelling during the late postoperative period in patients who underwent extensive lymph node dissection. Surgical treatment options are available, but percutaneous intervention is preferred.

Conclusions: Pelvic lymphocele, a collection of lymphatic fluid that develops after extensive lymphadenectomies, is not an infrequent complication after radical prostatectomy and pelvic lymphadenectomy occurring in 20% of cases. Rarely pelvic lymphocele may cause unilateral leg swelling due to its mass effect causing a diagnostic dilemma. 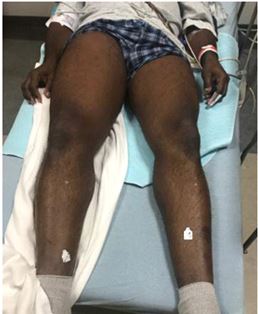 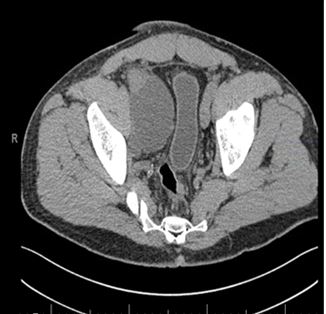 PELVIC LYMPHOCELE: AN OBSCURE CAUSE OF UNILATERAL LEG SWELLING.