Case Presentation: A 67-year-old Japanese man was brought to our hospital because of a headache. He had noticed his headache and retroorbital pain four days before and they had been getting worse gradually. Subsequently, he noticed double vision and left drooping eyelid in the morning of the day before his first visit. He did not have particular past medical history, medication and family history. On examination, his vital signs were normal but the confrontation visual field testing disclosed binasal visual field defect. His left upper eyelid showed blepharoptosis and a left ophthalmoplegia could be seen but the lateral rectus and oblique muscle of his left eye and right extraocular muscles are left intact. Also, his left pupil was a little dilated compared with right one. These findings suggested left oculomotor palsy. Laboratory studies were normal, including a blood glucose level and electrolytes. An emergent brain computed tomography scan revealed the high-density area and niveau formation of sella turcica (figure A). An enhanced brain magnetic resonance imaging also showed the pituitary tumor with niveau formation (figure B). Goldman perimeter test was performed and it also showed binasal visual field defect (figure C, the areas surrounded by a dashed line represented defective areas). The pituitary hormone function tests were normal. Because of a left oculomotor palsy, endoscopic transsphenoidal surgery was carried out for decompression on the 11th day of admission. The pathological examination documented a pituitary adenoma with hemorrhage, without evidence of infarction, which was consistent with the diagnosis of pituitary apoplexy. His left ptosis had been partially improved four days after the operation.

Discussion: Pituitary apoplexy is a rare but life-threatening disease process. Pituitary apoplexy can be the first presentation of the pituitary tumor in more than 80% of the patients. Visual disturbance is one of the important symptoms of pituitary apoplexy because some cases need early decompression of the optic apparatus for better prognosis. The most common type of visual field defect caused by a pituitary tumor is bitemporal hemianopia. However he showed binasal visual defect, which is extremely rare, only a few cases have been reported. It may be occurred by the mechanism that optic nerves were elevated by the enlarged pituitary tumor so that they were compressed at their superolateral margins bilaterally by the anterior cerebral arteries or internal carotid arteries bilaterally. The diagnosis of pituitary tumor or apoplexy is often challenging because it varies among the affected population, but a headache and visual symptoms were very specific symptoms as our case showed. Although the unusual presentation might lead to misdiagnosis, our patient’s oculomotor palsy was improved by our prompt diagnosis and early decompression.

Conclusions: Pituitary apoplexy is rare but a medical emergency. Some patients need early surgical resection for better neurological prognosis. Physicians need to have a high level of awareness of this disease when they encounter the patients those who have a headache with visual symptoms. 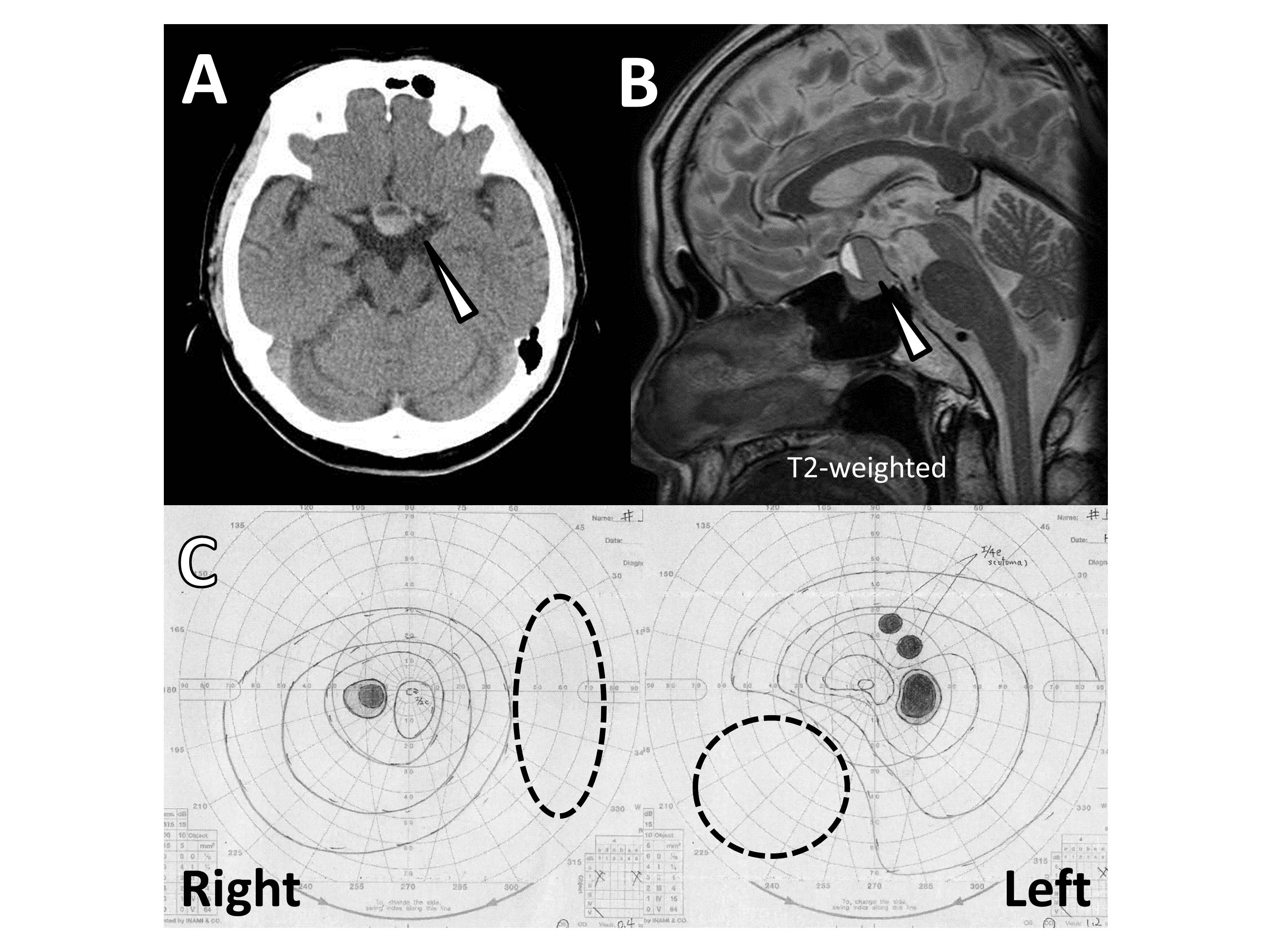