Case Presentation: An 80-year-old woman with a history of hypertension, pre-diabetes, chronic kidney disease (stage 3b), and remote ischemic stroke without residual deficits presented to the emergency department complaining of several hours of epigastric discomfort and malaise. An EKG revealed >1 mm ST segment elevation in leads V4-6 (Fig. 1). The troponin I was elevated to 1.66 ng/mL. The patient was loaded with aspirin and ticagrelor and taken directly to the cardiac cath lab. Left heart catheterization revealed embolic-appearing occlusions of the very distal apical LAD and a distal superior branch of D1, which were not amenable to PCI. On arrival to the floor, the patient’s vital signs were stable and cardiopulmonary examination was normal. The basic metabolic panel was notable for creatinine of 1.45 mg/dL, unchanged from baseline. Complete blood count revealed a hemoglobin of 17 g/dl and hematocrit of 51% with an MCV of 101.6, white blood cell count of 12.2 k/ul, and platelet count of 381 k/ul. The hemoglobin A1C was 5.7% and the lipid panel was notable for LDL of 70 mg/dL and HDL of 55 mg/dL. Transthoracic echocardiography revealed apical akinesis with mildly decreased left ventricular ejection. There were no intracardiac masses and no PFO was identified on dedicated bubble study. Telemetry monitoring revealed no sustained arrhythmia. The patient’s elevated hemoglobin prompted further workup. Erythropoietin was low-normal at 6.2 mU/mL. PCR testing for the JAK2 V617F mutation subsequently returned positive. The patient was diagnosed with polycythemia vera presenting as an acute myocardial infarction. She was seen in the hematology clinic after discharge and started on hydroxyurea 500mg daily. At her most recent follow-up, seven months post-STEMI, the patient’s hemoglobin was in the normal range and she has had no further cardiovascular events.

Discussion: In this case of an elderly woman with vascular risk factors presenting with STEMI, the initial concern was for acute coronary occlusion in the setting of plaque rupture, and the patient was appropriately taken for emergent catheterization. The finding of multiple distal occlusions on angiography raised the possibility of an embolic etiology and prompted further investigation. Popovivic et al. (2018) examined 53 cases of STEMI from coronary embolism and found the most frequent underlying condition was atrial fibrillation (28.3%). Other conditions included cardiomyopathy (n=5), endocarditis (n=4), and intracardiac tumor (n=3) as well as malignancy (n=8) and systemic autoimmune disease or antiphospholipid syndrome (n=4). Polycythemia vera has rarely been reported to present as acute myocardial infarction. In this case, there was no atrial fibrillation seen on telemetry monitoring, no evidence of underlying cardiomyopathy, no thrombus, vegetation, or tumor seen on echocardiography, and no known history of malignancy or systemic inflammatory disorder. The most conspicuous abnormality in the patient’s initial workup was her elevated hemoglobin level. Review of outpatient records showed that the patient’s hemoglobin had been increasing over the past year from a baseline around 14 g/dl to the value of 17 g/dl seen on admission. PCR testing confirmed the presence of the JAK2 V617F mutation leading to a diagnosis of polycythemia vera.

Conclusions: Polycythemia vera can present with a range of thromboembolic complications and should be on the differential for patient’s presenting with STEMI in whom catheterization suggests an etiology other than plaque rupture. 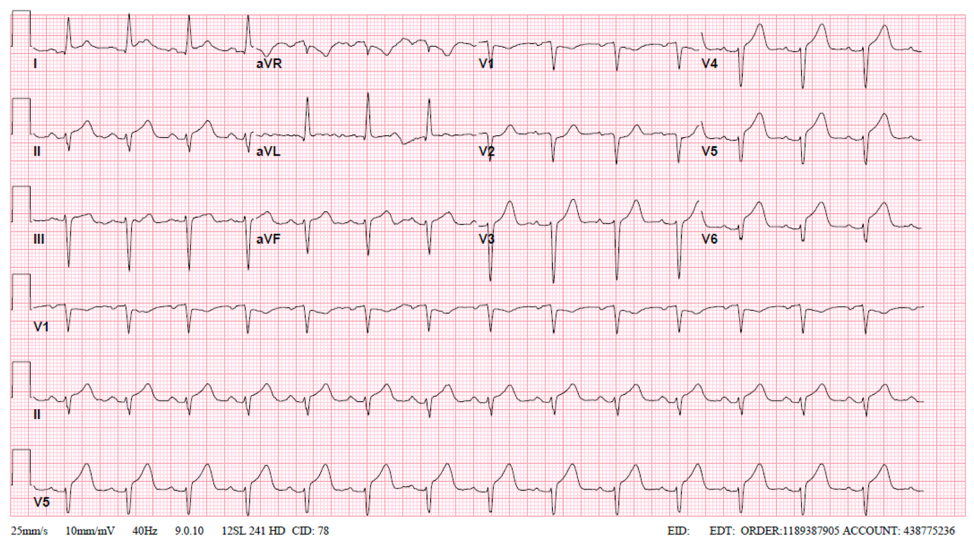