A 59 year-old female with past medical history of Hashimoto’s thyrotoxicosis was admitted because of fatigue, myalgia, acute renal injury with hematuria and proteinuria, positive p-ANCA, positive stool guaiac test, and elevated inflammatory markers. She also had a head CT and MRI done for a new onset of left foot numbness and both were negative.

Rheumatology and Infectious Disease were consulted and extensive workups were done but were non contributory. It was thought the p-ANCA could be related to her prior methimazole treatment. Chest, lower extremities, spine and abdominal imaging and PET CT were negative for obvious pathology.  In the meantime, the patient continued to have intermittent fever, worsening anemia requiring blood transfusion, and one episode of decreased grip strength in the left hand. The renal service was involved because of her worsening renal function and a renal biopsy showed changes consistent with PICGN (picture 1). The patient was started on intravenous steroids and cyclophosphamide. However, the renal function continued to deteriorate, and she was scheduled to have a perm-cath placed for hemodialysis. Just before the procedure, her systolic pressure was elevated to 220 mmHg, but later improved. Thus, she got the perm-cath and had her first hemodialysis. Shortly after, she became confused with left gaze deviation and decreased right-sided sensation to light touch. Brain MRI showed non-suppression of FLAIR signal within the sulci of the bilateral parieto-occipital lobes (picture 1), with concern for PRES.  Later, she developed seizure as well. Her neurological exam improved quickly and normalized within 24 hours. She underwent 7 cycles of plasma exchange and then discharged home on intermittent hemodialysis for 1 month.  Her immunosuppression was changed and eventually weaned off after 7 months. Her creatinine maintained at 1.8 mg/dL.

The incidence of PICGN is estimated to be 7-10 cases per million people per year in the United States.  More than 85% of patients are ANCA positive. There is evidence that ANCA plays a key role, not just as a marker of disease, but also in the pathogenesis.  If left untreated, the 1-year mortality rate is around 80%; with aggressive treatment, 5-year survival is about 75%.  Clinical presentations range from asymptomatic hematuria to rapidly progressive renal failure.  Treatment can be divided into an initial immunosuppression phase, subsequent maintenance phase, and treatment of relapses.

Both PICG and PRES are uncommon and the two occurring in a single patient is extraordinarily unusual. It highlights the importance of renal biopsy for evaluation of rapidly progressive glomerulonephritis. The case also helps us to understand medical conditions associated with PRES. 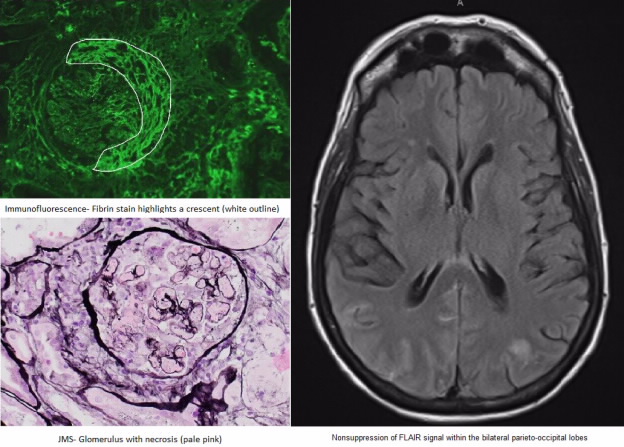