Background: There are 400,000 cases and 30,000 deaths from Clostridium difficile (C. diff) infections in the United States annually. Efforts to reduce the transmission of C. diff have focused on patients with diarrhea, however, many patients with C. diff are carriers who do not have symptoms. Because they are not isolated, carriers serve as a reservoir for transmission. Identification of carriers via a screening program, combined with isolation of the identified carriers, may reduce the transmission of C. diff. Patients from Nursing Facilities, who historically have a high risk of being carriers, may be a reasonable initial group for screening. To test feasibility, estimate the prevalence of C. diff carriers, and determine if admission from Nursing Facility is a risk for being a carrier, we established a pilot screening program.

Methods: This prospective cohort study was conducted in a large, urban, academic medical center with mostly Medicare or Medicaid eligible patients. A sample of admitted patients was approached and tested if they met the following criteria: ≥21 years old, admitted from the Emergency Department within the previous 24 hours, and on any service other than Pediatrics, Obstetrics or Psychiatry. Patients with active diarrhea or colostomy were excluded. Patients admitted from Nursing Facility were deliberately over-sampled. A C. diff carrier was any patient with a positive Toxin or Polymerase Chain Reaction test. Prevalences of C. diff carriers in the Nursing Facility and community populations were calculated, and Chi-squared testing determined whether differences in prevalence were significant. Development of symptomatic C. difficile was compared among carriers and non-carriers using Cox proportional hazards model.

Conclusions: A substantial number of C. diff carriers were detected among patients admitted to our large academic medical center. These carriers may contribute to transmission of C. diff. Our preliminary findings seem to support our hypothesis that patients from Nursing Facility are more likely to be C. diff carriers. We plan to expand the screening program to refine our estimate of the prevalence of C. diff carriers and the risk of progression to symptomatic C. diff. 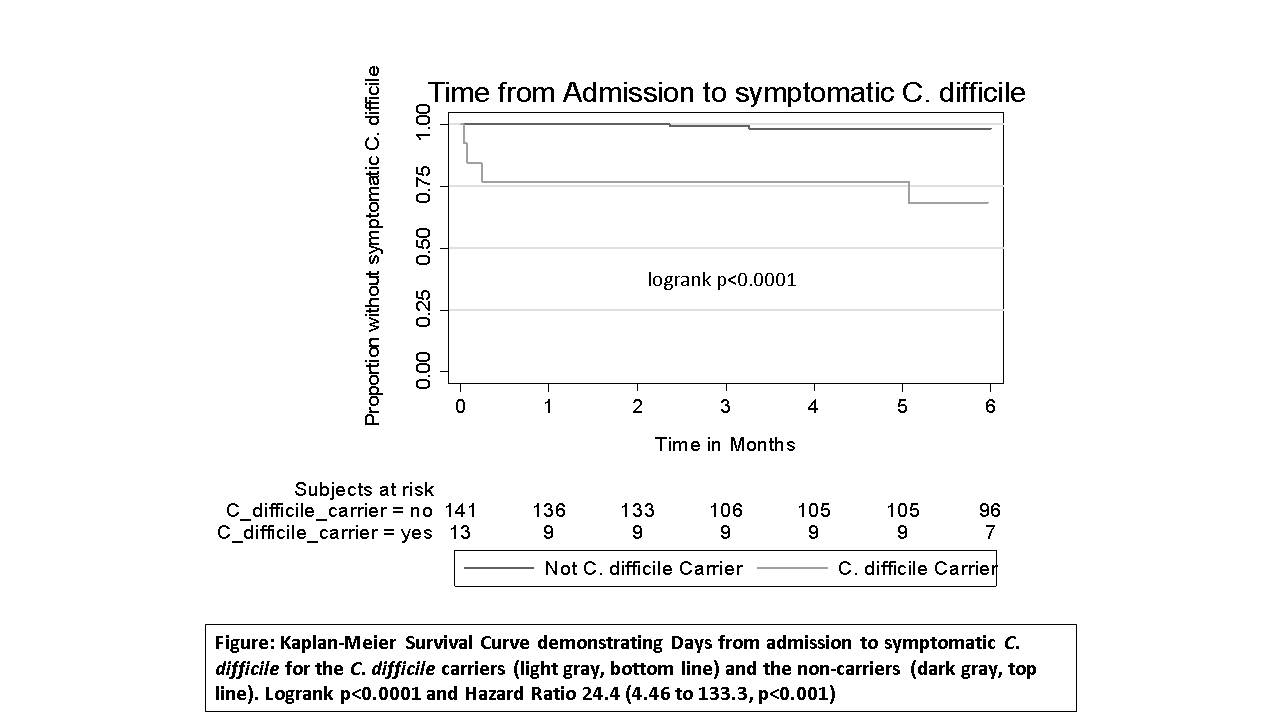