Case Presentation: An 80-year-old man with hypertension, coronary artery disease s/p PCI and new-onset depression on SSRI presented with slurred speech due to a sensation of tongue heaviness that started 3 days prior to presentation. Acute stroke was ruled out and further history revealed the patient experienced multiple falls over the past 4 years, each preceded by weakness and dizziness. Each fall precipitated a hospital visit where an acute etiology was ruled out and discharge was arranged with primary care follow-up. Due to his fear of physicians, the patient did not maintain these appointments. Furthermore, the patient’s family endorsed a yearlong history of worsening memory loss and emotional lability.
His examination was notable for dysarthric speech, impaired vertical eye movements as well as axial and cogwheel rigidity. Multiple times while mid-conversation, the patient became tearful but was unable to explain the reason for his emotional lability. Concern for a stroke prompted MRI Brain, which revealed atrophy specific to the midbrain tegmentum and corpus callosum with a relatively intact pons. The atrophy had progressed from a previous MRI 4 years earlier. After further review of the imaging, it was felt the constellation of symptoms in conjunction with the neuroimaging findings was suggestive of a diagnosis of progressive supranuclear palsy (PSP). The patient was started on Carbidopa-Levodopa for symptom alleviation and discharged with Neurology follow-up.

Discussion: This case highlights the difficulties in diagnosing PSP as more common conditions such as stroke or Parkinson’s disease are initially suspected. PSP is a rare disease with an incidence of 5.3/100,000 cases each year and typically affects men over the age of 60. Distinguishing PSP from Parkinson’s disease is challenging but some unique characteristics include axial and symmetric cogwheel rigidity, dysarthria, dysphagia and impaired vertical eye movements. Early cognitive impairment and rapidly progressing dementia precede Parkinsonian physical exam findings are unique to PSP. In Parkinson’s, cogwheel rigidity is typically unilateral and dementia doesn’t manifest until years after the initial diagnosis. MRI findings specific to PSP include an enlarged third ventricle, smaller midbrain diameter, and flattening of the superior portion of the midbrain labeled the “hummingbird sign”. Pathologically, PSP is caused by the abnormal accumulation of tau protein, resulting in deposition of neurofibrillary tangles.

Conclusions: PSP is an under-recognized disorder that is often misdiagnosed due to its non-specific symptoms. When evaluating a patient with for stroke with non-classic symptoms, such as frequent falls and mood changes, PSP, while rare, should be considered. 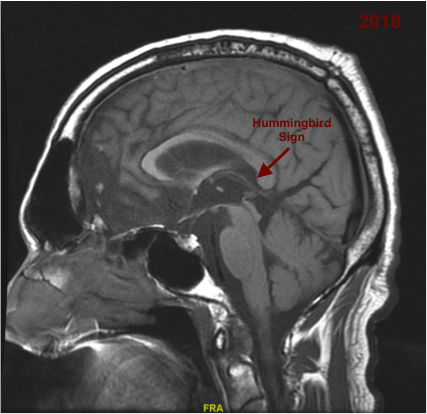