A 75 year old African American male was diagnosed with metastatic prostate cancer and refused treatment with leuprorelin and radiation, and was eventually lost to follow up.  He represented to emergency department greater than 10 years after initial diagnosis with complaints of severe fatigue, shortness of breath, headache, and worsening bone pain.  Physical exam at that time was remarkable for warty, dark brown, bulky, verrucous and well demarcated skin lesions which the patient had first noticed approximately 6 months ago, and were growing in number and size.  The largest skin lesion located over the posterior cervical region measured 5cm x 3cm x 2cm.  Several smaller lesions of similar appearance were also noted over the anterior chest wall and measured approximately 1cm x 2 cm.  Laboratory results revealed alkaline phosphatase levels greater than 700.  Suspicion for progression of metastatic disease prompted a CT chest, abdomen and pelvis which revealed extensive osteoblastic metastases to the entire visualized skeleton. In addition, extrapleural soft tissue masses and innumerable soft tissue nodules in the subcutaneous fat of the chest and abdominal wall were found, consistent with diffuse metastatic disease. The etiology of the skin lesions were unclear, and in the setting of the soft tissue nodules found on CT, we were prompted to obtain a skin biopsy.  The biopsy results revealed histopathology consistent with metastatic prostate adenocarcinoma.

Prostate cancer is the second most common cancer in men worldwide, occurring more often in African American males.  About 1 in 7 men will be diagnosed in their lifetime with prostate cancer, and 1 in 38 men will die of the disease and its complications.  Common sites of prostate metastasis include bone, lung, liver, adrenals, and pleura.  Soft tissue and subcutaneous manifestations are rare with only a few documented cases. Despite the prevalence of disease, cutaneous metastases from urologic tumors are uncommon, occurring in only 1% of patients with advanced disease and are associated with a poor prognosis. The most common urologic skin metastases originate from renal tumors, followed by bladder and finally prostate with the incidence in prostate cancer being less than 0.4%.

Cutaneous manifestations of prostatic lesions can appear similar to other more common dermatologic disorders, and therefore present a formidable diagnostic challenge for a physician, often requiring skin biopsy for diagnosis. This case represents an interesting, rarely documented advanced clinical manifestation of metastatic prostate cancer, and highlights the the complexity and aggressive potential of such a common disease process. 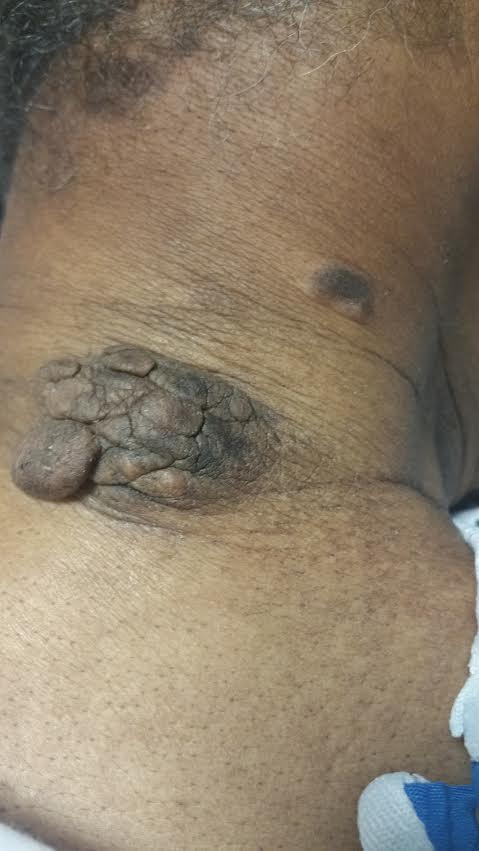