RED AS A BEET BUT NOT QUITE SO SWEET

Case Presentation: A 9 year old male with history of astrocytoma presented to the ED with a diffuse erythematous rash for 4 days and fever for 2 days. The rash was reportedly pruritic, began on his trunk, and then progressed to his extremities. It was associated with facial edema with periorbital prominence. Of note, temozolamide had been stopped 2.5 weeks prior. Additional diagnoses included seizures treated with clobazam and a pulmonary embolism treated with enoxaparin.
On arrival, the patient was afebrile with stable vital signs. Physical exam was significant for an alert, well-appearing boy with a diffuse, raised, morbilliform rash involving the trunk and extremities including the palms and soles. The rash was worse on the forearms and hands, which were also edematous. Labs were significant for 18 percent eosinophils as well as acute kidney injury (creatinine 0.7mg/dL; baseline 0.4 mg/dL). He was discharged home with outpatient follow-up. He was seen by dermatology 3 days later and directly admitted to the hospital due to persistent fevers. He was noted to have increasing eosinophil count and worsening renal function (Table 1) and was subsequently diagnosed with drug reaction with eosinophilia and systemic symptoms (DRESS) syndrome. Clobazam was discontinued and systemic corticosteroids initiated. Symptoms resolved gradually.

Discussion: DRESS syndrome is a rare, life-threatening, drug-induced hypersensitivity reaction characterized by cutaneous eruption with systemic organ involvement. The onset may be delayed 1-8 weeks after drug exposure. Within this timeframe, either temozolamide or clobazam could have been the causative agent. DRESS syndrome commonly involves the liver, kidney, and can cause leukocytosis, eosinophilia, or atypical lymphocytosis. Lymphadenopathy, pneumonitis, pancreatitis, myocarditis, and encephalitis may also be seen. This patient’s RegiSCAR DRESS validation score was 7, suggesting a “definite” case.

Conclusions: Due to its potentially life-threatening complications, recognition of DRESS syndrome in the pediatric population is critical and requires a high degree of suspicion and clinical judgement. 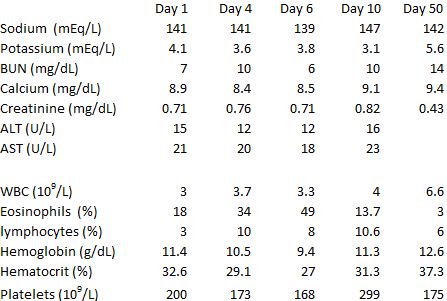 RED AS A BEET BUT NOT QUITE SO SWEET.