STRIKE ONE AND RIBS OUT: A CASE STUDY HIGHLIGHTING PAGET-SCHROETTER SYNDROME

Case Presentation: A healthy 26-year-old man with no significant past medical history presented to our hospital with right arm pain and swelling for one day. Pain was described as tight pressure with numbness worsening with movement. He had no known inciting trauma but does heavy lifting and plays baseball. He denied family history of venous thromboembolisms or clotting disorders. He denied having any chest pain or shortness of breath.On arrival to our hospital vital signs were within normal limits. On physical examination he had mild swelling of the right upper extremity (UE) with pain on movement with no evidence of skin changes and palpable pulses bilaterally. Venous doppler of right UE showed acute deep vein thrombosis (DVT) in the right subclavian vein (figure 1). CT chest confirmed no pulmonary embolism (PE). He was started on full dose enoxaparin. Given his age and acute DVT without clear etiology, vascular surgery was consulted, and Paget-Schroetter Syndrome (PSS) was diagnosed. A venogram (figure 2) was obtained and thrombectomy with catheter directed thrombolytics was performed, low dose heparin drip was subsequently initiated. He was eventually transitioned to apixaban and aspirin and discharged with outpatient follow-up with plan to consider first rib resection for thoracic outlet syndrome.

Discussion: Upper extremity DVTs account for 5-10% of all DVTs and of those PSS accounts for only 10-20%. [1-4] PSS is an effort induced thrombosis occurring in the axillary or subclavian vein associated with compression of the subclavian vein. [5] Presenting patients are often young ranging between 20-30 years of age with men more commonly affected. Patients often present with UE pain and swelling, typically after UE activity such as baseball or weightlifting. [1-6] The pathogenesis is a combination of compression and thrombosis. Repetitive movement of the involved arm strains the subclavian vein causing trauma of the endothelium initiating the coagulation cascade. [7,8]On exam the affected limb is often swollen. [9] If the limb appears cyanotic, mottled, or cool to touch there is a concern for ischemia. Motor or sensory impairment requires immediate intervention. Diagnosis is confirmed with duplex ultrasonography.The management varies on presentation. Most patients present acutely within 2 weeks of symptoms and initial management is anticoagulation and elevation to reduce swelling. The American College of Chest Physicians recommends that individuals receive anticoagulation for at least three months. [9-11] Intravenous catheter-directed thrombolysis may be considered to reduce clot burden. Chronic symptoms are treated with anticoagulation without thrombolytics. [9] However, anticoagulation will not treat the underlying condition and patients should be evaluated for urgent decompression of the thoracic outlet with first rib resection to improve long term outcomes and prevent future neurovascular compression. [8,12,13]

Conclusions: Although rare, PSS should be considered when a patient presents with upper extremity DVT of unclear etiology. The diagnosis and management of PSS varies on the presenting symptoms and may require anticoagulation with thrombolytics. Decompression of the thoracic outlet reduces future recurrence.We hope our case educates physicians to be aware of this disease as left untreated may cause persistent and severe symptoms. 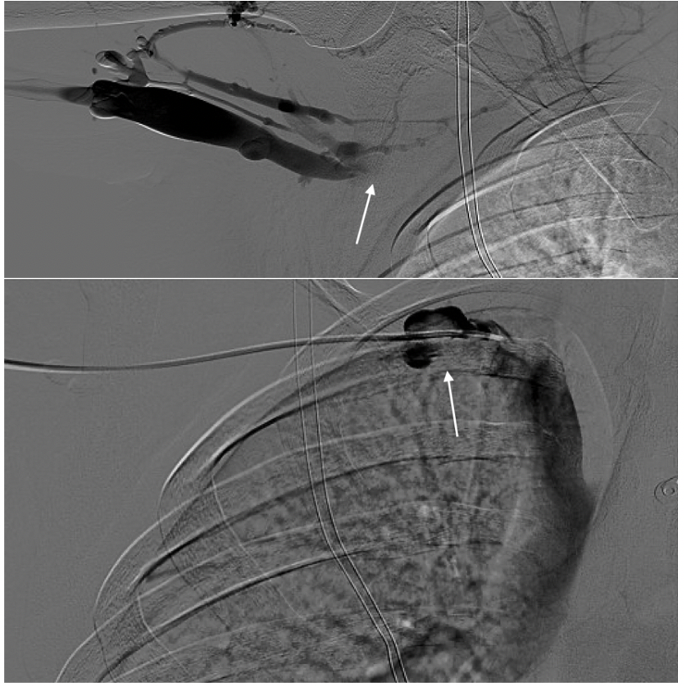 STRIKE ONE AND RIBS OUT: A CASE STUDY HIGHLIGHTING PAGET-SCHROETTER SYNDROME.