Background: We previously found that red blood cell (RBC) transfusion was a trigger for hospitalization for venous thromboembolism (VTE) in a Medicare population. As peripherally inserted central catheters (PICCs) are both associated with VTE and often used for RBC transfusion, we assessed the prevalence of VTE in patients with PICCs.

Methods: We used data from the Michigan Hospital Medicine Safety Consortium to conduct a prospective study of 10,615 patients in 47 hospitals.  Patients who had peripherally inserted central catheters (PICC) placed during hospitalization were enrolled and observed until the PICC was removed or censored at 70 days post-insertion. A multilevel mixed-effects logistic regression model was used (patients nested within hospitals) to determine the association between RBC transfusion and VTE among patients with PICCs.

Results: During the follow-up period, 493 cases of VTE occurred (4.6%).  VTE developed in 6.2% of patients who received a RBC transfusion vs. 4.4% of those who did not (p=0.001) (Table 1).  There was an 18% increase in the unadjusted odds of VTE with each additional unit of RBCs administered (p<0.001) and an 11% increase when adjusted for age, gender, hemoglobin on admission, INR, creatinine, anticoagulants, erythropoiesis stimulating agents, statins, aspirin, history of VTE, cancer, surgery, infection and body mass index (p=0.010).  When restricted to only those patients who received a RBC transfusion, there was a 27% increase in the odds of VTE with each RBC unit received (95% CI: 1.06, 1.52) after adjustment for the above factors.

In 66% of patients, the RBC transfusion was given for anemia (without other indications); 20% received a transfusion for bleeding, 1% for hemolysis, and 13% for both anemia and bleeding.

Of the patients with VTE, 93.5% had RBC transfusion(s), cancer, recent surgery, infection (at any site), history of VTE, and/or were obese.  The sum of risk factors was strongly associated with developing VTE (Table 2).  Internal validation via bootstrapping (1000 replications) was conducted and confirmed the results.  Patients with PICCs who developed VTE were more likely to die compared to those that did not experience this event (16.4% vs. 11.1% respectively, p<0.001).

Conclusions: Among hospitalized patients with PICCs, RBC transfusions are associated with increased risk of VTE.  Careful use of blood products and consideration of alternatives, when possible, appears necessary in these patients. 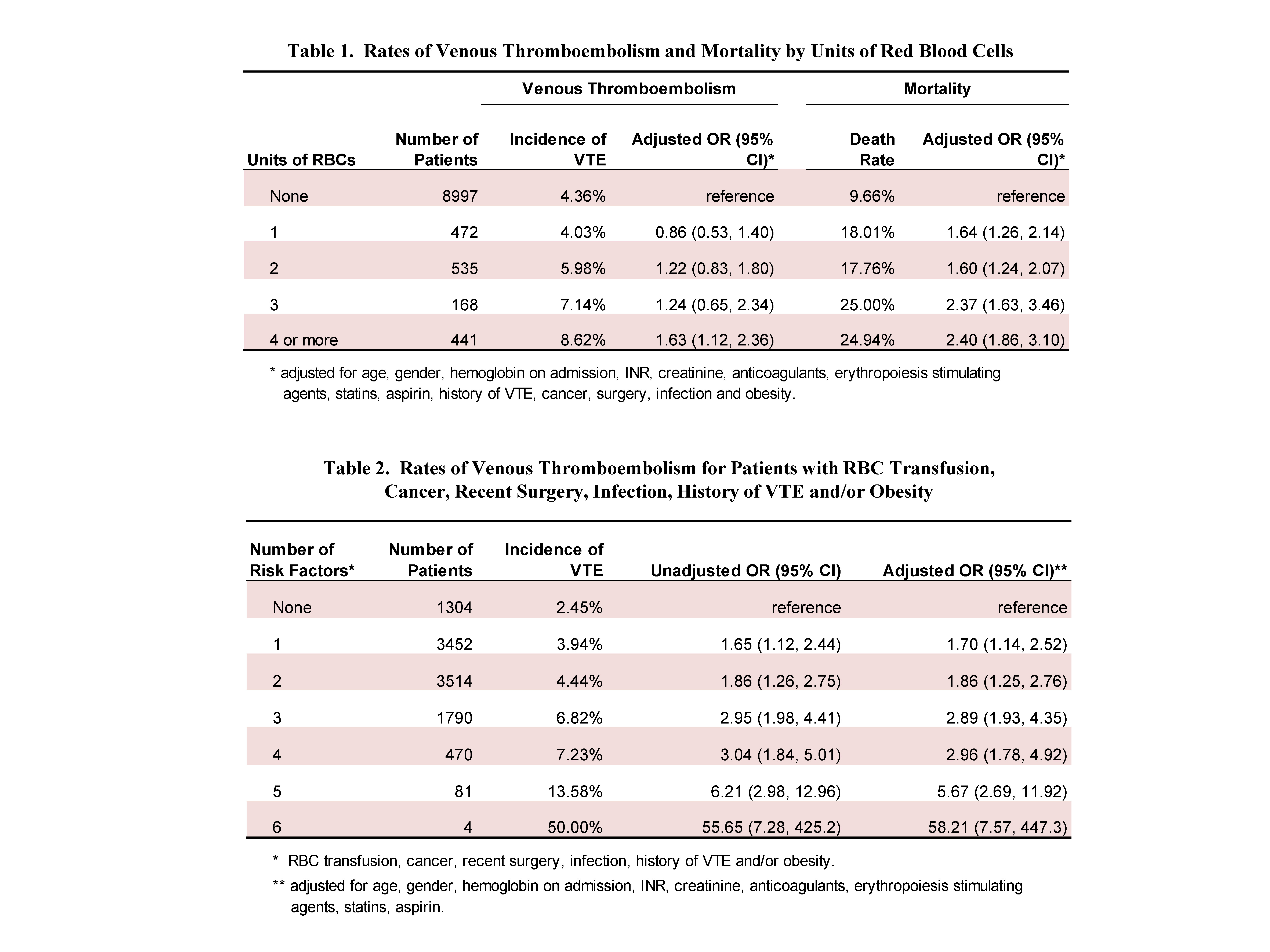 The Influence of Red Blood Cell Transfusion on Venous Thromboembolism in Patients with Peripherally-Inserted Central Catheters.