The Mass Assumption: A Case of Bilateral Breast Masses

A 37-year old G2P2002 female with recent vaginal delivery one month prior, presented with progressively worsening intermittent head, neck and back pain localized to the right side for the past two months.  She reported tongue deviation and slurred speech. After the delivery, she began breastfeeding and noticed a lump on her right breast which she thought was a plugged milk duct. She had 30-pound weight loss in a month. She denied fever, chills, or any evidence of bleeding. The laboratory tests were significant for hemoglobin of 10.7 g/dL and calcium level of 13 mg/dL.  CT Angiography of the Head was performed to rule out stroke, finding innumerable bony lesions in the skull, spine and clavicle raising suspicion of metastatic cancer. Further CT imaging of the abdomen and pelvis found diffuse osseous metastases as well as bilateral breast masses.  Primary breast cancer was suspected.  Interestingly, biopsies of a costal bone lesion and breast mass revealed plasma cell myeloma.  Further serologic testing was performed and was consistent with multiple myeloma.

Breast cancer is the most common malignancy found in women outside of skin cancer. It accounts for 29% on new cancers each year with a mean age at diagnosis is 61-year old. Incidence rates are highest between the ages of 55-64 but the first dramatic increase is seen in the 35-44 age group. While generally viewed as a protective factor, studies have shown a transient increased risk of breast cancer following a full term pregnancy. Lytic bone lesions with elevated calcium levels are commonly found in this cancer which led to our initial suspicion of breast cancer after we discovered bilateral breast masses.

Multiple myeloma is a relatively rare disease accounting for just 1.6% of all new cancer cases in the U.S. with an estimated 26,850 cases in 2015. The median age at diagnosis is 69-year old with only 3.1% of the total number of cases occurring between the ages of 35-44. Breast plasmacytomas are very rare, occurring in less than 2% of multiple myeloma patients. Our patient met diagnostic criteria for multiple myeloma with the findings of positive serum markers and a clonal plasma cells in the bone marrow biopsy along with the presence of an elevated calcium level and lytic bone lesions. The primary presenting features of multiple myeloma in patients under the age of 40 are bone pain, fatigue and extramedullary plasmacytomas which correlate well with this patient.

This is a rare and interesting case of multiple myeloma in a breast feeding young woman with bilateral breast plasmacytomas. When bone metastases are present, breast cancer is a major concern in the setting of breast masses.  However this case clearly demonstratesd that it is not the only possible diagnosis. While extremely uncommon in younger patients, multiple myeloma should be considered as one of the differential diagnoses when presented with lytic bone lesions. 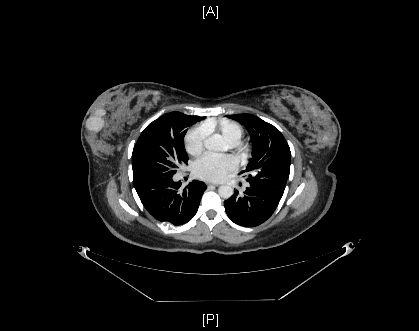 The Mass Assumption: A Case of Bilateral Breast Masses.