Thinking Outside the Box

A functionally independent 74‐year‐old female, resident of New England, presented with altered mental stalus for 2‐3 weeks. She had a history of diabetes and poorly controlled hypertension (HTN). One month ago she had been evaluated for myalgias, fatigue, and weight loss anc elevated ESR. Polymyalgia rheumabca (PMR) was suspected, and steroids were started. Her symptoms failed to improve, and a week later she presented with headaches and complete bilateral loss of vision lasting 30 minutes. Neurological examination was unremarkable. MRI findings were consislenl with posterior reversible encephalopathy syndrome (PRES), presumed to be a result of HTN (Fig. 1). Steroids were discontinued and antihypertensive medications increased. However she had persistent headaches and progressive decline in cognition over the next 3 weeks and was transferred to our facility There was no fever, jaw claudication, or recurrence of visual symptoms. Her vital signs were normal, neurological exam remained nonfocal, and there were no meningeal signs. Intravenous steroids were started for possible giant‐cell arteritis (GCA), and a temporal artery biopsy was scheduled. However, further diagnostic testing was continued. Although there was no reported tick bite or erythema migrans rash, serum Lyme tilers were positive for both IgG and IgM. CSF exam revealed 229 WBC (95% lymphocytes), normal glucose, elevated protein, and positive Lyme titers. A diagnosis of Lyme neuroborreliosis (LNB) was confirmed, and treatment with ceftriaxone started. Improvement in mental status was observed, with no residual neurological sequelae by the end of 4 weeks of treatment. 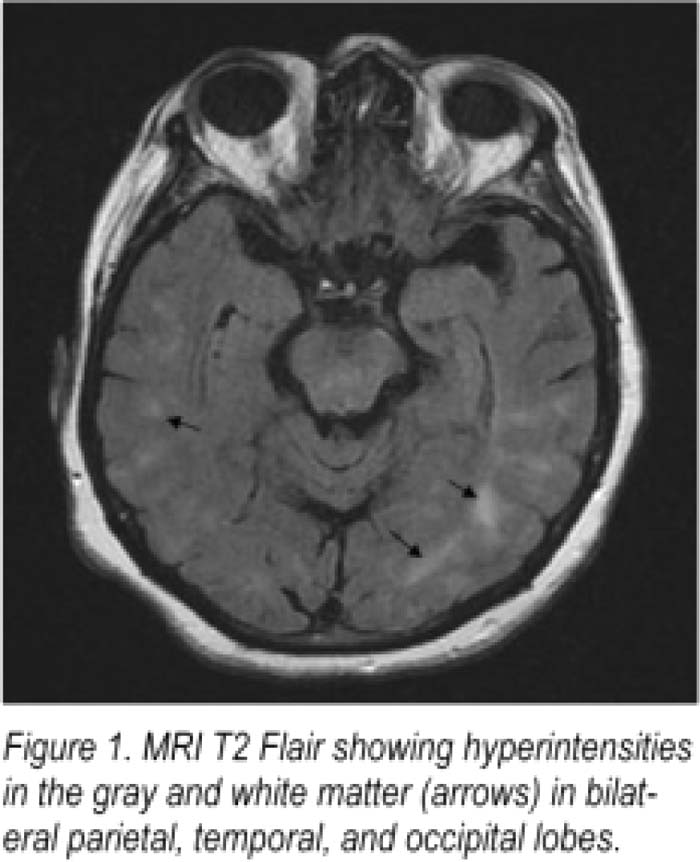 At the onset, there were many clues pointing toward GCA: age > 50, headaches, elevated ESR, visual loss, and association of PMR with GCA. However, neuroimaging with diffuse, patchy, hyperintensities in gray and white matter, as seen in this patient, is not typically seen in GCA. PRES is a neurotoxic state due to vasogenic edema and has a fairly unique radiological pattern. It occurs predominantly because of malignant HTN. However, it is important to realize that a variety of other conditions can lead to this syndrome including uremia, vasculitis, sepsis, autoimmune disorders, and immunosuppressive medications like cyclosporine. LNB ranges from mild conlusion To severe encephalopathy; hence, overlaps with multiple diseases and difficulty in diagnosing solely on clinical presentation. Increasing incidence has led to a surge in diagnostic testing and treatment. Underlying neuropathology of LNB remains unclear. Proposed mechanisms include vasculitis, autoimmune reaction, cytotoxicity, and neurotoxins. There are case reports of ischemic strokes caused by LNB because of vasculitis. Vasogenic edema resulting from vasculopathy can account for the clinical and radiographic presentation of PRES.

This case represents a rare clinical presentation of PRES in the setting of confirmed LNB, with complete resolution on treatment of the underlying pathology.

Thinking Outside the Box.