Case Presentation: A 61-year-old man with no notable health history was admitted to the hospital for a month-long history of dysphagia and weight loss. The patient had been in his usual state of health until around six months ago when occasional back pain developed, which he attributed to his prolonged truck-driving. Four months prior to presentation, his noted daily headache accompanied by epistaxis. In the past month, he developed dysphagia and a 20-lb weight loss. An outside hospital MRI revealed a 7.4cm nasopharyngeal mass extending into the cranium. He was then referred to us for further stabilization and management.At this hospital, the mass was biopsied and found to be EBV-negative squamous cell carcinoma. During this time, expedited imaging also disclosed a 5x4cm right lung nodule and a T12 fracture with concern for cord compression.The patient at the time had been neurologically intact and spine-related pain-free, and neurosurgery, orthopedics, and interventional radiology (hereafter IR) were consulted. A decision was made to biopsy the spinal lesion prior to surgical intervention, which revealed high-grade plasma cell neoplasm. Expedited radiotherapy was started given the radiosensitive nature of such, and surgical stabilization was performed.Subsequent lung lymph node biopsy showed adenocarcinoma, and further questioning of the patient’s history revealed three-decade-long close contact with chemicals including benzenes prior to truck-driving. Given his overall poor functional status and prognosis, the patient decided to transition to hospice care. He passed away four months later.

Discussion: This case of a 61-year-old patient with three primary malignancies complicated by cord compression presented us with at least two major challenges in his hospital care. First, we had to recognize the presence of three primary malignancies. When reaching the diagnosis of nasopharyngeal carcinoma given his presenting symptoms, it would be tempting to attribute his spinal lesion to a distant metastasis, as nasopharyngeal carcinoma tends to metastasize early, especially to bones (75% of distant metastasis) [1,2]. Even taking one step back with his lung nodule, one would suspect the lesion to be lung malignancy-related, which would otherwise be radio-resistant. Occupational exposure to hazardous chemicals is a known risk factor for multiple malignancies, including plasmacytoma as in this case, which highlights the importance of detailed social history taking [3].In addition, for patients presenting with neoplastic cord compression, careful consideration of spinal stability and the source of malignancies needs to be made to determine the optimal management. In the case of our patient, an early consultation to IR and a multi-disciplinary discussion expedited his biopsy which disclosed management-changing information.

Conclusions: In summary, this abstract reports an uncommon “Hickam’s dictum” presentation of three concomitant malignancies, which also underscores the importance of obtaining detailed social history on admission in patients with exposure-related malignancies. In addition, for hospitalized patients with neoplastic cord compression, a careful consideration of urgency/spinal stability and the suspected source of malignancies needs to be made. An expedited biopsy/IR consultation prior to surgical intervention can be management-changing.

IMAGE 2: PET scan of the patient’s lung and nasopharyngeal lesions 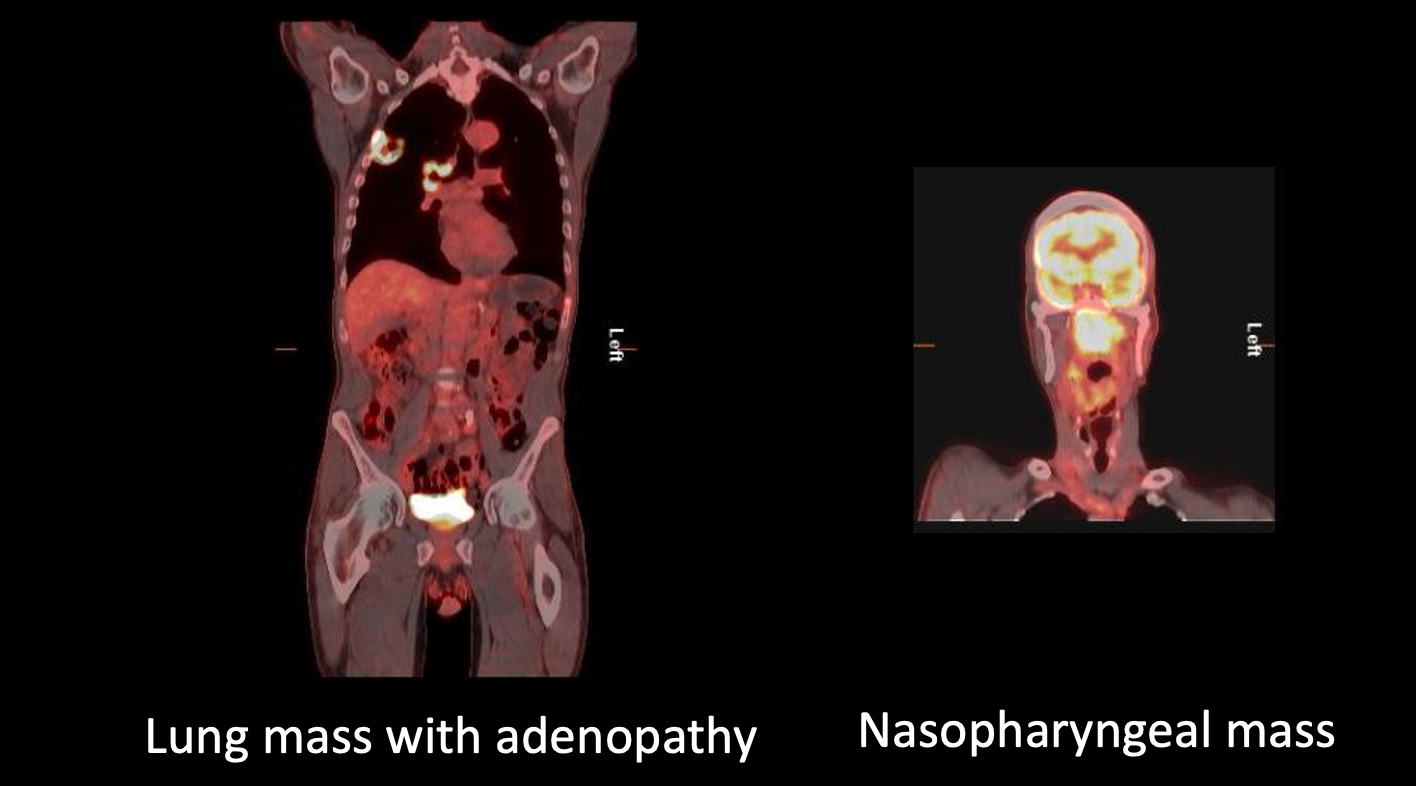