Background: As chronic illnesses are claiming majority of deaths in United States, it is very important that we identify patients with chronic illnesses who have shortened life expectancy and prioritize their needs for palliative care. The different death trajectories of chronic illnesses make it difficult to prognosticate such patients. Available prognostication tools, both disease specific and non disease specific, are cumbersome, time consuming and require some training. Therefore, we need a convenient and valid tool which can be easily applied by different providers. Surprise question,” would I be surprised if this patient died in next 6 months?” is an intuitive question, integrating co-morbidity, social and other factors and helps to frame prognosis in a broader perspective.

From June 2014 to September 2014, a cohort of 314 patients was recruited from a community hospital of a University medical center. Patients with any of the following criterias were included: age more than 70, admission from nursing home, diagnosis of any of the chronic conditions – congestive heart failure, chronic lung disease, dementia, cerebrovascular accident/chronic neurological condition, peripheral vascular disease, chronic liver disease. We recorded answer of Surprise question from different providers- nurses, residents in training, physician assistants and attending physicians. Patients were followed for their status at 6 month- alive or not.

Results: We obtained total of 1125 answers, 627 not surprised, 498 surprised. More than 70% of patients had discordant answers/no agreement. The sensitivity for the entire group was 77.55% (64.4-86.8) and specificity was 57.75% (CI 51.7-63.5). The odds of a patient dying in 6 months is 4.72 times higher in “no” group than in the “yes” group, (CI 3.06-7.27, p<0.0001). The Kaplan Meier curve showed that both groups separated right away and continued to separate further during follow up. We further obtained sensitivity, specificity, predictive values and odds ratio for the different groups. To our surprise, residents had the highest sensitivity, positive predictive value and odds ratio.

Conclusions: The surprise question is effective in identifying chronically ill hospitalized patients who have the highest risk of early mortality. Therefore we suggest that, answering “no, I would not be surprised if my patient died in next 6 months?” should trigger a re-assessment of the patient’s current state and immediate future. The residents in training should be encouraged to utilize this inexpensive tool. 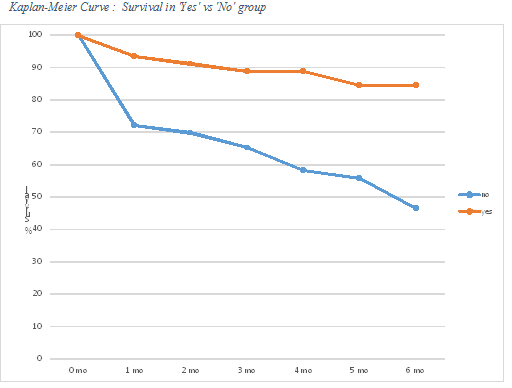