This case is of a 92‐year‐old man who was admitted to the hospital following a syncopal episode. He was apparently found lying down for 1‐5 minutes and was nol able to recall anything on waking up. Emergency medical response team gave him a rapid 250‐cc bolus of normal saline en route to the hospital for a BP of 90/60. On arrival to the hospital, CT head was done, which showed multiple foci of intracranial and extracranial air. CT chest showed air in the jugular system, and 2‐D Echo showed a large air bubble filling up 75% of the volume of the right atrium His EKG showed rate controlled atrial fibrillation. The patient was managed conservatively under close observation in the ICU. He received supplemental oxygen. The patient's mental status was stable and did not change. He did have underlying dementia. The air emboli resolved on subsequent CT and Echo, his vital signs were stable, and he was discharged to an assisted living facility.

The clinical features of venous air embolism can range from no symptoms to death. An air bubble can cause an air lock which can lead to obstruction of right ventricular outflow trad, decreased venous return, and decrease cardiac output. The morbidity and mortality in venous air embolism depends on the total amount of air inserted, location and speed of air entry, body position, and general clinical stale of the patient. 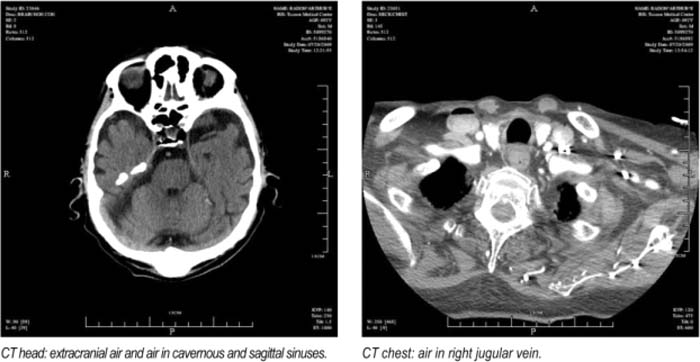 The case presented is of a prehospital incident that had a good outcome, although it had the potential for devastating and fatal complications. It is important to realize that venous air embolism may occur more often than is realized, and it can even be a result of a peripheral cannula. Steps to avoid inadvertent infusion of air include: (1) occlude the cannula hub before connecling to IV solution; (2) avoid accidental disconnection of the catheter; and (3) do not run the fluid under pressure unless absolutely necessary.

A. Trujillo, none; G. Panduranga, none.