WHAT IS THAT BEHIND THE LIVER? A CASE OF HHV-8 NEGATIVE MULTICENTRIC CASTLEMAN’S DISEASE

Case Presentation: A 37-year-old Asian-American woman with a past medical history significant for PCOS, HPV, HSV- 1, iron malabsorption/deficiency, and vitamin B12 deficiency-related anemia presented to the ED with body aches, fever, fatigue, cough, and recurrent URI for the past 3 months. Following treatment, she presented two weeks later to the hematology clinic for scheduled visit for her anemia and noted increasing joint pain. She had increasing fatigue but denied lymphadenopathy, fevers, chills, or night sweats. Her CRP, ESR, with +ANA were elevated which warranted a CT scan. The scan showed a 65.7 mm portal hepatis mass on the posterior of the left portal vein, posterior to the right and common hepatic arteries, and the associated retro portal lymph nodes. The tumor markers CEA and CA 19-9 were normal. The biopsy was inconclusive but suggested a lymphoproliferative disorder, a ganglioneuroma, or a schwannoma. Infectious etiologies were ruled out due to negative blood and urine labs. Surgery was performed without complications. The hepatic artery lymph node, the lymph node at the right crus diaphragm, and the retro portal lymph node and tumor were excised; all of which were HHV-8 negative. Microscopy studies showed lymph nodes with florid follicular hyperplasia and progressive transformation of germinal centers. Rare atretic follicles as well as follicles with multiple germinal centers are also observed. The interfollicular areas showed increased plasma cells without atypia and several foci of vascular proliferation. These findings were used to diagnose MCD. Following surgery, hemoglobin and ESR normalized and she continues to be monitored with repeat CT every 6 months to track remission. She continues to recover well.

Discussion: Here we present a case of idiopathic, HHV-8 negative MCD originating from a complicated retro-hepatic tumor. Increased levels of IL-6 is commonly involved with the mechanisms of the disease. Our patient has several predisposing factors including anemia of chronic disease and PCOS which increase suspicion for MCD. PCOS causes severe hormonal imbalances and can cause inflammation including increased levels of IL-6. As increased levels of IL-6 is frequently seen in Castleman Disease, a natural hypothesize is that PCOS could be a risk factor for MCD. Anemia of chronic disease is characterized by increased inflammatory biomarkers such as hepcidin and IL-6 which would increase risk of developing MCD.Following surgery, the hemoglobin and ESR normalized. A mechanism for this improvement could be through decreased hepcidin levels following tumor resection. Chronically elevated levels of IL-6 increase hepcidin expression by the liver. Hepcidin blocks intestinal absorption of iron and macrophage iron recycling through hepcidin-ferroportin receptor signaling. The removal of the MCD tumors releases this inhibition on iron homeostasis which restored plasma iron levels without supplementation. Surgery is not considered curative in this case as not all the involved lymph nodes can be removed. If symptoms return, medical management with siltuximab or subsequent surgery will be considered.

Conclusions: We present a case of non-HHV 8 associated MCD which was treated with surgical resection of a retro hepatic tumor. Following surgery, our patient’s elevated ESR and chronic anemia resolved. Because multiple regions of lymph nodes were involved, surgery was not considered curative. The patient will be monitored for relapse which will be managed with immunosuppressive therapy or repeat surgery.

IMAGE 1: Abdominal CT showing a porta hepatis mass on the posterior of the left portal vein, posterior to the right and common hepatic arteries, and the associated retro portal lymph nodes. 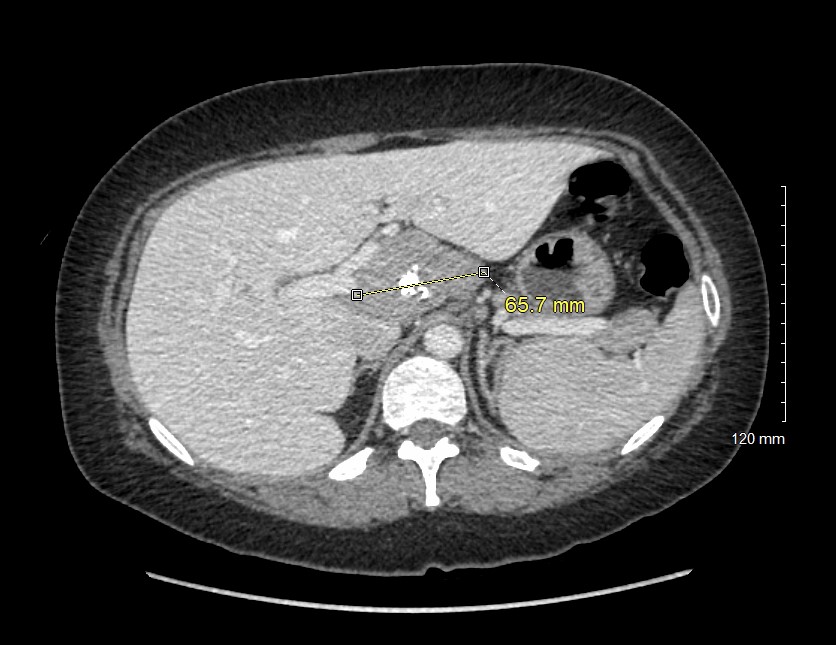 WHAT IS THAT BEHIND THE LIVER? A CASE OF HHV-8 NEGATIVE MULTICENTRIC CASTLEMAN’S DISEASE.