What Is the Cause of This?

A 39‐year‐old African American male newly diagnosed with AIDS (CD4 75 cells/mm3), viral load 336,000 copies/mL) presented with three months of bloody diarrhea. Each bowel movement was preceded by intense, cramping abdominal pain. The stools were watery, streaked with frank blood and occurred four to twelve times per day. He endorsed fecal urgency and incontinence as well as a 30‐pound weight loss.

He reported intermittent condom use with a known HIV positive female partner, and denied multiple or male partners. Family history was negative for gastrointestinal disease or malignancy. He appeared thin on exam. No abdominal tenderness was elicited; no organomegaly was palpated. His laboratory studies demonstrated a mild anemia.

Computed tomography of the abdomen and pelvis revealed circumferential thickening of the rectum; colonoscopy demonstrated ulcers from the proximal transverse colon to the rectum.

Intestinal biopsy revealed diffuse colitis throughout the colon and rectum and spirochetes in the right colon.

He was diagnosed with intestinal spirochetosis (IS) and treated with metronidazole. On follow up, diarrhea and weight loss had resolved.

Intestinal spirochetosis (IS) is caused by the bacterial genus Brachyspira,. Presentation can range from asymptomatic colonization to chronic diarrhea, abdominal pain, fever, weight loss and even death.

IS is more common in developing countries; however, prevalence appears to be growing in the Western world with the highest rates in homosexual men and HIV positive individuals. There seems to be no correlation between degree of immunodeficiency and extent of disease in those with concurrent HIV and IS.

The diagnosis of IS is based on the histologic finding referred to as the “false brush border,” a diffuse blue fringe along the border of the intestinal epithelial cells, seen best on H/E staining. It is hypothesized that diarrhea results from microvilli damage decreasing the absorptive surface. Colonoscopic findings range from little to no mucosal changes to significant inflammation and ulceration. New methods of identifying IS, including PCR and immunomagnetic separation, are being explored but not commercially available.

Metronidazole is most commonly used for therapy, and remission has also been seen with penicillin, clindamycin and macrolides.

IS is a rare but increasingly common and potentially deadly infection that appears to be treatable with easily accessible antibiotics if diagnosed. For this reason, internists should consider IS in the differential for diarrhea, especially in HIV positive patients. 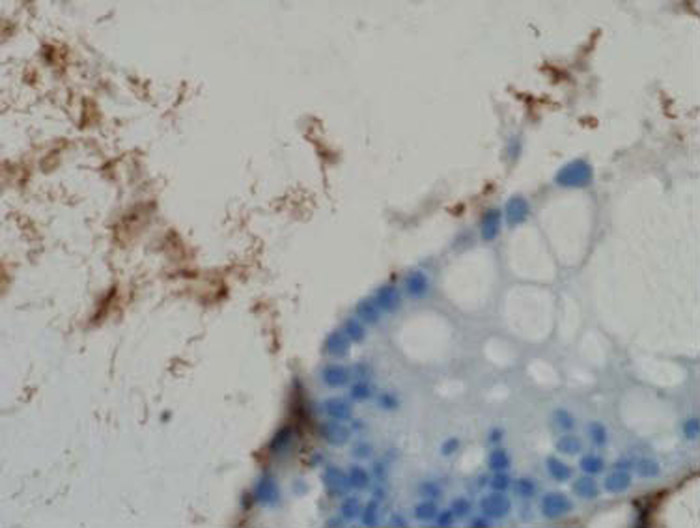 What Is the Cause of This?.