Case Presentation: A 60-year-old man with a history of alcoholic cirrhosis and autoimmune cholangitis on azathioprine and prednisone (10 mg daily) presented to the emergency room for shortness of breath, productive cough, and chest pain for two weeks. Recent surveillance EGD had showed diffuse esophageal candidiasis and the patient had been started on daily fluconazole. The chest pain was described as pressure worsened by swallowing. On presentation, he was hypoxic on minimal exertion. He had wheezing in bilateral lung fields and multiple, chronic appearing, indurated, dark maculopapular rash on arms and thighs. Admission labs were remarkable for WBC of 12,900/microliter and Beta-D-glucan >500 pg/ml. EKG was unremarkable. Computed tomography (CT) scan of chest showed scattered cavitary nodules and consolidation in bilateral lungs (Image1). The patient was started on piperacillin-tazobactam for bacterial pneumonia. Fluconazole was continued with concerns for disseminated Candidiasis. The sputum and Bronchoalveolar lavage (BAL) fluid culture showed oral flora only. Fungal serologies for Aspergillus, Cryptococcus, Histoplasma, Blastomyces and Coccidiodes were negative. M. tuberculosis PCR on sputum and BAL fluid was negative. Blood cultures were negative. There was no vegetation on Echocardiogram. Skin biopsy showed non-specific dermal fibrosis. Autoimmune and vasculitis workup were negative. The patient’s symptoms improved and follow-up CT chest on day 13 showed a significant decrease in size of consolidations and cavitation (Image 2). He was discharged on Amoxicillin- clavulanic acid (Augmentin) with a plan for follow-up CT chest in six weeks. Post discharge, AFB culture detected Nocardia abscessus. Trimethoprim-sulfamethoxazole (Bactrim) was added to Augmentin. MRI brain with IV contrast was negative for any intracranial lesions. Later patient developed hyperkalemia and acute kidney injury with Bactrim and antibiotics were changed to Augmentin and Tedizolid. Patient is being closely followed in Infectious Disease Clinic.

Discussion: The annual incidence of Nocardia infection is estimated to be about 500 to 1000 cases in the United States. In most cases, infected individuals have risk factors such as diabetes, cancer, immunosuppressant use, and alcoholism. Lungs are the most common site of Nocardiosis even though Nocardia can spread to the brain. Skin infections can present as skin ulcerations or nodules and can raise suspicion for invasive fungal infection. As in our case, the detection of Nocardia species can take more than a few weeks and many patients end up receiving empirical broad-spectrum antibiotics. Bronchial lavage may be necessary but may not detect Nocardia if the patient has received antibiotics for several days. It is critical to have a high index of suspicion for this organism when a patient has risk factors and cavitary lung lesions. Antibiotic resistance patterns are also different among different Nocardia species, hence, empiric combination therapy including Bactrim is recommended for most patients with severe or disseminated disease.

Conclusions: Nocardiosis is a diagnostic challenge but should be considered in the setting of cavitary lung lesions. Risk factors and associated skin lesions can be clues for early diagnostic tests. Since Nocardia species can have varied susceptibility to different antibiotics, follow-up CT scans can be helpful to assess the response to the treatment. 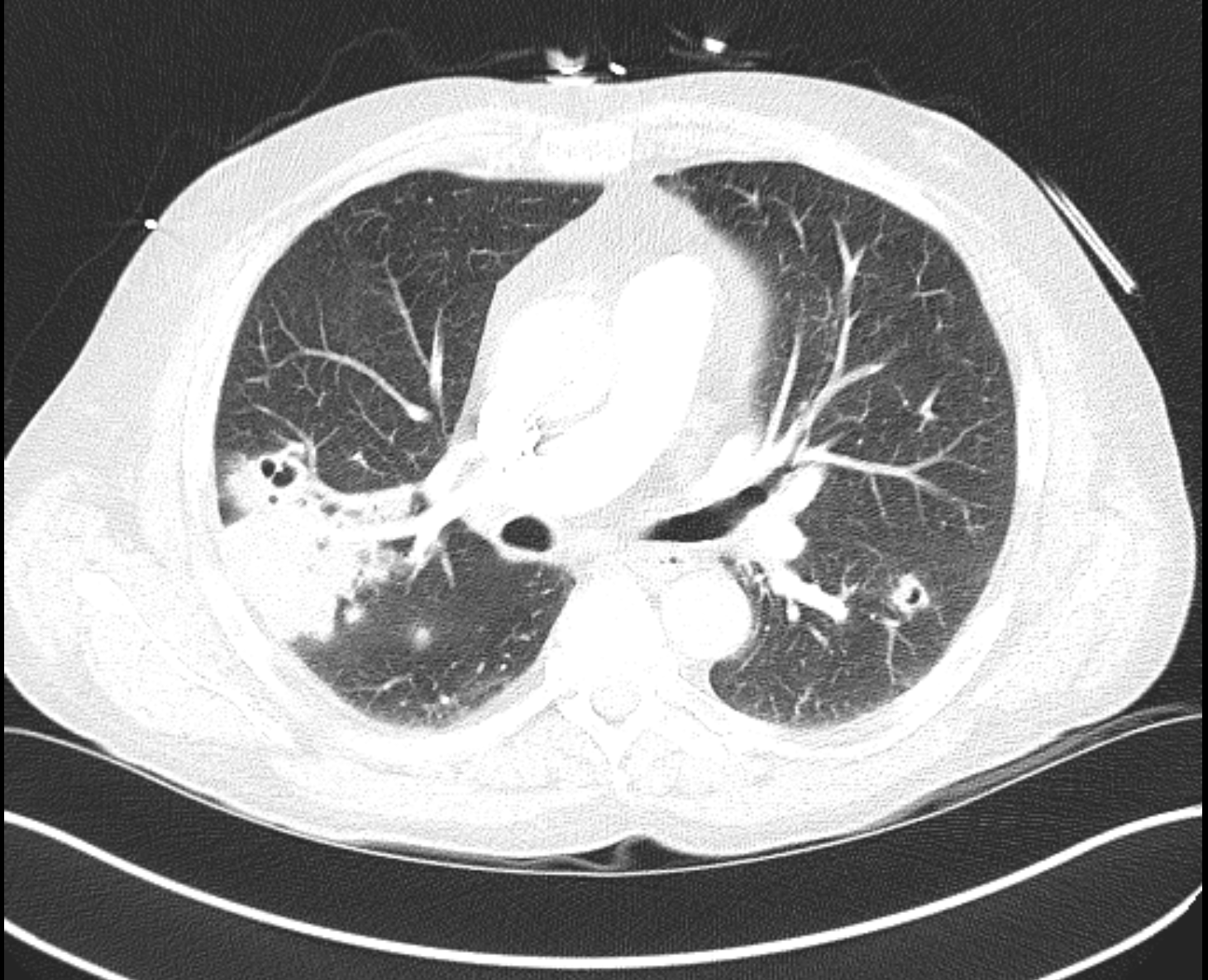 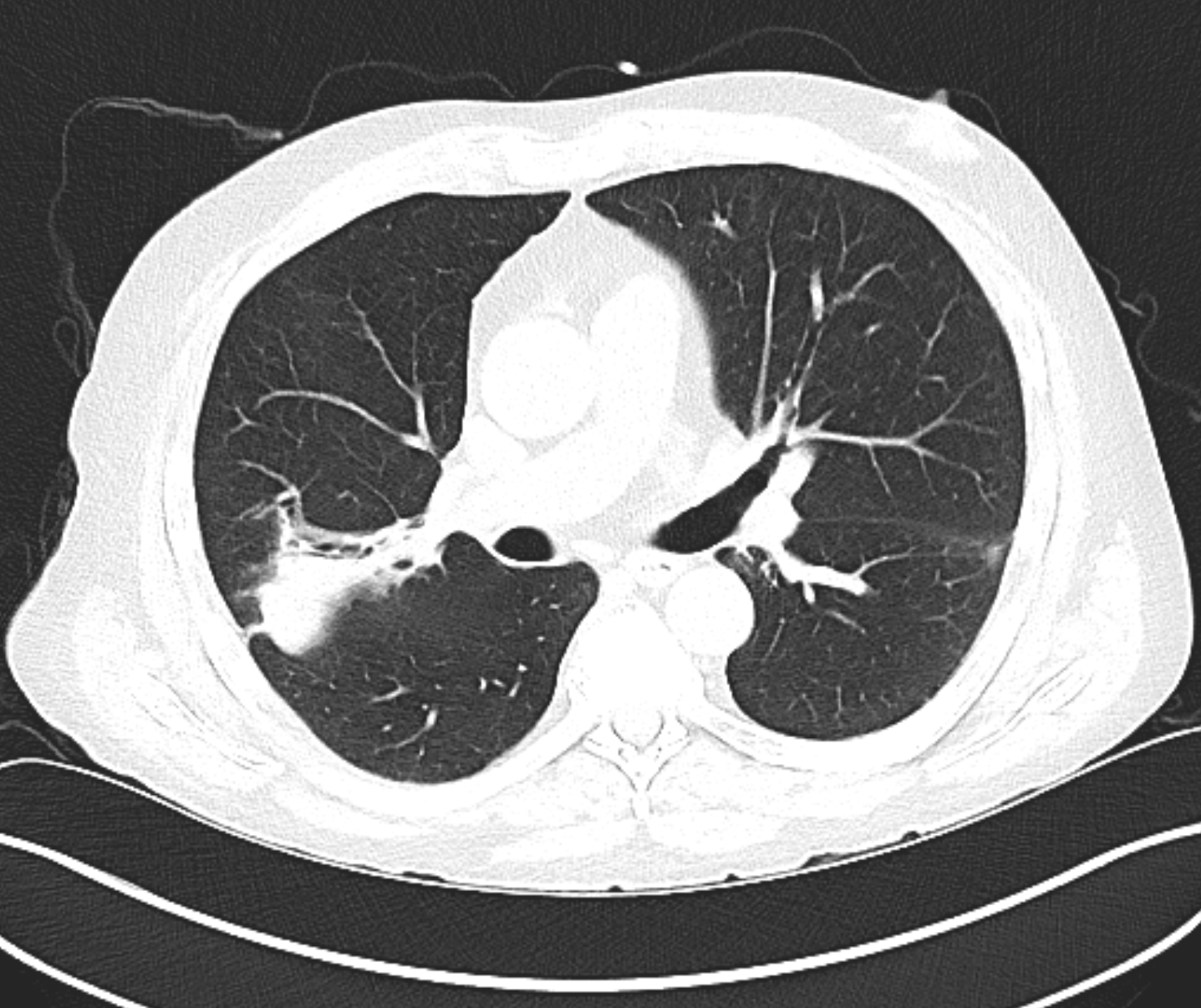