A CASE OF PARADOXICAL HYPONATREMIA IN UNDIAGNOSED CENTRAL DIABETES INSIPIDUS

Case Presentation: A 70-year-old woman visiting from India with history of hypothyroidism and adrenal insufficiency presented with four days of profuse diarrhea and fever. She was admitted for sepsis secondary to Rotavirus gastroenteritis with initial sodium level 132 (135-145 mmol/L). On day 2 of hospitalization, sepsis resolved with isotonic fluids and stress dose steroids, but she was found to have acute increase in sodium from 134 to 159 mmol/L. Hypotonic fluids were initiated but without expected normalization of the sodium level. Additional lab work showed high serum osmolality 332 (275-295 mOsmo/kg), low urine specific gravity 1.004 (1.005-1.040), and low urine osmolality 105 (50-1200 mOsmo/kg). Upon further questioning, the patient admitted to long term polyuria and polydipsia leading to a suspicion for undiagnosed diabetes insipidus. She received one dose of oral Desmopressin 0.1 mg on day 3 with correction of sodium level to 143 mmol/L on day 4, supporting the diagnosis of central diabetes insipidus. Pituitary hormone levels showed low-normal level of ACTH 9 (5-46 pg/mL) and low levels of TSH 0.10 (0.27-4.20 uIU/mL), LH <0.1 IU/L, FSH 0.3 IU/L, prolactin 1.0 (3.4-24.1 ng/mL), and IGF-1 19 (38-163 ng/mL). MRI Head revealed a 1.1 x 1.2 x 0.9 cm pituitary lesion in the sella that extends into the infundibulum suspicious for cystic pituitary adenoma vs. pars intermedia cyst. The patient was discharged on maintenance doses of Hydrocortisone, Levothyroxine and Desmopressin.

Discussion: Sodium abnormality is a common problem encountered in the hospital setting. Either hypernatremia or hyponatremia is associated with an increased risk of morbidity and mortality. Normally, the hypothalamic osmoreceptor senses increased serum osmolality, which then stimulates the neurons to secrete vasopressin. However, in diabetes insipidus, vasopressin is either inadequately produced or sensed, thus resulting in decreased reabsorption of water from the kidneys and causing hypernatremia. Hyponatremia is typically not expected. This patient presented with hyponatremia, likely due to profound diarrhea resulting in intravascular volume and solute depletion, as well as adrenal crisis. She received proper treatment with isotonic fluids and stress dose steroids, but in turn developed hypernatremia that did not improve after correcting the free water deficit appropriately. This raised suspicion for diabetes insipidus and was confirmed with the desmopressin challenge. More hormonal evaluation was ordered due to patient’s history of hypothyroidism and adrenal insufficiency, which raised suspicion about pituitary gland involvement. This was confirmed by MRI which showed macroadenoma or cyst causing panhypopituitarism and diabetes insipidus.

Conclusions: Hyponatremia is not commonly seen in patients with diabetes insipidus. However, it can occur if a patient presents with profound gastrointestinal losses or in adrenal crisis. Suspicion for diabetes insipidus should be raised when sodium level remains high despite free water replacement. 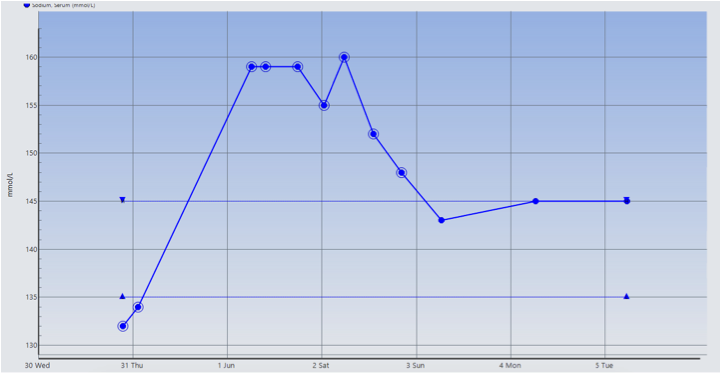 A CASE OF PARADOXICAL HYPONATREMIA IN UNDIAGNOSED CENTRAL DIABETES INSIPIDUS.