A CASE OF VAPING-ASSOCIATED SPONTANEOUS PNEUMOTHORAX

Case Presentation: A 20-year-old male with no known medical conditions presented to the emergency department with acute right-sided chest pain and shortness of breath, which began abruptly while he was playing video games at home.  He described the pain as sharp, radiating to the back, 7/10 in severity, and worse with coughing and inspiration. He denied fever, chills, palpitations, or any other associated symptoms. He also denied any family history of lung or connective tissue diseases. He had no prior injuries to the chest, punctures, fractures, and did not use home medications or supplements. He had been smoking nicotine vape products for over 6 years and endorsed doing so just before his symptoms began. A new device, Smok Novo, had been purchased 2 weeks prior to admission. The patient reported feeling an increased burning sensation in his throat, which he attributed to “nicotine getting into my system faster.” Prior to this, he reported using Puff plus, puff bar, Juul, Hype bar and many different flavors. All vape products were purchased locally. On presentation, he was afebrile, tachycardic to 129 BPM, tachypneic to 37 breaths per minute, and hypoxic at 74% on room air.  He had a height of approximately 5 feet 10 inches and weight of 64 kilograms. He was immediately placed on a partial rebreather with improvement in his hypoxia. On physical exam, he had diminished lung sounds on the right. Complete blood count and basic metabolic panel were unremarkable.  A COVID-19 nasopharyngeal PCR test was negative.  He had absent lung sliding on a visualized lung bedside point-of-care ultrasound. A chest X-ray (CXR) revealed a large right pneumothorax with minimal shifting of the mediastinum to the left (Figure 1).  The left lung was clear without effusion or abnormality.  A chest tube was placed without complication, and the patient reported an immediate improvement in his chest pain and dyspnea.  He has transitioned to 2 liters nasal cannula. Throughout his hospital course, the patient’s chest tube was found to have recurrent air leaks, and surveillance CXRs showed intermittent reaccumulation of air in the right chest.  He remained asymptomatic.  He was saturating at 97% on room air and denied any chest pain or subjective dyspnea.  On hospital day 7, his pneumothorax had resolved (Figure 2).  The chest tube was placed on a water seal, then removed without complication.  The patient was discharged home in stable condition.

Discussion: While tobacco use is an established risk factor for spontaneous pneumothorax, the risk posed by electronic cigarette use (i.e., vaping) is not known.  The prevalence of vaping is increasing, especially among adolescents and young adults, who are at increased risk of pneumothoraxes anyway.  Only five cases of vaping-associated pneumothoraxes have been reported in the literature, but one study of vaping-associated pulmonary injury found that 11 (18%) of the 60 patients studied experienced a pneumothorax or pneumomediastinum.  As we begin to understand the long-term health outcomes associated with vaping, it is increasingly apparent that screening for electronic cigarette use is an important component of a comprehensive medical history.

Conclusions: Here, we present the case of a 20-year-old male with a two-year history of e-cigarette use who presented with acute hypoxic respiratory failure secondary to spontaneous pneumothorax.  He had no underlying lung disease, and his only other risk factors were male gender and asthenic body habitus.  This case highlights e-cigarettes as a potential risk factor for spontaneous pneumothorax. 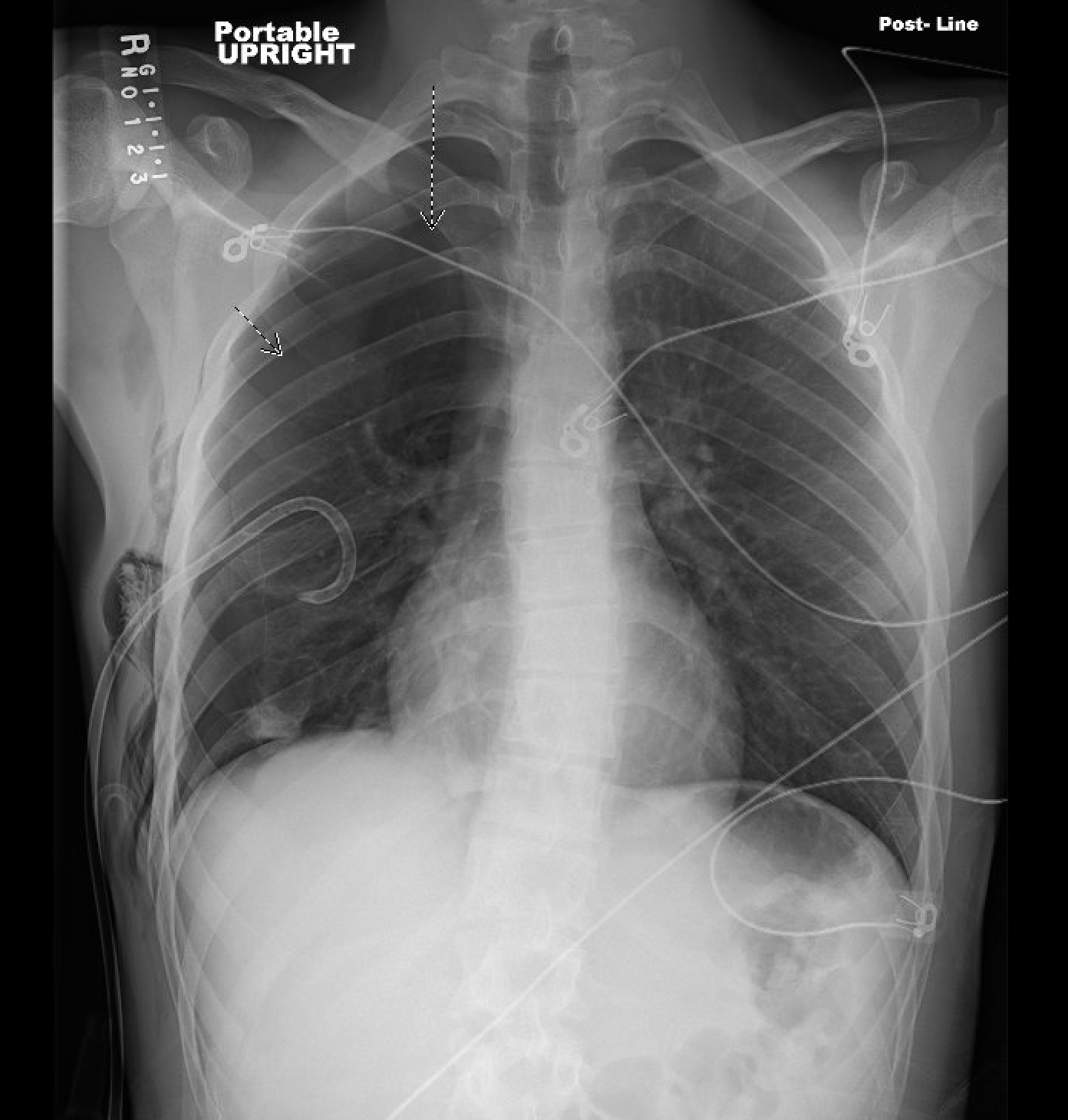 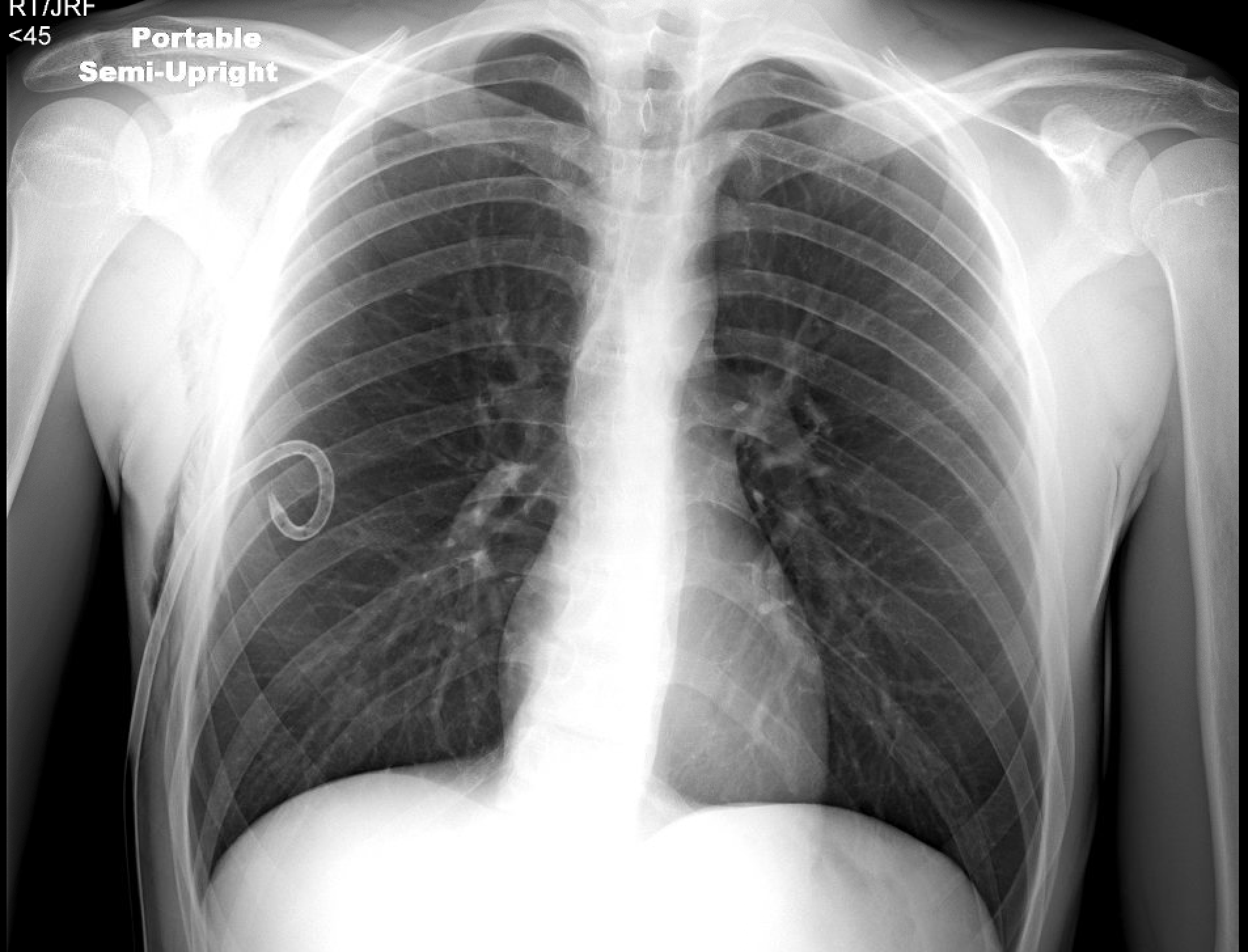 A CASE OF VAPING-ASSOCIATED SPONTANEOUS PNEUMOTHORAX.