Background: BACKGROUNDSepsis has been recognized as a major cause of mortality and morbidity in the United States. If not recognized and managed promptly, it can lead to septic shock which is one of the leading causes of deaths in the hospital (WHO, 2020). To promote early identification and treatment of severe sepsis and septic shock, the Centers for Medicare and Medicaid Services (CMS) developed a management bundle (SEP-1) to measure appropriate and timely care of this disease. Our hospital is an inner-city safety net hospital catering to under served population. We had a severe sepsis bundle compliance rate of 63.6% in May 2020. According to a study in 2019, the mean for sepsis bundle compliance was 48.9% with a standard deviation of 19.4% (Barbash et al., 2019). Though our site was above the national mean, there was still opportunity for improvement.

Purpose: To improve the sepsis bundle compliance rate (SEP-1) to 75% from June to September 2020.

Description: Methods:A multidisciplinary team under the site Sepsis Committee was constituted to brainstorm this issue. Team members identified multiple opportunities for interventions to improve the severe sepsis bundle compliance. Based on the review of prior fallouts, the key focus areas identified were as follows.KEY FOCUS AREAS:1. Early Identification,2. Order set usage and associated deficits,2. Handoff communication.INTERVENTIONS:1. Sepsis Huddles,2. Physician/APC Education, 3. Sepsis screening during shift change.Results: The interventions led to a gradual but sustained increase in Sepsis bundle compliance rate reaching 93.3% in October. During the 5 months under review, Aurora Sinai Medical Center had a total of 66 severe sepsis or septic shock cases that passed the CMS bundle and 8 that fell out. The average sepsis bundle compliance rate of the 5 months was an 87.28%.

Conclusions: Discussion:By implementing a sepsis screening tool that was used during nursing shift changes or changes in a patient’s condition, early identification of severe sepsis was improved. Nurses and providers partnered on the screening tool to check for suspected infection, SIRS criteria, and evidence of organ dysfunction. Next, physician education focused on usage of the severe sepsis treatment order set to standardize care as well as targeting categories of high fallouts (i.e. delay in antibiotic administration, not meeting target fluids, and testing for a repeat lactate if necessary). The root cause of each fallout was identified and communicated to the care team to avoid future fallouts. Finally, sepsis huddles were focused at communicating the importance of sepsis and assessing if severe sepsis treatment would be appropriate for a designated patient. The combination of these interventions resulted in a noticeable improved impact on the severe sepsis bundle compliance rate, , positively impacting patient outcomes at the facility.Conclusions:Focused and collaborative communication from team members, early identification through increased screening, and additional education allowed our facility to achieve strong bundle compliance results. 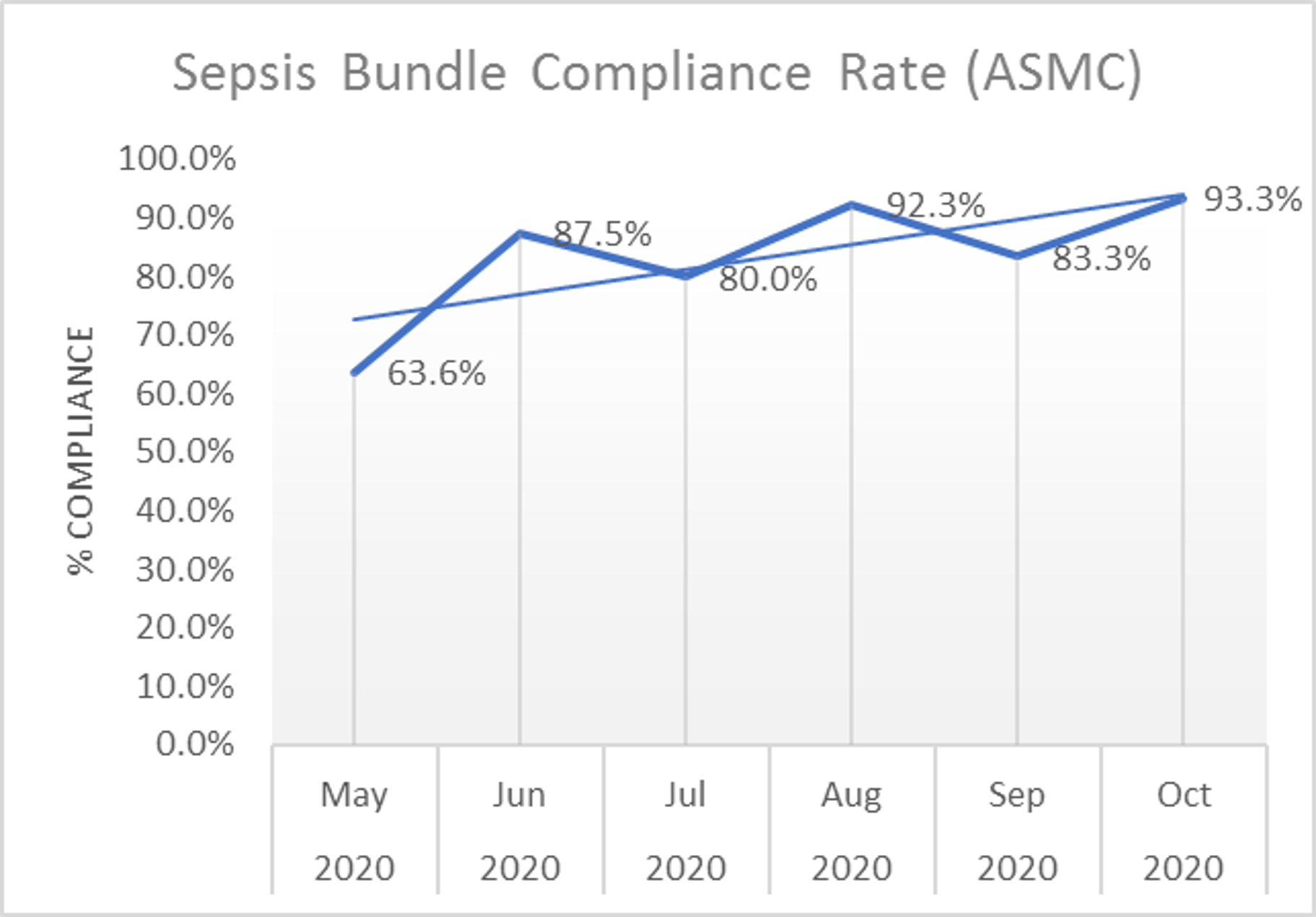 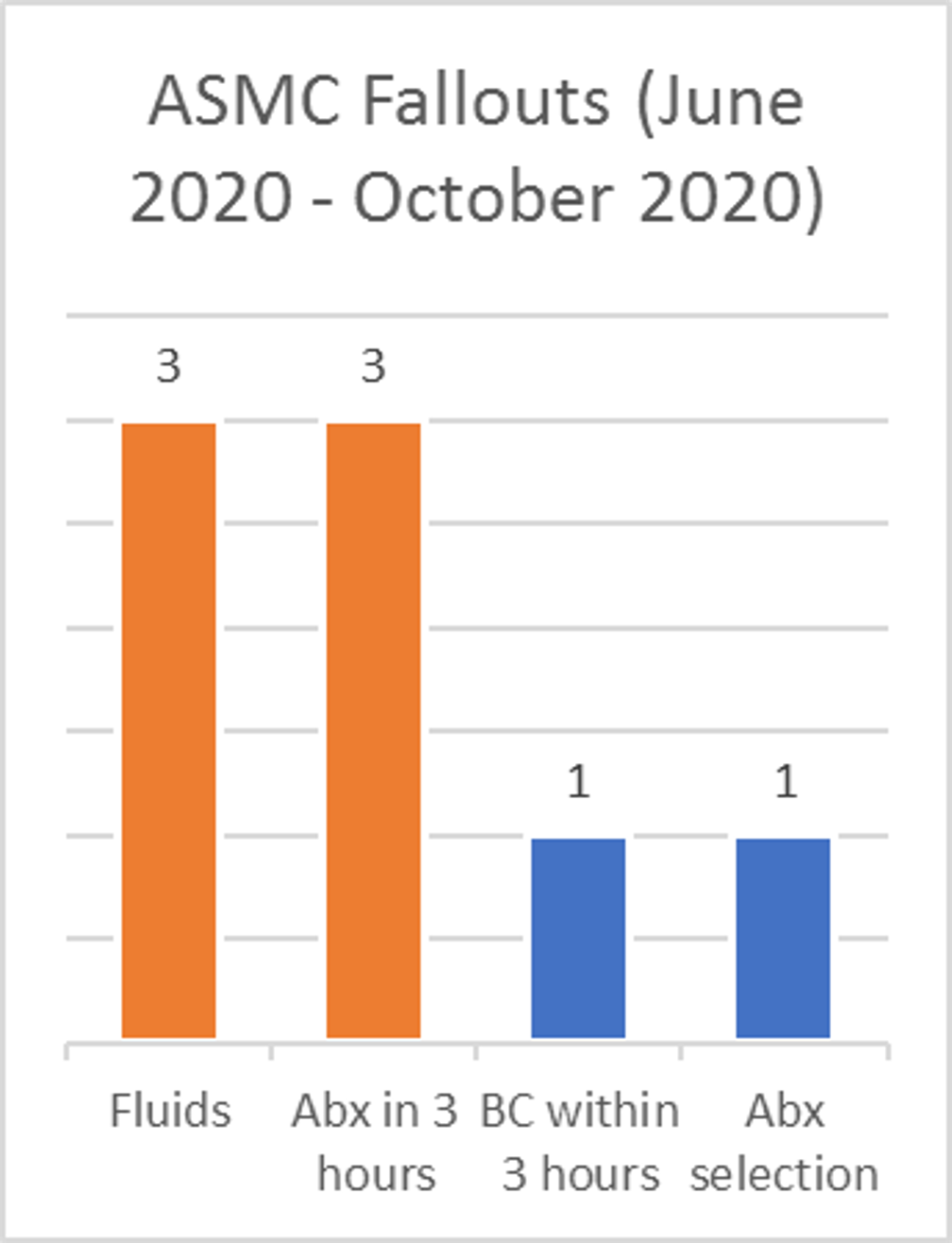