Case Presentation: Introduction:Systemic lupus erythematosus (SLE) is a chronic autoimmune disorder that most commonly affects younger women. Late onset SLE is relatively rare and represents a specific subgroup. Laryngeal involvement in SLE is uncommon and has a wide range of disease severity.
Case:
A 68 year old female patient with history of diabetes mellitus type 2, chronic kidney disease III (baseline serum creatinine of 2 mg/dl) and recently diagnosed pulmonary hypertension after a right heart catheterization presented to the emergency room with odynophagia, hoarseness and dyspnea of a week duration. She had a flexible nasopharyngolaryngoscopy (NPL) which showed an ulcer at the base of the tongue and marked laryngeal edema. She was also found to have an elevated serum creatinine level at 3.12 mg/dl. She was admitted to the intensive care unit for airway monitoring. She had a biopsy of the tongue ulcer which showed nonspecific inflammation without atypia. She received Dexamethasone for her laryngeal edema. She initially improved however 2 days later she experienced acute hypoxic respiratory failure requiring noninvasive positive pressure ventilation and later mechanical ventilation. Chest X-ray and CT thorax were consistent with pulmonary edema. She was also noted to have anuria at that time with a rising serum creatinine level at 4.44 mg/dl. She had pinkish bloody tracheal aspirate which raised concerns for diffuse alveolar hemorrhage, as a result an autoimmune workup was done. This was positive for ANA, anti dsDNA antibodies and hypocomplementemia (low C3,C4). She was started on continuous veno-venous hemofiltration and underwent a renal biopsy. Pathology was positive for background diabetic glomerulosclerosis by light microscopy, weak full house pattern by immunofluorescence corresponding to occasional subendothelial and rare mesangial deposits by electron microscopy. This was felt to be representative of class III lupus nephritis. She was continued on Dexamethasone and Mycophenolate Mofetil was added to her immunosuppressive regimen. She had improvement in her urinary output and respiratory status thereafter and was able to be successfully liberated from the ventilator and dialysis was discontinued. She had repeat NPL a week after which showed improvement in laryngeal edema. She was eventually able to be discharged on Prednisone and Mycophenolate and was seen in the rheumatology clinic multiple times after.

Discussion: Late onset SLE is relatively uncommon and represents a diagnostic challenge as it usually lacks the common features of malar rash and photosensitivity associated with SLE, furthermore, nephritis is less common in patients with late onset SLE. The patient in our case had a very atypical presentation with pulmonary hypertension, lupus laryngitis and anuric acute kidney injury due to lupus nephritis complicated by pulmonary edema and hypoxic respiratory failure. Laryngeal involvement in SLE varies from mild ulceration, edema and vocal cord paralysis to necrotizing vasculitis with airway obstruction. Treatment of late onset lupus is similar to treatment of SLE in younger patients, however clinicians should be mindful of the fact that older patients are more prone to the side effects of immunosuppressive therapy. 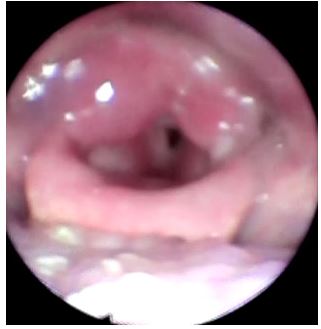 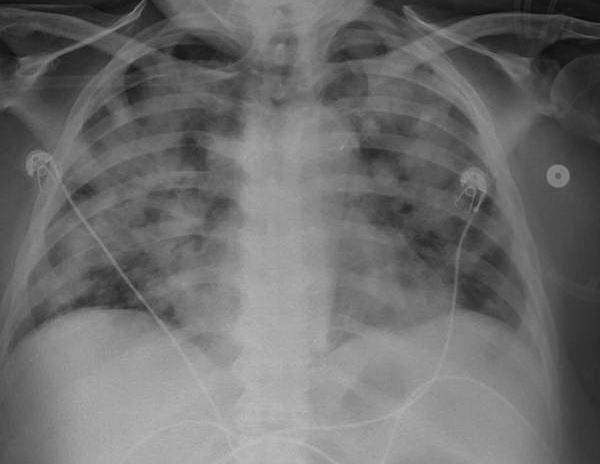