‘THOSE WORMS DID NOT WANT TO BE EXTRACTED’: A CASE OF ASCARIS LUMBRICOIDES BILIARY OBSTRUCTION AND CHOLANGITIS

Case Presentation: A 24 year old, Chuukese-speaking woman visiting the United States from Micronesia, with no known past medical history, presented with complaint of 24 hours of acute epigastric pain. Patient was on no medications. Vital signs: temperature 36.4 degrees C, pulse 65, respirations 16, blood pressure 100/51. Exam showed mild epigastric and right upper quadrant tenderness to palpation, with no rebound or guarding. Lab results: white blood cell count 11.4 (initially 3.1% eosinophils, subsequent lab draws with up to 11.9% eosinophils), hemoglobin 10.5, amylase 112, total bilirubin 0.7, alkaline phosphatase 320, AST 76, ALT 102, other lab results within normal limits. CT abdomen and pelvis with IV contrast showed abnormal soft tissue mass in the right hepatic lobe, 7.5cm in maximum dimension, moderate biliary dilatation, and presumed biliary obstruction. Empiric piperacillin-tazobactam was begun for biliary obstruction, possible cholangitis, and abscess. Pancreatobiliary consult service recommended MRCP; this showed long linear filling defects within the common hepatic and common bile ducts suggestive of ascariasis, and 6X6cm R hepatic abscess. Infectious disease consult recommended continued IV antibiotics for hepatic abscess and cholangitis, oral albendazole (400mg, one dose), stool testing for ova and parasites (O and P), and ERCP to clear the bile duct. Ova and parasite testing was positive for Ascaris lumbricoides eggs. An ERCP was performed and demonstrated 2 Ascaris worms in the common bile duct. When extraction was attempted, the worms were still alive and actively resisted extraction per our advanced endoscopist, despite the albendazole dose. They were eventually successfully extracted through the ampulla (see image 1) and out through the mouth (see image 2), with subsequent purulent discharge from the ampulla. Spincterotomy was performed, and biliary mini-stent was placed. An additional dose of oral albendazole was given, the patient completed a 7 day course of piperacillin-tazobactam for the obstruction-related hepatic abscess, and the patient’s illness resolved.

Discussion: Ascariasis is one of the most common human helminthic infections, involving millions of people in countries with poor access to water, sanitation, and hygiene. Cases in the United States are less common, and most commonly seen in visitors or immigrants from other countries. Morbidity from adult ascaris infection is most commonly localized to the lung (Loeffler syndrome) or to the gastrointestinal tract (bowel obstruction, bleeding, and biliary obstruction causing pancreatitis, cholangitis, cholecystitis, and hepatic abscess). It is generally suspected by history and demographics, and diagnosed by O and P testing. Treatment with single-dose albendazole or mebendazole is recommended, and a single dose cures 85% of affected individuals. In patients with resistance to a single dose, by persistently positive O and P testing or persistent living organism (as in this case), repeated albendazole dosing is recommended.

Conclusions: Though common in endemic countries, biliary disease secondary to ascariasis is relatively rare in the United States. Like all regionally atypical diseases, it must be suspected to be diagnosed. In this case, it was suspected based on patient’s social history and subsequent eosinophilia. Ideally, an advanced endoscopist will extract dead worms after treatment with albendazole- but if worms are extracted alive, further albendazole treatment is warranted. 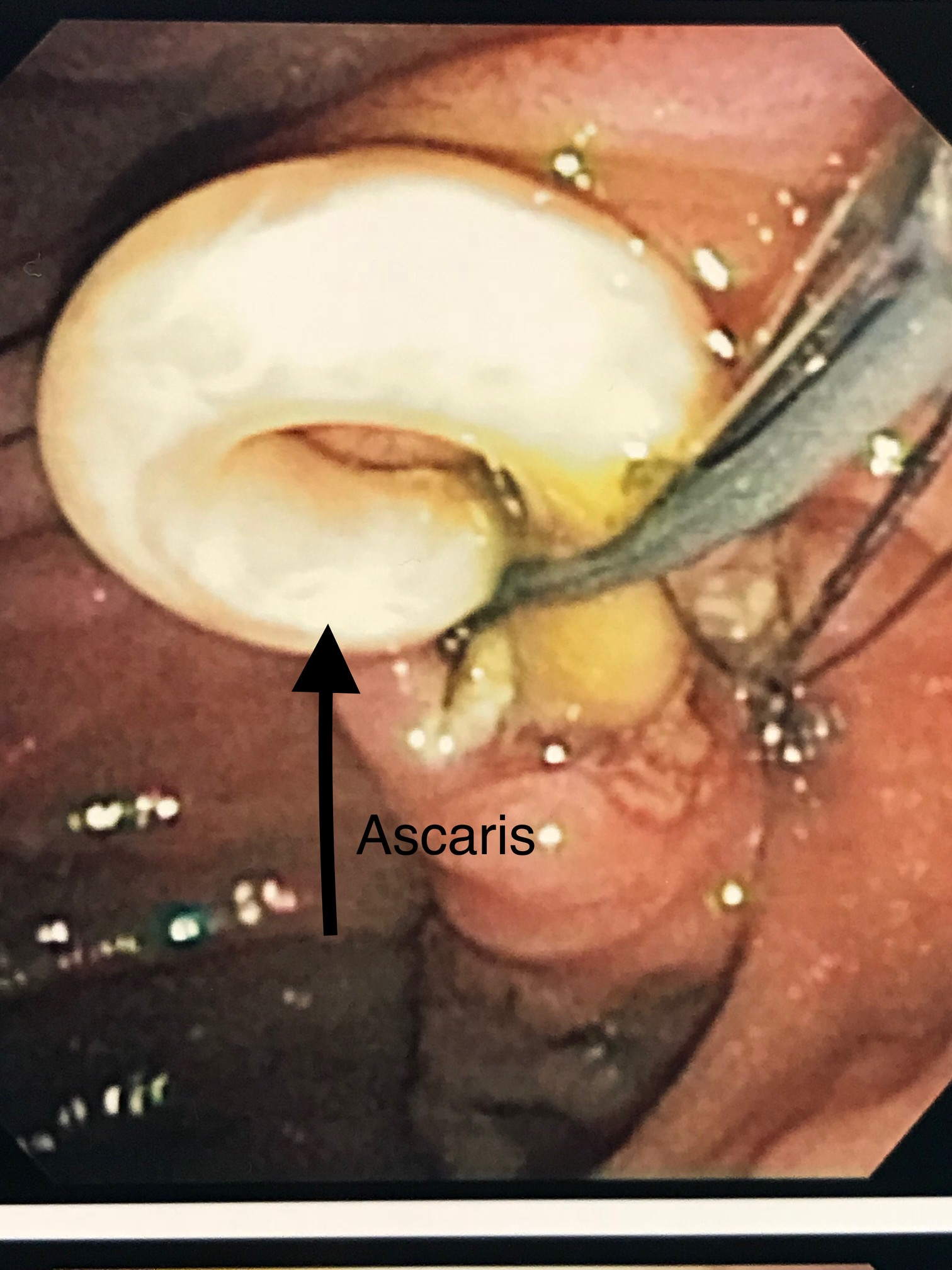 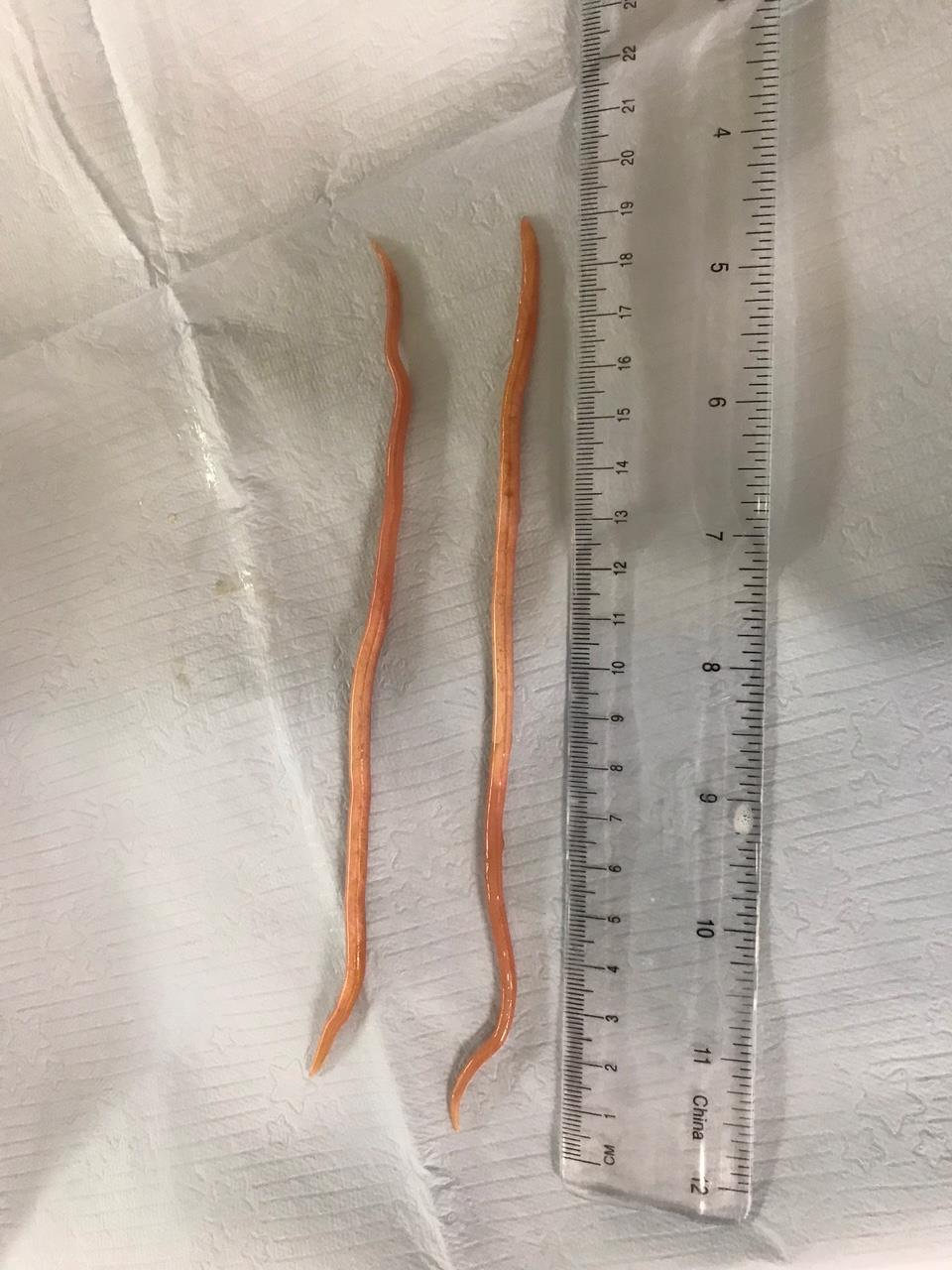 ‘THOSE WORMS DID NOT WANT TO BE EXTRACTED’: A CASE OF ASCARIS LUMBRICOIDES BILIARY OBSTRUCTION AND CHOLANGITIS.