ALK-POSITIVE B-CELL LYMPHOMA TREATED WITH CRIZOTINIB: A RARE CASE AND REVIEW OF THE LITERATURE

Case Presentation: A 20-year-old male presented with low back pain, lower extremity weakness, and bladder incontinence and was subsequently found to have cord compression due to lytic lesions found in his cervical, thoracic, lumbar, and sacral spine. The pathology from the sacral biopsy revealed ALK positive LBCL. The biopsy was positive for plasma cell markers CD138 and MUM1 with lambda light chain restriction and a (2;17) translocation. He had negative expression of common B cell markers including CD19, CD20, and CD22. PET/CT imaging revealed diffuse metastatic disease in the axial and appendicular skeleton and hypermetabolic activity in the liver and spleen (see image 1). He subsequently completed two cycles of methotrexate and cytarabine with rituximab and intrathecal chemotherapy (R-Hyper-CVAD part B) and unfortunately progressed. He then completed two cycles of cyclophosphamide, vincristine, doxorubicin, and dexamethasone with rituximab and intrathecal chemotherapy (R-Hyper-CVAD part A). During his fourth cycle, he was started on crizotinib and has received two total cycles with good response (see image 2). Due to his lack of CD19 expression, he is not a candidate for CAR-T therapy. He is preparing to undergo bone marrow transplantation.

Discussion: Diffuse large B-cell lymphoma (DLBCL) is the most common subtype of non-Hodgkin lymphoma, accounting for 25-30% of all cases [1]. Generally, DLBCL tumor cells express antigens that include CD19, CD20, CD22, CD45, and CD79a. Most DLBCL tumors possess rearrangements in the immunoglobulin heavy and light chains as well as somatic mutations of the variable regions. One very rare variant of DLBCL is anaplastic lymphoma kinase (ALK) positive lymphoma that may be considered a late B cell tumor or “plasmablastic” [2]. Typically, these tumors lack common B cell antigens CD19, CD20, CD79a, PAX5 and instead possess plasma cell antigens like CD138 that are generally absent in typical B cell lymphomas.ALK positive LBCL was identified as a clinically distinct subtype of lymphoma in 2008 by the World Health Organization Classification of Lymphoid Neoplasms with less than 150 cases described in the literature [3]. A large retrospective review of 134 cases revealed a male to female predominance of 3.5:1 and a median age of 35 [4]. Most cases were variably positive or negative for the common B cell markers CD20, CD79a, and PAX5 and highly positive for plasma cell markers like CD138 (94%) and MUM1 (83%). Our patient’s tumor was weakly positive for CD138, expressed MUM1, and was negative for other common B cell markers. Treatment of ALK positive LBCL has typically involved CHOP or CHOP-like regimens with poor response, as the overall survival over 5 years is 34%. ALK-inhibitors like crizotinib which have been used to treat ALK positive lymphomas have demonstrated good, albeit limited, results [7]. Our patient has undergone 4 cycles of R-HyperCVAD with crizotinib with the eventual plan to undergo bone marrow transplantation.

Conclusions: This case demonstrates a rare subtype of DLBCL with a poor prognosis. Further case studies including this one will aid clinicians attempting to treat this disease, as there is minimal data supporting beneficial therapies.

IMAGE 1: Extensive osseous involvement in a patient with ALK+ diffuse large B-cell lymphoma prior to therapy 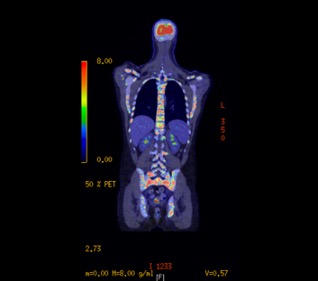 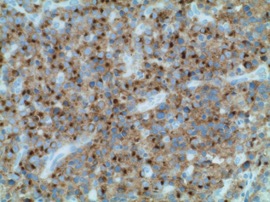 ALK-POSITIVE B-CELL LYMPHOMA TREATED WITH CRIZOTINIB: A RARE CASE AND REVIEW OF THE LITERATURE.