AN UNUSUAL CULPRIT FOR BRADYCARDIA

Case Presentation: A 65-year-old male with a past medical history of bladder cancer, chronic kidney disease stage 3, colon cancer s/p colectomy with colostomy 2016, chronic hypotension on midodrine who presented initially with three days onset of inability to tolerate oral intake due to nausea, vomiting, and increased colostomy output. Other positive findings on the initial review of the systems were for weakness, dizziness, dysuria, and decreased urinary output.On presentation afebrile, hypotensive (69/46 mmHg), oxygen saturation 92% on room air, and tachycardic at 100 bpm. Initial Physical exam was unremarkable, complete blood count unremarkable. Initial labs were significant for acute kidney injury on chronic kidney injury with combined severe metabolic acidosis with concomitant respiratory acidosis. Creatinine of 15.6 mg/dl baseline 2.5, blood urea nitrogen of 133 mg/dl, bicarbonate of 10mmol/, severe hyponatremia of 120 mmol/L, hypokalemia of 3.2, and an anion gap of 23. Venous blood gases showing PH of 7.13, PCO2 of 30 and Bicarb of 10, serum osmolarity of 306 most/kg, lactate was within normal limit.Patient abdominal ultrasound and CT abdomen pelvis did not show any acute changes. The patient was started on intravenous fluids, he was also started on bicarbonate drip and received 2ug of desmopressin, also the midodrine dose was increased from 5mg twice daily to 5mg thrice daily. Patient acute kidney injury, severe metabolic acidosis, and hyponatremia improved with intravenous fluid resuscitation and above management without needing dialysis. He was able to tolerate food and was transferred to the floor on day 3 of hospitalization. On the first night on the floor patient developed severe bradycardia two sinus pause episodes, with the second one lasting for 5.7 seconds with a non-conducted P wave and the patient was symptomatic with lightheadedness. Cardiology was consulted, TTE was done which was normal and troponins were normal. The patient was observed on cardiac monitoring with serial EKGs in the morning which were negative. Midodrine was held and patient symptoms were resolved. The patient was discharged with Holter monitoring and which showed no pauses. It was deduced that Midodrine was the culprit for the sinus pauses.

Discussion: It has oral bioavailability of 93% and gets rapidly metabolized to its active metabolite desglymidodrine systemically. Midodrine causes bradycardia by alpha mediated vagal reflex. The elimination half-life of midodrine is 30 minutes and 3 hrs respectively. Our patient was tolerating home midodrine 5mg twice a day for chronic hypotension well, but the acute kidney injury he presented with likely contributed to medicine’s decreased clearance and a thus brief episode of bradycardia lasting few minutes and two sinus pauses. He experienced no other bradycardia episodes after midodrine was stopped with negative TTE and event recorder findings indicate that her episode was likely related to medicine rather than possible underlying heart disease. 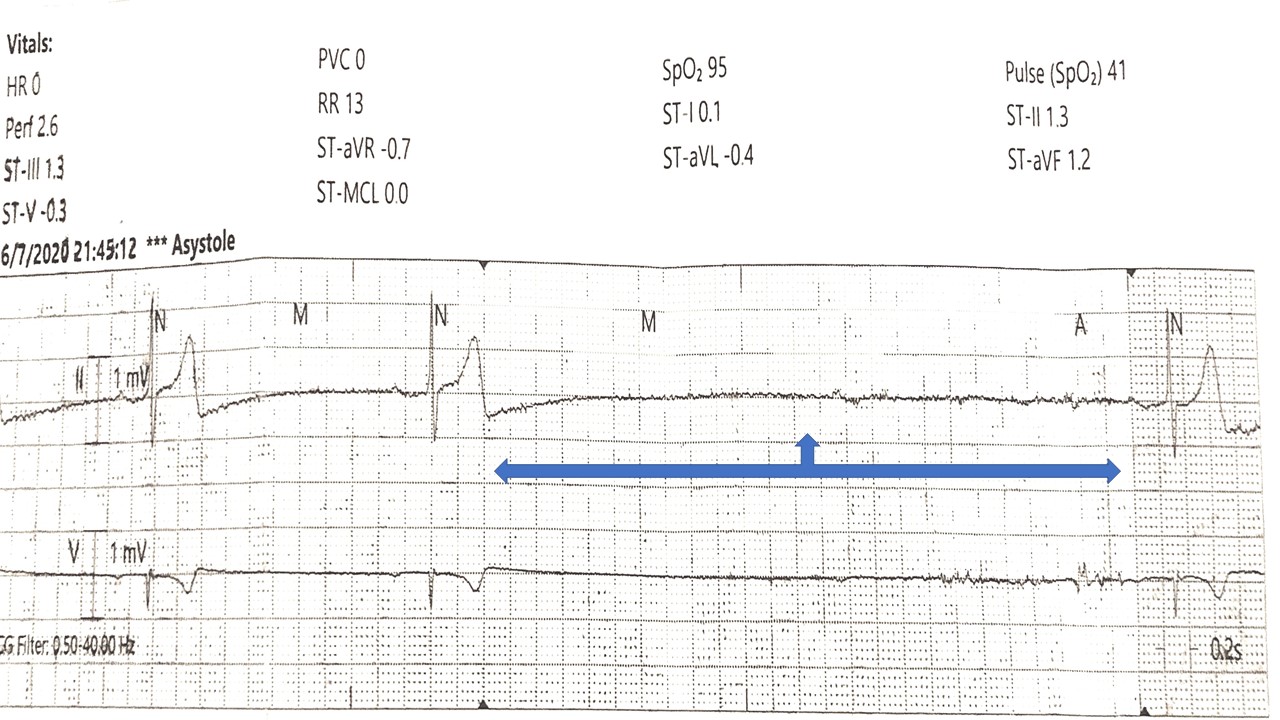 AN UNUSUAL CULPRIT FOR BRADYCARDIA.