Case Presentation: 57-year-old female patient with no significant past medical history presented to the ER with a chief complaint of progressive dyspnea and lower extremity weakness for the past 3 months. Oxygen saturation was 87% on room air. Physical exam revealed bilateral crackles on lung auscultation. Bilateral lower extremities (BLE) had 3/5 strength with a proximal, symmetric pattern of weakness. Labs revealed creatinine of 1.7 mg/dl with unknown baseline, ESR 65 mm, CRP 2.1 mg/dL. Urine analysis showed myoglobinuria and Creatine Kinase (CPK) was 11,000 mcg/L. COVID-19 PCR, D-dimer and respiratory viral panel were unremarkable. Chest X-ray revealed bibasilar interstitial infiltrates. High-Resolution CT (HRCT) scan of the chest showed symmetric peripheral extensive bilateral ground-glass opacities more predominant at the bases. MRI of the BLE showed increased signal uptake in thigh musculature concerning for myositis. In addition to supportive care, the patient was started on prednisone at 60 mg daily. Muscle biopsy from right anterior thigh revealed lymphocyte and macrophage invasion of the muscle. Autoimmune workup was significant for positive Anti-PL7 antibody. The patient was diagnosed with AS as per the Connors et. al criteria. By day 10, the patient had significant improvement in weakness and dyspnea and was eventually discharged with outpatient follow-up and referral for age-appropriate cancer screening.

Discussion: Antisynthetase syndrome (AS) is a rare multisystem autoimmune disease clinically manifested most often by interstitial lung disease (ILD), myositis, and arthritis. ILD is one of the most common clinical features and a major contributor to morbidity and mortality in AS. Manifestations of AS range from myositis, ILD, and non-erosive arthritis to other features such as fever, Raynaud’s phenomenon and mechanics’ hands. For diagnosis, Connors et. al proposed that patients must have the presence of a tRNA synthetase antibody (Anti-Jo-1, PL-7, PL-12, KS, EJ, Zo, OJ, YRS) plus one of the classical clinical features mentioned above. In 15-30% of AS patients, ILD can be the presenting disease manifestation. HRCT is critical in diagnosis and follow-up of AS and invasive testing such as bronchoscopy or biopsy is typically not required to make the diagnosis. Pulmonary hypertension has also been reported making the prognosis even worse. Myositis typically manifests as progressive muscle weakness affecting proximal muscle groups; rhabdomyolysis although uncommon can be associated with AS. Arthritis is more common in patients with Anti-Jo1 positive AS and typically tends to be symmetric, polyarticular and non-erosive. Anti-PL7, anti-PL12, and anti-EJ most commonly present with ILD and can later develop myositis. Glucocorticoids and immunosuppressants such as methotrexate, mycophenolate mofetil and azathioprine, either alone or combined and in severe refractory forms rituximab has shown to improve outcomes. Our patient presented with ILD and rhabdomyolysis in the setting of myositis and ultimately got diagnosed with AS.

Conclusions: A high level of suspicion for AS is warranted in patients with unexplained ILD even in absence of other classical features. AS is often an underdiagnosed and potentially treatable etiology of ILD. A comprehensive autoimmune workup and multidisciplinary approach are important as early treatment can improve outcomes and survival in an otherwise poor prognostic disease. 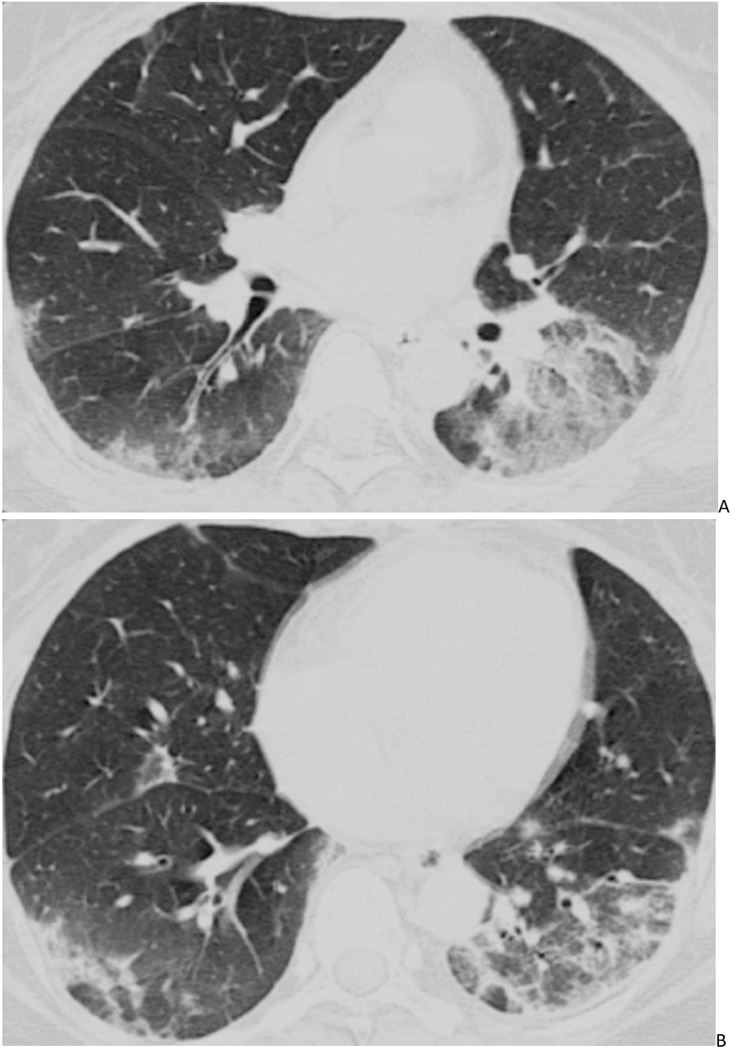