Case Presentation: A 55-year-old woman, with benign past medical history presented with a two-week of low-grade fevers and erythematous papules that evolved into small discrete honey-colored crusted plaques and pustules on her face. She was initially treated with antibiotics for presumed bacterial infection. She had been on Doxycycline for over a week for management of the above condition. She had no family history of skin disorders. Exam: Afebrile, HR:93/min, Blood pressure: 129/62 mmHg. Not pale, anicteric. No oral ulcers noted. Normal cardio-pulmonary findings. Abdomen: Not distended. Not tender with normoactive bowel sounds. CNS: Awake and alert. No motor deficits noted. SKIN: facial rash- Fig 1..Labs; Normal CBC and BMP. CRP was 67. Within 48 hours her hospitalization, she developed fevers, arthralgias, and bloody diarrhea. She developed mild abdominal tenderness but had no guarding. Her knees and ankles were both mildly tender with no effusions noted. The facial rash continued to worsen and progressed to large oozing, thick-crusted vesiculopustular lesions coalescing into plaques with an erythematous base. She had leucocytes in her stools but no enteric pathogens or C.diff toxin. She was seen by a dermatologist and had a shave biopsy of the lesions which revealed intradermal neutrophilic inflammation with ulceration and intracorneal neutrophils without any evidence of microorganisms. On account of her loose bloody stools she had a colonoscopy which revealed patchy inflammation within the sigmoid colon, active colitis with mucosal ulceration, focal areas of cryptitis and focal ileitis . She was diagnosed with Bowel Associated Dermatosis-Arthritis Syndrome (BADAS) and Crohn’s disease.Her antibiotics were discontinued, and she was started on a course of Prednisone which she tolerated well. There was appreciable gradual onset of resolution her facial lesions and the associated inflammation. Her diarrhea and bloody stools subsided. She was discharged with close outpatient follow-up..

Discussion: BADAS was coined by Jorizzo and co-authors in 1984 after cases of Bowel bypass syndrome were detected in patients with inflammatory bowel disease(IBD) and diverticulitis who had not had any bowel surgical procedures. This is a rare systemic presentation of an underlying gastrointestinal disease. It is presumed to result from a type III immune-mediated response to increased systemic circulating levels of sterile bacterial antigens. Classically, BADAS was initially described as a complication following bowel surgery,but has been increasingly been associated with IBD. This is the first known report of BADAS presenting prior to a diagnosis of IBD. Mucocutaneous findings are seen in about 20% -75% of patients with IBD. The most common lesions are erythema nodosum and pyoderma gangrenosum.
A high index of suspicion is required for the appropriate diagnosis to be made when these lesions are seen before a diagnosis of IBD is made. The patient was initially treated with empiric antimicrobials but switched to oral steroid therapy upon suspicion of her diagnosis.

Conclusions: The onset of gastro-intestinal symptoms with the use of or after a course on antibiotics is invariably attributed to side-effects of the culprit medications. Elucidation of exact time line of onset of gastro-intestinal symptoms and associated features such as joint involvement is critical for consideration of IBD. BADAS syndrome requires a high index of suspicion in order to promptly make the accurate diagnosis and initiate the appropriate treatment 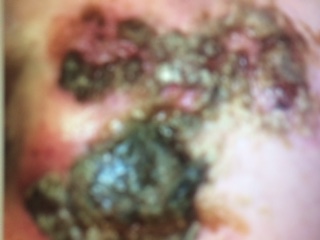 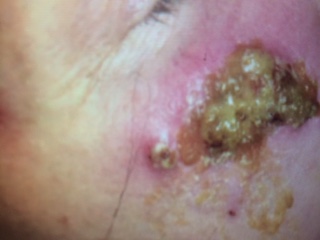