BEHIND THE GOLDEN CURTAIN: THE EFFECTS OF SPENDING REPORTS ON AN INPATIENT MEDICINE SERVICE

Background: Providers are often frustrated by the lack of cost transparency in the US healthcare system. Studies aimed at assessing providers’ knowledge of medical costs generally show poor cost awareness. Pilot studies examining the effects of price transparency initiatives on healthcare utilization have explored a wide variety of formats, and have returned mixed results.

Methods: This was a prospective cohort study of all inpatient admissions to the Internal Medicine service at two different hospitals within the same health system from March 2, 2017 to February 28, 2018. These two hospitals are staffed by the same group of physicians and serve a similar patient population. A record of all diagnostic orders (radiology, laboratory, and microbiology tests) was extracted from the electronic health record and each order was matched to a corresponding Medicare Allowable Charge. This information was aggregated into a personalized Spending Report, which was emailed to providers on a weekly basis outlining the costs of their diagnostic orders and how their ordering practices compared to their peers. These Spending Reports were only delivered to providers at one of the hospitals, with the other hospital group serving as a quality control against system-wide changes in ordering practices. We compared the diagnostic spending in the study period to the baseline spending in the previous year, stratifying by group and using a two-sided T-test and a linear regression model. Spending was normalized by patient volume. Average Length of Stay (LOS) was our main balance measure, controlling against the possibility that decreased diagnostic testing may lead to longer hospital stays.

Results: This study included 26,855 admissions comprising 120,266 total patient-days. Average Length of Stay decreased slightly in both groups. We observed a statistically significant 5.57% decrease in diagnostic spending in the study group receiving weekly Spending Reports, compared to a 5.28% increase in diagnostic spending in the control group [Table 1].Additionally, there appears to be a delay of approximately 3 months from the time of implementation of the Spending Reports before diagnostic spending began to decrease in the study group, suggesting a potentially greater reduction in spending than what we observed [Figure 1].
Anecdotally, the Spending Reports themselves were very well-received by the study group. There were no negative reactions to receiving this information, and feedback from providers was overwhelmingly positive. The peer comparison aspect of these reports often led to friendly competition between providers.

Conclusions: A weekly, personalized Spending Report emailed to providers on an inpatient Internal Medicine service at an academic medical center was associated with a significant reduction in diagnostic spending. Additionally, the Spending Reports were a way to give providers feedback on the cost of their orders and how their ordering practices compare to their peers without increasing or changing their workload. Future studies are needed to determine if this reduction in spending is sustained over time, and whether these results can be replicated in a randomized control trial. 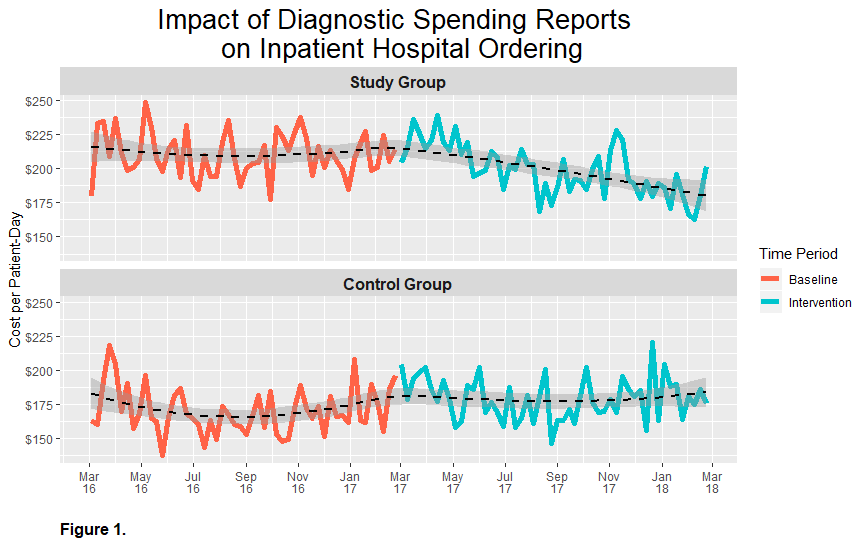 BEHIND THE GOLDEN CURTAIN: THE EFFECTS OF SPENDING REPORTS ON AN INPATIENT MEDICINE SERVICE.