Case Presentation: A 56-year-old female with a history of a deep vein thrombosis (DVT) during pregnancy and dementia presented with dyspnea and acute hypoxemia. Shortly thereafter, she developed persistent fevers and acute encephalopathy. Initial testing, including lumbar puncture, chest x-ray, multiple blood cultures, urine cultures, respiratory cultures, and RPR were all unremarkable. CT head was significant for sphenoid sinusitis. The patient was started on meropenem. Lower extremity ultrasound revealed bilateral DVTs and she was started on heparin therapy. Over nine days, the patient’s platelet count decreased from 250K/uL to 98K/uL. Serotonin release assay confirmed heparin-induced thrombocytopenia (HIT). Heparin products were stopped and argatroban was initiated. Her platelet count recovered 16 days later and she was bridged to warfarin. Her INR increased from 1.91 to 9.39 over the next three days. Argatroban was stopped, repeat INR six hours later revealed an INR of 7.01, and the warfarin dose was held. The following day, the INR was 6.42 and the patient was complaining of right knee pain. She developed purpura over bilateral upper extremities with central necrotic lesions and purpura on her right knee. She also had a well-demarcated purpuric lesion over her distal right foot, which was cool to touch and lacked a pulse. Her functional protein C level was <10% and protein S was 41% at the time of diagnosis. Vitamin K and therapeutic fondaparinux were administered. At the request of the patient and her family, she was referred to inpatient hospice.

Discussion: Heparin-induced thrombocytopenia and thrombosis affect 0.2-3% of heparin-exposed patients. It can lead to venous and arterial thromboses, though venous thromboses are more common. Treatment involves the use of direct thrombin inhibitors while traditionally bridging to warfarin. Warfarin-induced skin necrosis (WISN) is a rare complication that occurs in 0.01–0.1% of patients when used in patients without underlying HIT. HIT and protein C deficiency may be risk factors in the later development of WISN.
It is unclear if the purpuric and thrombotic changes were secondary to warfarin-induced skin necrosis or heparin induced thrombocytopenia thrombosis itself. However, the patient’s markedly decreased functional protein C level favors WISN. One hypothesis for the rapid rise in INR is due to underlying vitamin K deficiency given patient’s malnutrition and antibiotic exposure.

Conclusions: WISN is ingrained as one of the most serious complications of the drug. Although a rare phenomenon, the likelihood increases in the setting of HIT. Given the association of WISN with HIT and protein C deficiency, testing protein C levels may identify those at greatest risk. 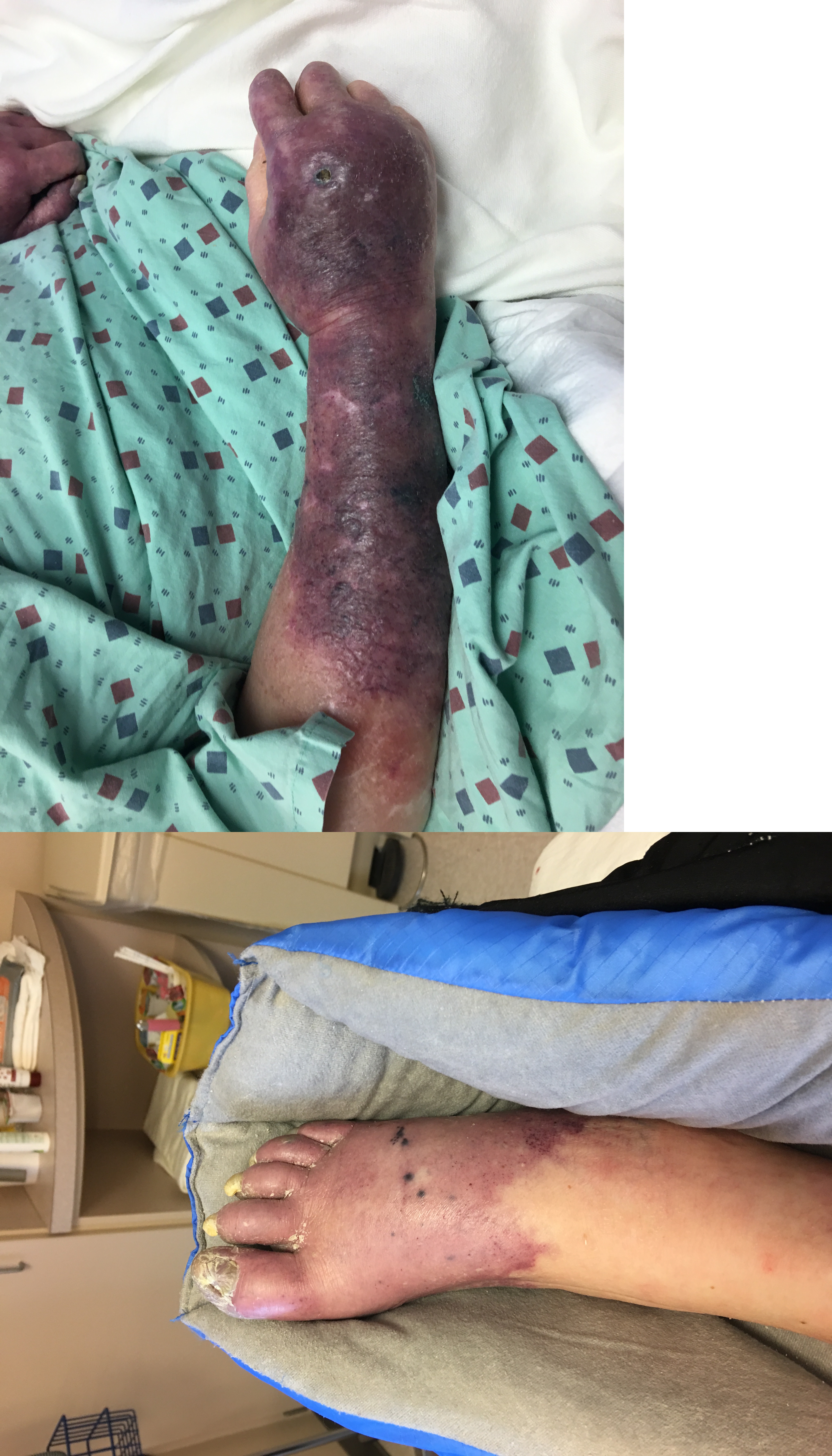