A 33-year-old woman with no cardiac risk factors, who was 8-weeks post-partum with an unremarkable peripartum course, suddenly collapsed at a park. Bystander CPR was initiated and the initial cardiac rhythm, which was ventricular fibrillation (VF), converted to sinus rhythm after defibrillation. While in the emergency department, she had another episode of VF, requiring defibrillation, after which her vital signs were stable, and cardiopulmonary examination was unremarkable. EKG showed 1-mm ST segment elevation in leads V3-V6. An emergent transthoracic echocardiogram revealed a left ventricular (LV) ejection fraction (EF) of 45% with hypokinesis of the distal septum and the LV apex. Emergent cardiac catheterization identified an abrupt decrease in the caliber of left anterior descending artery (LAD), starting from mid-LAD and extending into the apical LAD, suggestive of spontaneous coronary artery dissection and intramural hematoma. Serum troponin reached a peak of 8.20 ng/mL. Medical therapy with aspirin, clopidogrel, Lisinopril, carvedilol, and atorvastatin was initiated, and she underwent implantation of a cardiac defibrillator, before discharge to home. Eight weeks later, a repeat cardiac catheterization showed normalization of LVEF, and complete resolution of the intramural hematoma. Patient remained asymptomatic on subsequent follow up visits.

Spontaneous coronary artery dissection (SCAD) is defined as a non-traumatic and non-iatrogenic separation of the wall layers in a coronary artery, which results in the formation of a false lumen filled with intramural hematoma that occludes the true lumen, leading to myocardial infarction (MI). SCAD, which accounts for only 0.1-0.4% of all cases of acute coronary syndrome (ACS), is increasingly recognized as an important cause of MI in young women without traditional coronary risk factors.

Some predisposing factors for SCAD include fibromuscular dysplasia and connective tissue disorders, such as Ehlers-Danlos syndrome, as well as peripartum state, multiparity, and hormonal therapy. A relatively high incidence in pregnancy is likely related to increase shear stress secondary to high cardiac output and hormonal changes. Patients with SCAD present with sign and symptoms of ACS, including chest pain and sudden cardiac death. SCAD should be considered in the differential diagnosis when coronary angiography reveals non-iatrogenic dissection plane in the absence of coronary atherosclerosis, with a typical radiolucent intimal flap and contrast staining, and most often, as in the case of intramural hematoma, just a decrease in the luminal diameter with preserved side branches. Diagnosis can be confirmed by intravascular ultrasound or optical computed tomography.

Given the absence of randomized trials, the optimal treatment for SCAD, which can range from medical management, to attempted balloon tamponade, to percutaneous or surgical revascularization, remains unknown.

Spontaneous coronary artery dissection is a very rare cause of acute coronary syndrome, which should be considered in the differential diagnosis when a young, postpartum woman presents with signs or symptoms of ACS. Early coronary angiogram is warranted for prompt diagnosis, which can be confirmed with intravascular ultrasound or optical computed tomography. 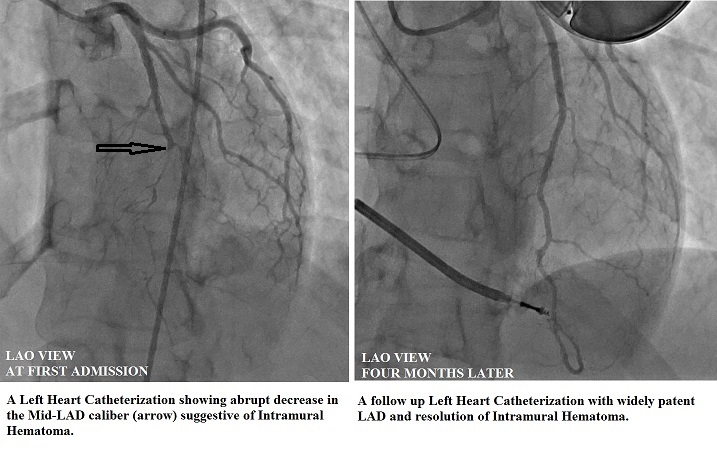