Case Presentation: A 60 year old female was admitted for rapid cognitive and functional decline over 6 weeks. Three months prior, she ceased working as an OR nurse due to depression and emotional outbursts and was being treated by an outpatient psychiatrist for depression. On presentation she was aphasic, echolalic and apraxic with notable outstretched hands, clenching fists and brisk lower extremity reflexes. Her initial workup was all negative and included MRI brain, CBC, ESR, CRP, toxicology, CSF analysis, syphilis, Lyme disease, JC virus and paraneoplastic and autoimmune encephalitis. Patient was treated with benzodiazepines for catatonia, as well as an empiric treatment with steroids and IVIG for possible antibody negative autoimmune encephalitis. Despite these measures she continued to decline. A repeat MRI, 17 days into her hospital course showed cortical ribboning and abnormal left caudate signaling and repeat CSF sampling was positive for RT-QuIC and 14-3-3 protein with an elevated T tau protein >4000 pg/m and an elevated neuron specific enolase of 145 ng/mL, making CJD the most likely diagnosis. Due to the known prognosis of CJD and continued decline to the point of being nonverbal with diffuse hypertonic rigidity, startle myoclonus and concerns for aspiration she was transferred to inpatient hospice.

Discussion: Prions disease is a rare fatal progressive neurodegenerative spongiform encephalopathy that can be acquired, inherited, or most commonly sporadic, with the most common human form being Creutzfeldt-Jakob disease (CJD). This patient lacks known established risk factors for CJD, including corneal transplants, neurosurgeries, or exposure of contaminated dura mater grafts and human pituitary growth hormones. Her history is only notable for her occupation as as an OR nurse. The literature describes previous cases of physicians and nurses developing CJD but there is no conclusive evidence that being a healthcare worker is by itself a risk factor. It has been reported that those who work in physicians’ offices have a statistically significant greater odds for CJD. It has also been shown that prion seeding is possible on the skin and it can bind to stainless steel and surgical instruments especially if there is ineffective sterilization procedures since higher temperatures are needed to deactivate prions. As a result, we should consider the possibility of prion infectivity for both patients undergoing surgeries and healthcare workers that come in contact with surgical instruments. Consequently, we may need to re-evaluate current sterilization processes with the hope to possibly reduce the incidence of CJD thought to be sporadic in nature.

Conclusions: This case report explores the potential occupational risk factors of being a healthcare worker in a patient diagnosed with Creutzfeldt-Jakob disease. This raises the concern that many cases in this population diagnosed as sporadic may in truth be acquired.

IMAGE 1: MRI of the brain shows a signal hyperintensity of cortical gyri known as the cortical ribbon sign 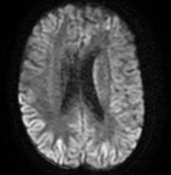