Detecting Sepsis: Are Two Opinions Better Than One?

Background: Early diagnosis and treatment of sepsis improves patient outcomes. Diagnosis requires an objective component (currently at least two Systemic Inflammatory Response Criteria, SIRS) and a subjective, clinical suspicion of infection.  While much attention has been placed recently on the ideal objective criteria to accurately identify sepsis, little is known about the agreement among providers with regards to subjective assessments and the impact of that agreement on patient outcomes.

Methods: We conducted a secondary analysis of prospectively collected data that included all consecutive adult patients hospitalized on a general medicine ward from 4/1/14 to 4/1/15. Bedside nurses (RN) documented their suspicion of infection using a paper-based screening tool every 12 hours. This was compared to the physician or advanced practice professional (MD/APP) suspicion – defined as an existing order for antibiotics or a new order for blood or urine cultures in the 12 hours prior to the nursing screen time. The primary outcome was progression to severe sepsis or septic shock. Concordance rates were assessed using a kappa statistic. A chi-squared test and non-parametric test for trend were used to evaluate for differences in outcomes based on provider agreement.

Conclusions: Discordance between provider suspicion of infection is common, with RNs documenting suspicion earlier and more frequently than MD/APPs.  Suspicion by either provider alone is associated with a moderate risk of sepsis progression. Thus, a collaborative method that includes both RNs and MD/APPs may improve the accuracy and timing of sepsis detection on the wards. 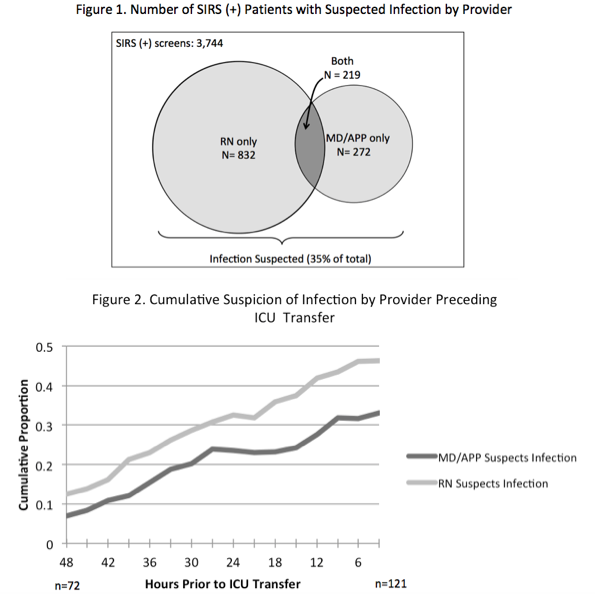 Detecting Sepsis: Are Two Opinions Better Than One?.