DON’T BE ‘PESS’IMISTIC: AN INTRIGUING CASE OF SEVERE NEW-ONSET HYPONATREMIA IN AN ASYMPTOMATIC SEPTUAGENARIAN

Case Presentation: 71-year-old male with extensive smoking history was referred to the hospital by his PCP for new-onset severe hyponatremia of 117mMol/L. He denied any active complaints and initial physical examination showed an euvolemic male. Low serum osmolality of 245mOsm/kg but high urine osmolality of 309mOsm/kg and high urine sodium of 68mEq/L were suggestive of Syndrome of Inappropriate Antidiuretic Hormone (SIADH). CT chest with contrast ruled out lung malignancy as cause for ectopic SIADH. Low morning serum cortisol levels followed by suboptimal cortisol response to co-syntropin stimulation test were noted. Low morning serum adrenocorticotropic hormone levels were suggestive of secondary hypocortisolism. Low T4 with inappropriately normal TSH was suggestive of coexisting central hypothyroidism. Due to this twin hormone deficiency, the idea of pan hypopituitarism was entertained. LH, FSH, IGF levels were found to be low. Prolactin level was mildly elevated. MRI brain with contrast ruled out pituitary adenoma or stalk compression but revealed complete empty sella and an ectopic pituitary gland in posterior hypothalamus. Levothyroxine and Hydrocortisone supplementation was initiated. Hyponatremia improved to 130mMol/l. Patient was discharged to follow-up with PCP where labs after a week showed normal sodium levels.

Discussion: Initial lab evaluation was suggestive of SIADH, however, further studies led to a diagnosis of underlying hypocortisolism. This is important since undiagnosed, uncorrected adrenal insufficiency could potentially result in significant morbidity and mortality, particularly during periods of stress. Further in our case, findings of hypocortisolism and hypothyroidism eventually led to diagnosis of hypopituitarism and radiological finding of Primary Empty Sella (PES). It is important to differentiate primary from secondary empty sella since management differs. Our patient likely had PES because secondary causes (such as prior brain radiotherapy or pituitary surgery, cerebral trauma, pseudotumor cerebri, autoimmune disease) were not apparent. Although deficiencies involving multiple axes are common, panhypopituitarism is rare, described in 2% of PES cases. The finding of an ectopic pituitary is a very rare condition. A functional ectopic pituitary gland may explain our patient’s survival into old age without depending on hormonal supplementation but the sudden, delayed onset hyponatremia and hypopituitarism remains an odd presentation.

Conclusions: Our case showcases the complete workup for severe hyponatremia which is commonly seen in the hospitalized patient population. Euvolemic hyponatremia requires evaluation for SIADH and exclusion of hypoadrenalism and/or hypothyroidism. Even in an asymptomatic adult presenting with PES, studies to determine hypothalamic-pituitary axis dysfunction should be considered as suggested by our patient’s subtle presentation. An endocrine abnormality with concomitant radiological evidence of PES should be diagnosed as PES Syndrome (PESS). This can enable us to institute appropriate and timely treatment, prior to hospital discharge, if any critical hormone deficiencies are found to be present. 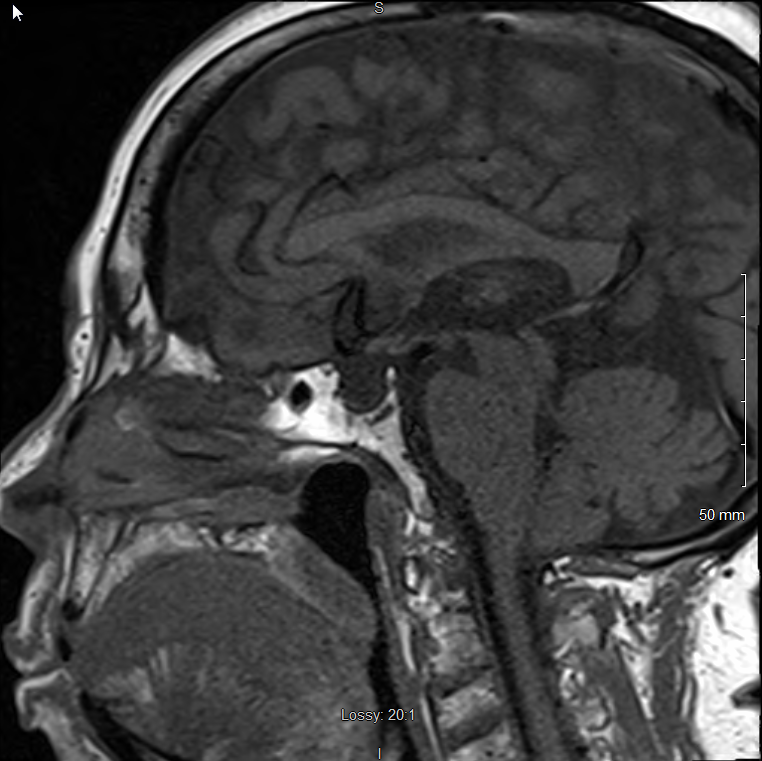 DON’T BE ‘PESS’IMISTIC: AN INTRIGUING CASE OF SEVERE NEW-ONSET HYPONATREMIA IN AN ASYMPTOMATIC SEPTUAGENARIAN.