We conducted this randomized crossover trial on the general medicine inpatient teaching service of a 450‐bed public hospital during the 2009 academic year. We divided the inpatient service of each attending physician who was scheduled for at least 6 weeks in a random sequence of 2‐and 4‐week rotations. On the last day of each 2‐ or 4‐week rotation, attending physicians completed a confidential, self‐administered questionnaire. We measured 3 domains: life stress using 4 items from the Cohen Perceived Stress Scale, emotional exhaustion using 9 items from the Human Services Survey of the Maslach Burnout Inventory, and perceived control in the workplace using 8 items from the Clinic Provider Survey of the Physician Worklife Study II. We generated summary scores for each domain by adding all items within each domain; high scores reflected more emotional exhaustion, life stress, and perceived control. We then subtracted 2‐week summary scores from 4‐week summary scores to generate paired differences by attending and tested the significance of these differences with the nonparametric Wilcoxon signed rank test. We used random‐intercept multilevel models to test for the heterogeneity of the effect of rotation duration between physician subgroups while accounting for correlations within physician.

Among 80 ward attending physicians from the Department of Medicine who staffed a general medicine ward service during the duration of the study period, 62 physicians staffed the service in both 2‐ and 4‐week rotations and were therefore available for this paired analysis. Among them, 18 (29%) were hospitalists, and 44 (71%) were nonhospitalists. Data in Table 1 suggest that among all physicians emotional exhaustion and life stress were lower, whereas perceived control was higher after 2‐week rotations. These differences were more pronounced among nonhospitalists, but the heterogeneity of these differences by physician subgroups (the interaction term) reached statistical significance only for perceived control. 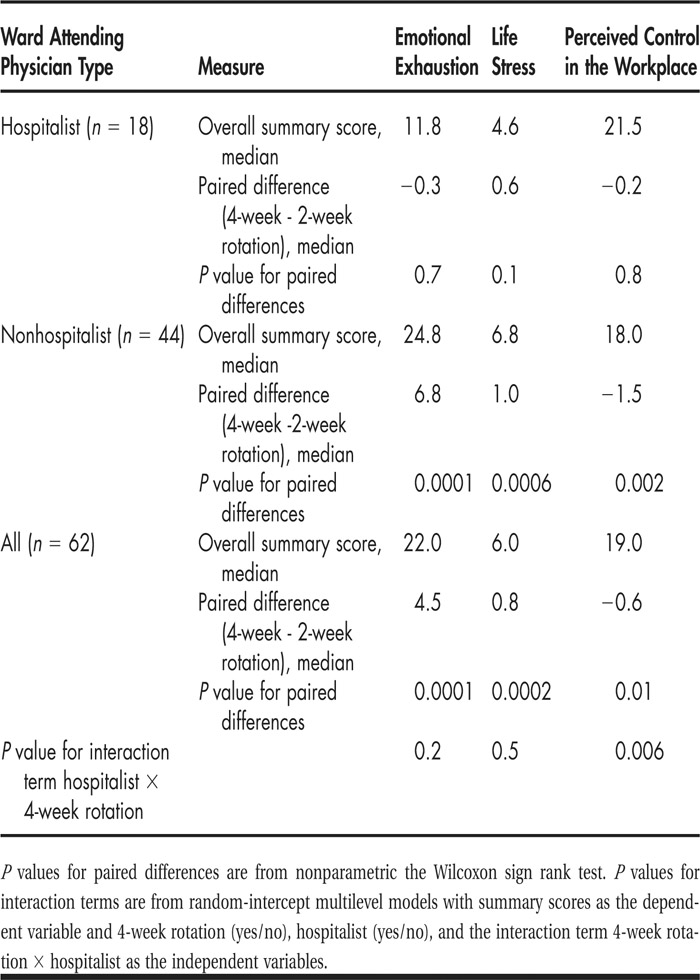