FROM A BURN SCAR TO MALIGNANCY! MARJOLIN’S ULCER, A DISEASE OF WOUND NEGLECT

Case Presentation: A 63-year-old gentleman with a past medical history of hypertension and remote history of left middle finger burn injury. He was admitted to the hospital with a 2-month history of painless left third finger wound. The wound started as a small mass and progressively enlarged. He reported more than 30-year history of an old burn scar on the same location. His burn wound was asymptomatic and he didn’t seek any medical attention. On examination, the finger showed nodular formation, induration, ulceration and yellowish crust with contact bleeding (Figure 1). Swab culture grew Staphylococcus aureus and he was started on empirical antibiotics. Subsequently, he underwent debridement with wide excision and the biopsy showed invasive well-differentiated squamous cell carcinoma (SCC) involving the margins. Staging computed tomography (CT) scan didn’t show any regional lymphadenopathy or distant metastases. He was diagnosed with Marjolin’s ulcer and subsequently underwent amputation of his finger with excision of distal metacarpal bone to achieve clear margins.

Discussion: Marjolin’s ulcer, originally described by Marjolin’s in 1828, is a rare and aggressive type of SCC originating from previously chronic non-healing inflamed skin or trauma, and often after burns in up to 2% of cases. It commonly arises in the lower limbs and rarely in the digits and It carries a poor prognosis with high regional lymph node metastasis which can reach up to 27.5% depending on the degree of malignancy differentiation. The malignant transformation (latency time) is often slow and takes around 30-35 years to develop. The mechanisms of malignant degeneration is not fully understood and there is no current agreement on the management. Treatment is largely dependent on the biopsy staging with either surgical wide excision (early stage) or amputation (advanced stage). However, the recurrence rate can reach up to 30%. 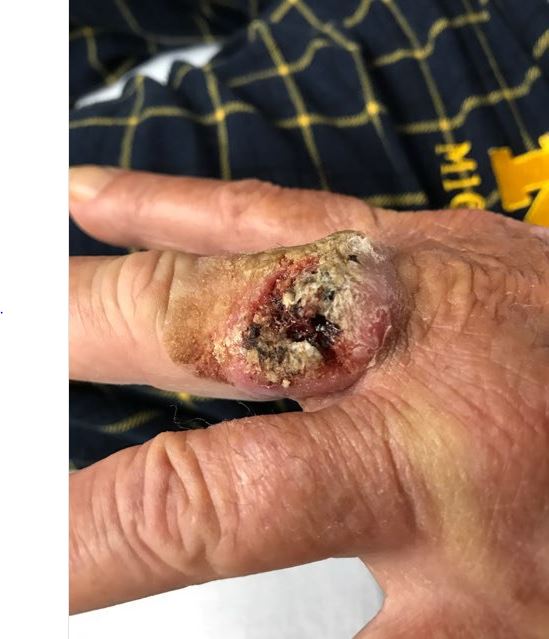 FROM A BURN SCAR TO MALIGNANCY! MARJOLIN’S ULCER, A DISEASE OF WOUND NEGLECT.