FROM THE PROSTATE TO THE HEART: A RARE CASE OF ESCHERICHIA COLI ENDOCARDITIS

Case Presentation: The patient is a 74 year-old male. He has chronic lymphocytic lymphoma, renal cell carcinoma treated with partial left nephrectomy a year ago, cryptogenic organizing pneumonia (on prednisone 15 mg daily), benign prostate hyperplasia, coronary artery disease, hypertension, hyperlipidemia, and gout.He presented with shaking chills and fever for 1 day duration. The symptoms started a week after a prostate biopsy. He denied dysuria, flank pain, or abdominal pain. He had mild nausea without vomiting or diarrhea. His chronic cough had not changed, and there was no dyspnea or upper respiratory symptoms. Vitals showed temperature of 38.8 °C, heart rate of 121/min, a normal blood pressure and oxygen saturation. White cell count was 6 x10(3)/mcL, but increased to 22×10(3)/mcL the next day, creatinine was 1.97 mg/dL (baseline 1.8), lactic acid was 2.4 mmol/L, and urinalysis showed 61 white cells/HPF. Ultrasound showed a non-obstructing stone in the left kidney, and chest computed tomography showed chronic basal fibrotic changes. His exam showed systolic cardiac murmur, without conjunctival hemorrhage or palms or soles lesions. The rest of the exam was normal. He was started on ceftriaxone. Blood cultures cleared the following day. Subsequently the leukocytosis improved to 11x10x3(3).Blood culture later grew Escherichia coli in two sets, which was sensitive to most antimicrobial except aminoglycosides and cephalothin. Subsequent echocardiogram was suspicious for a small semi-mobile mass on the aortic valve with preserved valve function and ejection fraction. This was confirmed with a transesophageal echocardiogram (image 1,2). The patient condition improved and he was discharged on ceftriaxone 2 g daily in combination with ciprofloxacin for the treatment of E.coli endocarditis, which was believed to be acquired after the prostate biopsy.

Discussion: E.coli is the most common cause of gram-negative bacteremia but is a very rare cause of infective endocarditis (IE). E.coli accounts for one third of non-HACEK gram-negative bacilli-induced endocarditis, it is the most common gram-negative bacillus that can cause IE. Risk factors for E.coli endocarditis are older age, preceding urinary tract infection, diabetes and the presence of prosthetic valve. Our patient was an elderly and had a preceding urinary procedure; however, he had a native valve IE, which also is less common given E.coli does not stick to native valves easily as staphylococci and streptococci. The patient had aortic valve endocarditis which is the second most common valve infected in E.coli IE.Endocarditis with E.coli has high risk of complications; early valve replacement is recommended but no clear guidelines for treatment given the low number of cases. Furthermore, combination antibiotics with a B-lactam and an aminoglycoside have been recommended despite observations showed no benefit. We did not use aminoglycosides in our patient given the decreased renal function; instead a fluoroquinolone was used as described in some cases on the literature.

Conclusions: Gram negative endocarditis is rare, but caries high morbidity and mortality. Hospitalists should consider the possibility of endocarditis rather than benign bacteremia in select patients. Early echocardiogram should be considered in some patients with E.coli bacteremia. Aditionally valve surgery is controvertial.

IMAGE 1: Image 1: Round vegetation on the aortic valve 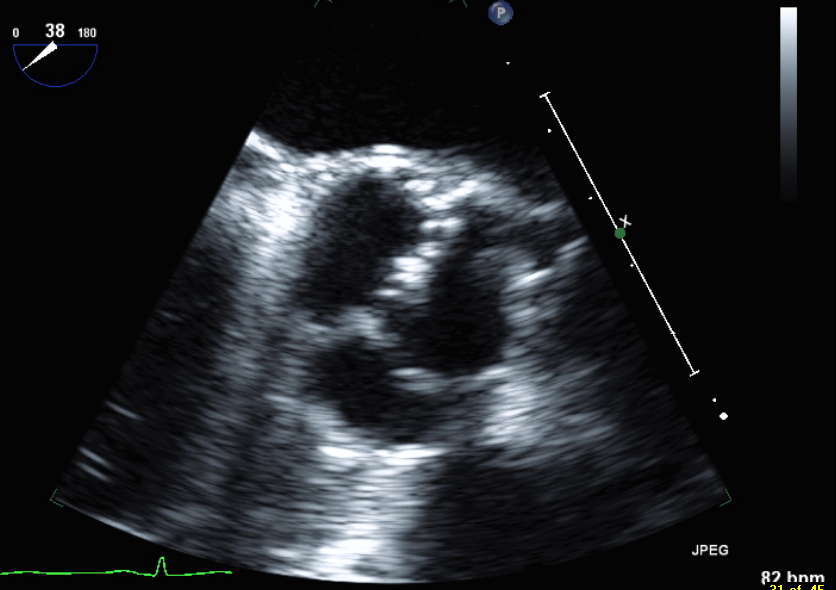 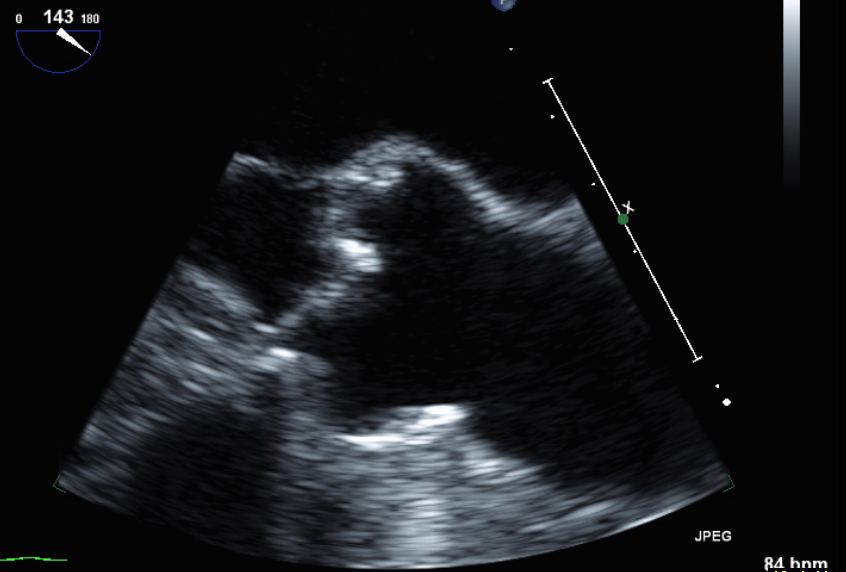 FROM THE PROSTATE TO THE HEART: A RARE CASE OF ESCHERICHIA COLI ENDOCARDITIS.