Case Presentation: An 86-year-old woman with a history of hypertension on oral medications and chronic systolic heart failure presented to the hospital with chest pain and dyspnea. She was noted to be acutely hypertensive, tachypneic and hypoxemic. Physical exam revealed diffuse crackles, jugular venous distention and lower extremity pitting edema. EKG was consistent with an NSTEMI and labs demonstrated an acute kidney injury. The patient was admitted and treated with furosemide, intravenous antihypertensives and supplemental oxygen. After admission, the patient’s respiratory status deteriorated, requiring non-invasive positive pressure ventilation. Bedside lung ultrasound showed diffuse B-lines consistent with cardiogenic pulmonary edema. The patient was transferred to the MICU for emergent intubation. During intubation there was copious red, frothy sputum, concerning for acute pulmonary edema. She became hypotensive and febrile, prompting initiation of vasopressors and antibiotics. Infectious workup was negative and despite initiation of dialysis, she continued to have frothy sputum. Bronchoscopy revealed diffuse alveolar hemorrhage, suggestive of vasculitis. Her autoimmune testing was suspicious for hydralazine induced vasculitis with positive Anti-histone, Anti-dsDNA and Anti-myeloperoxidase antibodies. Urinalysis showed RBCs concerning for pulmonary-renal syndrome. Renal biopsy pathology confirmed drug induced vasculitis. Eventually, the patient died due to her critical illness. While flash pulmonary edema can cause frothy sputum and was consistent with her history, this case highlights the importance of consideration of rare adverse drug reactions as possible causes of critical illness.

Discussion: Drug induced ANCA-associated vasculitis is an uncommon complication of treatment with Hydralazine. Hydralazine is a commonly prescribed medication in patients with refractory hypertension and has shown a mortality benefit in patients with heart failure when combined with isosorbide dinitrate due to its effect on afterload reduction. However, hydralazine can cause a wide range of drug induced syndromes, including systemic lupus erythematosus, toxic epidermal necrolysis, liver injury and vasculitis. Since these are rare complications of hydralazine use, there is often a delay in diagnosis. Our case was unique in that the patient came with a common presentation of hypertension with flash pulmonary edema, but it was due to diffuse alveolar hemorrhage from drug induced vasculitis. Hospitalists admit patients with severe hypertension with and without end organ damage frequently. However, it is important to consider medication induced syndromes when any patient is being admitted. A thorough review of the patient’s medication list and consideration of rare complications of those medications should be performed as part of their differential. This may allow for earlier laboratory testing and an expedited diagnosis.

Conclusions: Here, we characterize an atypical presentation of drug induced vasculitis manifesting as hypertensive emergency with respiratory failure secondary to diffuse alveolar hemorrhage. In the right clinical context, diffuse alveolar hemorrhage may appear as flash pulmonary edema and delay proper diagnosis. Our case demonstrates the importance of identification of the signs of drug induced syndromes allowing for early testing and treatment to improve clinical outcomes. 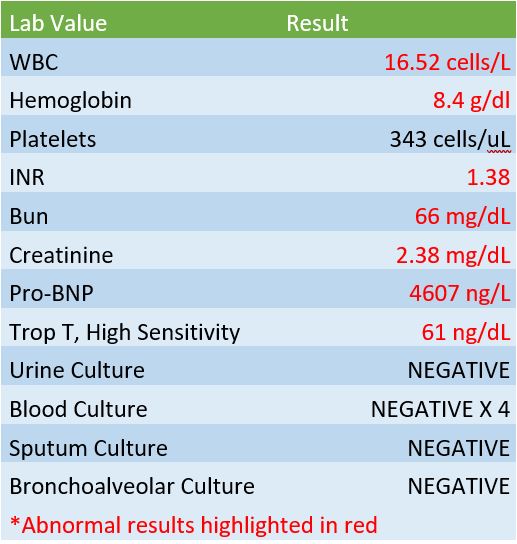 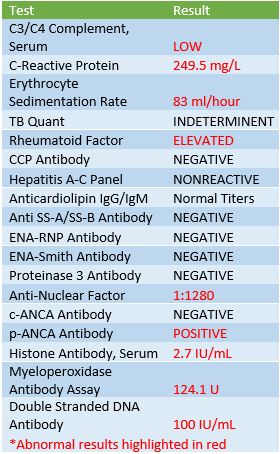