LUPUS CEREBELLITIS: AN UNCOMMON CAUSE OF ENCEPHALOPATHY

Case Presentation: A 29-year-old female with history of systemic lupus erythematous (SLE), hypertension, and cirrhosis presented to the ED with altered mental status and generalized weakness for 3 days. Physical exam revealed tachycardia, abdominal distension and tenderness, and weakness of her lower extremities. Labs showed WBC 17.2, total bilirubin 19.8, AST 106, ALT 19, and ammonia 31. CT head was negative for acute findings. Diagnostic paracentesis was negative for infection. Blood cultures were positive for staphylococcus aureus. Patient was treated with volume resuscitation, culture-directed antimicrobials, and lactulose and rifaximin, with minimal improvement. Lumbar puncture revealed elevated protein and IgG without oligoclonal bands; cultures were negative. MRI brain was concerning for cerebellitis. Infectious workup for this was negative, except for EBV viremia, which improved with supportive care. Double-stranded DNA antibody was normal. Patient was treated with hydroxychloroquine and IV steroids, with gradual improvement in mental status. Autoimmune panel was positive for N- and P/Q-type calcium channel antibodies. Patient received plasma exchange for lupus cerebellitis, with continued improvement in her encephalopathy. She was transitioned to belimumab with continued steroids on discharge.

Discussion: Acute cerebellitis is an inflammatory disorder most commonly seen in children. It is rare in adults. The pathophysiology is not completely understood. The etiology is typically unknown but may be secondary to medications, paraneoplastic or parainfectious causes, or a specific pathogen (e.g., EBV, HSV, or Mycoplasma pneumoniae). It is more frequently seen in females. The most common presenting symptoms are ataxia (94%), headache (88%), nausea and vomiting (88%), and fever (71%). Altered consciousness is seen in only 29% of patients. Treatment is based on the underlying cause and often consists of antimicrobial and antiviral therapies and steroids.[1]Lupus cerebellitis is extremely uncommon and part of a larger group of disorders referred to as immune-mediated cerebellitis. Ahmed et al. reviewed fifteen cases of patients with SLE presenting with cerebellar symptoms. They found that all but one case occurred in females with 80% of patients being between 15 and 34 years of age. Cerebellar involvement was present at the time of SLE diagnosis in five patients, and, with the exception of one patient who was diagnosed with SLE 12 years after cerebellar dysfunction was noted, onset was 1 month to 14 years after SLE diagnosis. MRI abnormalities included hyperintense deep white matter or ischemic lesions and cerebellar atrophy. IgG was elevated in the cerebrospinal fluid (CSF) in six of the seven patients for whom it was measured; protein was often increased as well. Treatments administered included steroids, cyclophosphamide, mycophenolate, and azathioprine.[2]The patient above most likely had lupus cerebellitis. This is supported by the positive N- and P/Q-type calcium channel antibodies, which suggests an autoimmune encephalopathy, as well as the largely unremarkable infectious workup, elevated protein and IgG in the CSF, and improvement with steroids and plasma exchange. A parainfectious cause secondary to the EBV viremia may have also played a role.

Conclusions: Lupus cerebellitis is an exceedingly rare disorder that needs to be considered in any patient with SLE that presents with encephalopathy that persists despite treatment of other potential underlying causes. 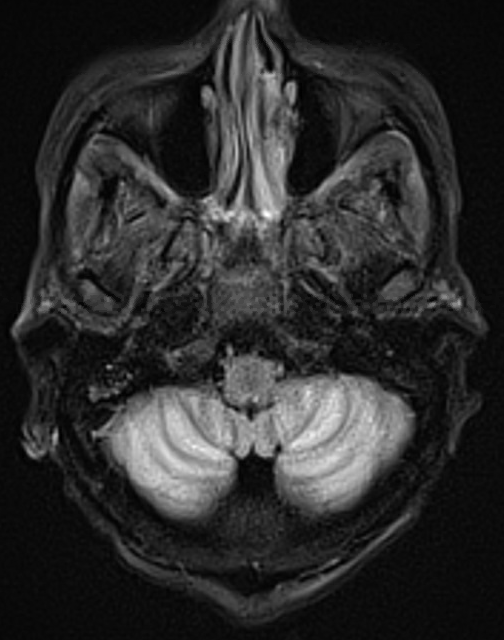 LUPUS CEREBELLITIS: AN UNCOMMON CAUSE OF ENCEPHALOPATHY.