MEDICATION OR METASTASIS? DIAGNOSIS OF ADRENAL INSUFFICIENCY AND HYPOTHYROIDISM IN A PATIENT WITH STAGE IV LUNG CARCINOMA ON PEMBROLIZUMAB

Case Presentation: A 66-year-old female with a history of stage IV non-small cell lung cancer (NSCLC) (90% PD-L1 +) on pembrolizumab (status post cycle 9) with metastasis to the left adrenal gland presented with a two-week history of malaise, nausea, and vomiting. Vital signs were stable and physical exam was euvolemic, with mild epigastric tenderness. Initial workup was remarkable for sodium of 121 mmol/L, potassium of 3.2 mmol/L, bicarbonate of 20 mmol/L, normal albumin, and serum osmolality of 258 mOsm/kg water. The patient was admitted and initially started on a 1-liter fluid restriction for hyponatremia. Endocrinologic workup revealed a low basal (8:00 am) cortisol of 1.7 ug/dL and low-normal ACTH of 19 pg/mL. Cosyntropin stimulation test showed a less than expected increase in cortisol (12.9; normal >18). In addition, free T4 (FT4) was found to be low at 0.8 ng/dL with a normal TSH of 1.17 uIU/L. MRI brain did not suggest metastasis or altered pituitary architecture. Adrenal insufficiency was treated with 10mg of prednisone followed by 5mg daily. Thyroid dysfunction was treated with 50mcg of levothyroxine daily. Both medications were continued on discharge. Sodium improved from 121 to 130 over three hospital days. Outpatient CT Abdomen one day later showed progression of the left adrenal mass with a normal right adrenal gland. Ultimately, cycle 10 of pembrolizumab was held while endocrine disorders were treated.

Discussion: Immune checkpoint inhibitors (ICIs) (e.g., pembrolizumab) continue to gain momentum in the treatment of various cancer subtypes. While these agents have improved outcomes, many immune-related adverse events (irAEs) have been reported. This patient presented with hypocortisolism initially concerning for evolution of her underlying adrenal metastasis. However, this was not supported by workup. Furthermore, metastatic lesions were noted only in the left adrenal gland. The combination of low cortisol with inappropriately low-normal ACTH and low FT4 with inappropriately normal TSH was concerning instead for pituitary dysfunction, specifically hypophysitis. Pembrolizumab, while being an effective treatment for PD-L1 positive NSCLC, has rarely been associated with hypophysitis. As seen in this case, hypophysitis can often present with nonspecific symptoms such as nausea, vomiting, and general malaise. In addition, hypophysitis in patients treated with ICIs does not always lead to findings on brain MRI, giving additional weight to clinical diagnosis. Treatment depends on severity but often involves hormone replacement and, in severe cases, intravenous hydrocortisone. This patient had Grade 2 hypophysitis, which prompted oncology to hold immunotherapy. Further, in cases with adrenal and thyroid dysfunction, it is essential to begin steroid therapy before or alongside levothyroxine. With significant hypocortisolism, initiating levothyroxine before steroid replacement can precipitate adrenal crisis by increasing the rate of metabolism of remaining cortisol.

Conclusions: In patients being treated with ICIs, it is important to consider endocrine dysfunction as a cause of nonspecific symptoms. Treatment of ICI-induced hypophysitis depends on severity; it can include hormone supplementation, holding or discontinuing immunotherapy, and, if severe, intravenous hydrocortisone. In patients with concurrent adrenal and thyroid dysfunction, steroid therapy should be initiated before or alongside thyroid replacement to avoid precipitating adrenal crisis. 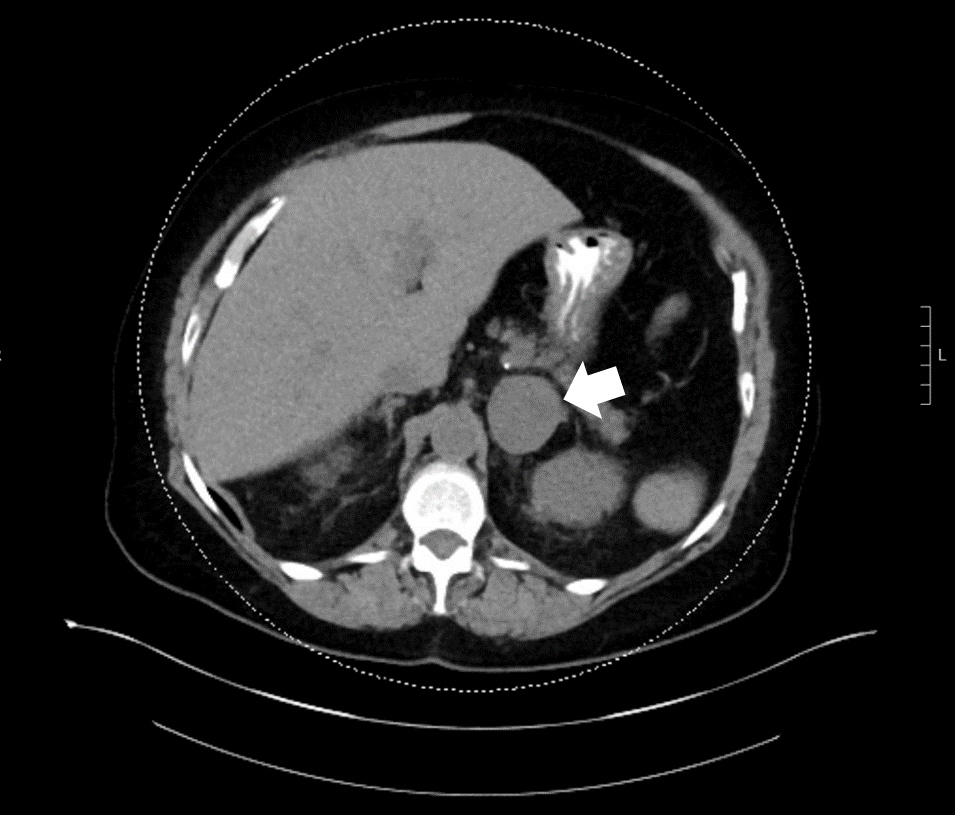 MEDICATION OR METASTASIS? DIAGNOSIS OF ADRENAL INSUFFICIENCY AND HYPOTHYROIDISM IN A PATIENT WITH STAGE IV LUNG CARCINOMA ON PEMBROLIZUMAB.