Case Presentation: A 57-year-old woman presented to the emergency department with confusion, generalized weakness, poor appetite, abdominal pain, depressed mood, and constipation for the past week. She states that she has auditory hallucinations and paranoia and thinks a man is going to kill her which caused her to stay at home. She did not have any significant past medical history besides gastric reflux. Her boyfriend states that she was in normal health a month prior and now is not feeling like herself anymore. She was told by a physician using telemedicine to take antacids during an appointment due to her worsening symptoms of reflux. The patient than ordered a gummy version of the antiacid as she did not like the taste of the regular kind. By the time she realized she had become infatuated with the taste of the gummies and ate 42 bottles of them within a 2-week span. She was admitted to the hospital with symptoms of hypercalcemia and hypercalcemia induced psychosis. Her pertinent labs were a calcium level of 21.3 mg/dl, a pH of 7.8 combined with an HCO3 of 47 which indicated metabolic alkalosis, and a creatinine of 2.7 mg/dl indicating that this was a case of milk-alkali syndrome (MAS). We subsequently ruled out malignancy, hyperparathyroidism, and granulomatous disease as well. We treated her aggressively with IV normal saline at a rate of 200 ml/hr and calcitonin. The patient remained in the hospital for 4 days during which her symptoms receded.

Discussion: Symptomatic hypercalcemia occurs at 12-14mg/dl (3.0-3.5mmol/l) causing symptoms like abdominal pain, decreased appetite, depressed mood, headache, confusion, lethargy, muscle weakness. MAS is now the third leading cause of hypercalcemia only after hyperparathyroidism and malignancy, accounting for 12% of the cases. Other possible causes of hypercalcemia include vitamin D Intoxication and granulomatous diseases. The initial work up of hypercalcemia includes urinary calcium, serum PTH, phosphorous, and 25-OH-cholecalciferol and 1,25 OH2-cholecalciferol. MAS has undergone a resurgence due to the extensive advertisement of calcium carbonate for dyspepsia and increased availability. Our patient presented with the typical signs of hypercalcemia but also presented with psychosis. Hypercalcemia is known to be a cause of psychiatric disturbances but rarely includes psychosis such as in our patient. High calcium levels can lead to neuronal death, possibly due to glutaminergic excitotoxicity coupled with dopaminergic and serotonergic dysfunction. The lab investigations of the MAS show the triad of hypercalcemia, metabolic alkalosis, and variable renal impairment as in our patient. In our patient after treatment with IV normal saline and calcitonin, her symptoms resolved. The pathophysiology (Figure 1) of the milk-alkali syndrome is poorly understood and it is not known why some individuals are affected more than others. Careful history taking is very important as many patients do not include over the counter calcium supplements in their medication history unless specifically asked. Our patient history was known only after her son informed her about her ingestion of Tums.

Conclusions: In patients presenting with symptoms of hypercalcemia, milk-alkali syndrome should be on the differential for physicians as it is an increasingly common cause of hypercalcemia. A detailed history is needed which includes an extensive overview of all over-the-counter medications. 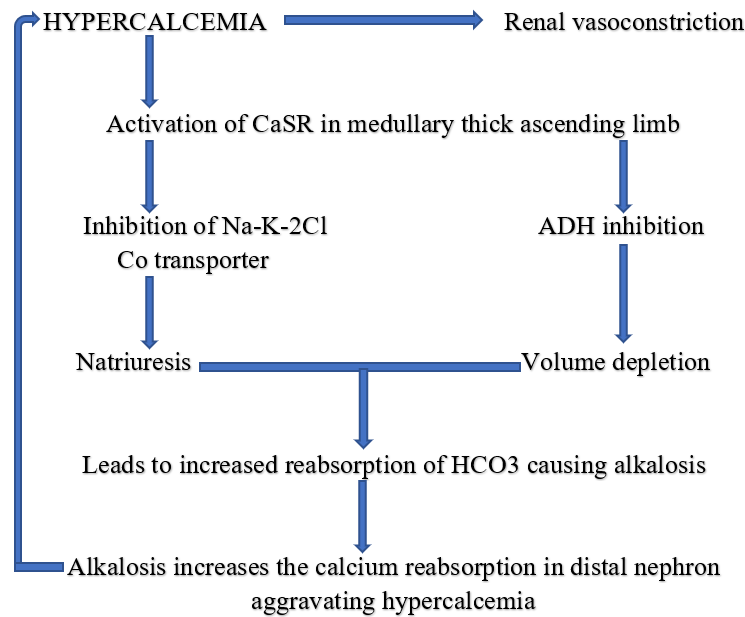 MILK-ALKALI SYNDROME PRESENTING WITH PSYCHOSIS DUE TO AN EXCESSIVE INTAKE OF CALCIUM CARBONATE.