MISTAKEN IDENTITY: A CASE OF AURICULAR PERICHONDRITIS CONFUSED FOR CELLULITIS IN THE SETTING OF INFLAMMATORY BOWEL DISEASE

Case Presentation: A 54-year-old male with past medical history of ulcerative colitis not on active treatment and DM type II presented to his primary care provider (PCP) with right ear pain and swelling which began a week prior. His PCP added oral clindamycin, Cortisporin otic drops, and later prednisone when his pain and swelling did not improve. The patient returned 2 weeks later with unbearable pain with light compression of his right ear and was admitted for treatment-resistant cellulitis. On admission the right auricle was erythematous with mild diffuse edema. The lobule was also erythematous but less edematous and less painful to palpation (Figure 1). The posterior auricular soft tissues were inflamed but the mastoid bone was unaffected (Figure 2). Cellulitis was suspected due to the presence of otologic inflammation and a past medical history significant for diabetes mellitus. After 2 days without improvement on IV vancomycin, antibiotics were advanced to linezolid and IV Zosyn to cover Staphylococcus and Pseudomonas, but this did not result in any improvement either. On day 4 of admission the patient was started on Colchicine for suspected relapsing polychondritis and the inflammation started to resolve. The patient continued to improve on colchicine and was discharged home on day 6 of admission in stable condition with intention to continue colchicine and start adalimumab as an outpatient. The patient’s inflammation completely resolved 2 weeks after starting treatment with adalimumab.

Discussion: Extraintestinal manifestations (EIM) of inflammatory bowel disease are relatively common but are often confused for other disease processes. Compared to common EIM of UC such as arthritis and erythema nodosum, relapsing polychondritis (RP) is a rare.[1][2][3] RP is characterized by bilateral inflammation of cartilaginous structures, particularly those of the ears, nose, and respiratory tract, however during the early acute phase of RP otologic inflammation may be unilateral and concentrated in the cartilaginous auricle.[4] Only two prior cases of UC patients presenting with early symptoms of RP have been reported reported.[5][6] In both cases RP was initially mistaken for cellulitis, resulting in delayed diagnosis and prolonged hospital stay. Hospital physicians should be aware of this presentation because the concentrated inflammation of the auricle can be distinguished from the lobular inflammation characteristic of cellulitis of the ear.

Conclusions: Erythema and inflammation of the ear are common in our patient population, however not all cases should be attributed to cellulitis. During the assessment of otological inflammation investigators should note the location of greatest intensity of inflammation. Erythema and edema of the cartilaginous auricle is more suggestive of underlying chondritis and possible autoimmune etiology. Predominant inflammation the lobule is more suggestive of infectious cellulitis. Proper assessment of otologic inflammation is particularly important in the setting of IBD. This group of diseases is associated with the GI tract, but is known to affect distant organ systems. The extraintestinal manifestations of IBD require more investigation, especially because the disease process is not well understood. As the incidence and prevalence of IBD continues to increase throughout the United States, diagnostic vigilance on part of hospitalists regarding EIM of IBD will become more important than ever before for the ultimate management of these patients. 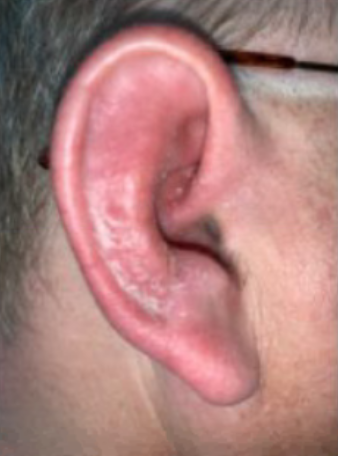 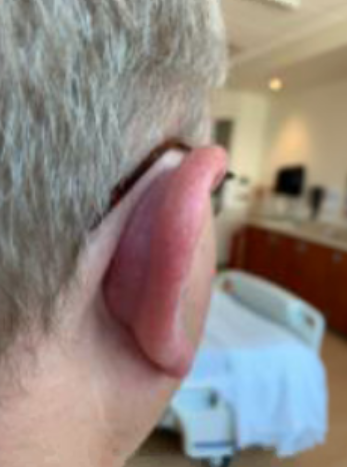 MISTAKEN IDENTITY: A CASE OF AURICULAR PERICHONDRITIS CONFUSED FOR CELLULITIS IN THE SETTING OF INFLAMMATORY BOWEL DISEASE.