Case Presentation: A 20 year old male with past medical history significant for chronic phase CML, diagnosed approximately 1 year prior to admission, presents for evaluation of worsening right leg pain over the past 2-3 months. At the time of diagnosis of CML, he was started on Imatinib and shortly after developed diffuse bone pain. Repeat bone marrow biopsy at 7 months showed minor cytogenetic response on Imatinib and patient was switched to Desatinib, with improvement in bone pain. Repeat bone marrow biopsy at 3 months following initiation of Desatinib showed patient to have complete cytogenetic response. Approximately one month later, patient began to notice worsening pain in his lower back and right hip. A MRI of the lumbar spine showed bulging disks of L3-L5 which was thought to be the cause of the pain. After several months of physical therapy and epidural spine injections the patient’s lower back pain resolved but he continued to have progressive hip pain that became so severe that he was unable to ambulate. On admission, his right lower extremity was exquisitely tender on range of motion testing. MRI of right femur was obtained which showed proximal large mass with bony destruction and extra osseous extension into the adjacent musculature. Biopsy of mass was obtained which came back significant for femoral sarcomatous transformation of patients CML. Hospital stay was complicated by pathologic fracture of the right hip. Given the size and extent of the sarcoma no intervention was possible at the time. He was started on induction chemotherapy (CLA + pinotinib) in an attempt to shrink the mass and subsequently underwent 2 more rounds of consolidation chemotherapy with reduction in size of R femur mass. He is currently being followed as an outpatient by orthopedic surgery for possible surgical intervention and is also being evaluated by bone marrow transplant team for future haploidentical transplant, as his brother has been identified as suitable donor.

Discussion: Sarcomatous transformation of CML is a rare finding that usually occurs later in the natural history of the disease and confers a worse prognosis. Prior studies have reported a 7-17% occurrence of extramedullary disease, often myeloid sarcomas, in patients with CML. Although relatively rare, patients with this finding tend to have a higher risk of going on to develop rapid blastic marrow transformation or often, are found to be in blast crisis at the time of presentation. Management for extramedullary disease depends on previous therapy, type of leukemia, and location and extent of disease. Tyrosine kinase inhibitors continue to be the mainstay of treatment in many cases, but often can require other systemic treatments, localized radiation, and bone marrow transplant. Although quite effective in the management of CML, TKI’s have been shown to be significantly less effective in pts found to have myeloid sarcomatous transformation.

Conclusions: This is a rare case of femoral sarcomatous transformation of CML in a patient that was previously thought to have had complete cytogenetic response on desatinib. Unfortunately, while the patient had cleared his bone marrow of disease, he had not cleared his peripheral blood. This conveys a significantly worse prognosis for our patient and increases his risk of going on to develop future blast crisis. Due to the location and size of the sarcoma our patient experienced significant morbidity, leading to extensive hospitalization. This might have been prevented, had a diagnosis of sarcoma been entertained earlier in the patients course. 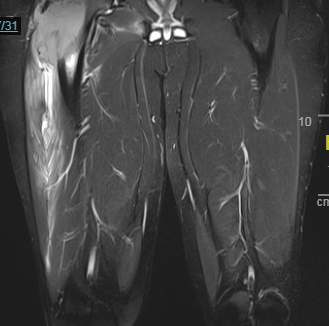