Background: Acute heart failure (AHF) hospitalization is about one million hospital admissions per year and has tripled in the last 30 years in the United States. These illustrate the importance of recognizing early signs of AHF. Therefore, risk stratification can aid physicians in selecting appropriate evidence-based medical therapies. Red blood cell distribution width (RDW) is a numerical measure of the variability in the size of circulating erythrocytes and is incorporated in a CBC. Our study postulated that change in RDW would be associated with longer hospital stays for AHF as well as worse 30-day outcomes in our population.

Methods: A retrospective cohort study was conducted at Hurley Medical Center/ Michigan State University. All electronic medical records of 786 patients 18 years of age and older admitted to Hurley Medical Center in the period between July 2015 and July 2017 with a diagnosis of AHF were obtained. We excluded adult patients who had chronic heart failure with no exacerbation.
We studied the following endpoints: length of stay (LOS), 30-day readmission, and 30-day mortality. The first RDW measured within 24 hours of hospital admission was the initial RDW and change in RDW was determined by subtracting the initial RDW from the last RDW measured within 24 hours prior to discharge.
Simple and multiple linear regression and logistic analyses were used for the associations between demographic variables, clinical variables, and the endpoints.

Conclusions: Our study demonstrated that both initial RDW and change in RDW were useful for risk prediction. The strength of change in RDW in predicting both the length of stay and 30-day mortality shows that it could be beneficial in identifying which patients would benefit from closed monitoring during AHF hospitalization, predicting an appropriate day of discharge and the risk of readmission. 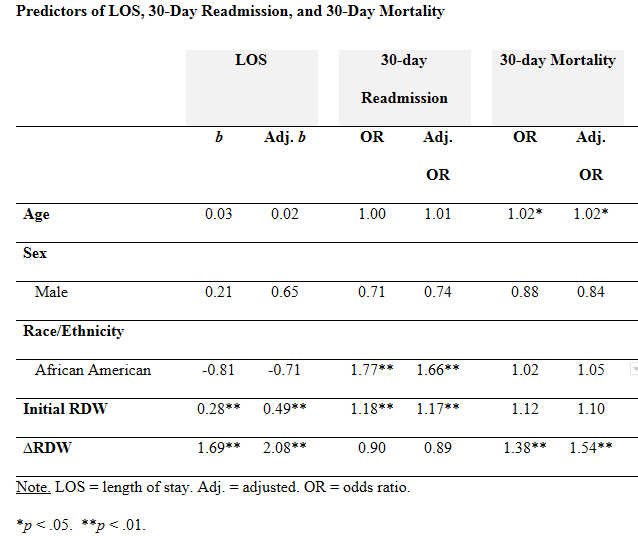 PREDICTIVE ABILITY OF THE CHANGE IN RED CELL DISTRIBUTION WIDTH FOR ACUTE HEART FAILURE HOSPITALIZATION AND BEYOND.